Items related to THE WAY OF THE WORLD: A Story of Truth and Hope in...

Home Suskind, Ronald THE WAY OF THE WORLD: A Story of Truth and Hope in an Age of ...
Stock Image 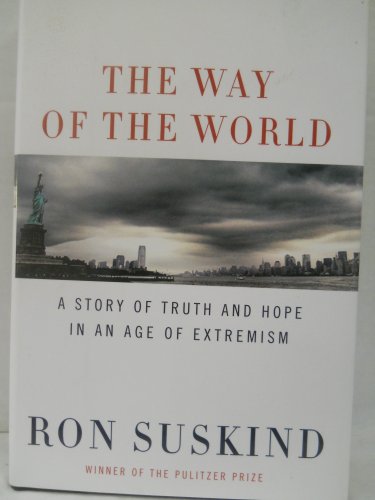 THE WAY OF THE WORLD: A Story of Truth and Hope in an Age of Extremism

Signed by author on title page in black fountain ink. Author also of THE PRICE OF LOYALTY and THE ONE PERCENT DOCTRINE. As new, in as new, mylar-protected dust jacket. NF53. Bookseller Inventory # 020806

From Pulitzer Prize–winning journalist and bestselling author Ron Suskind comes a startling look at how America lost its way and at the nation's struggle, day by day, to reclaim the moral authority upon which its survival depends. From the White House to Downing Street, from the fault-line countries of South Asia to the sands of Guantánamo, Suskind offers an astonishing story that connects world leaders to the forces waging today's shadow wars and to the next generation of global citizens. Tracking down truth and hope within the Beltway and far beyond it, Suskind delivers historic disclosures with this emotionally stirring and strikingly original portrait of the post-9/11 world.

In a sweeping, propulsive, and multilayered narrative, The Way of the World investigates how America relinquished the moral leadership it now desperately needs to fight the real threat of our era: a nuclear weapon in the hands of terrorists. Truth, justice, and accountability become more than mere words in this story. Suskind shows where the most neglected dangers lie in the story of "The Armageddon Test" —a desperate gamble to send undercover teams into the world's nuclear black market to frustrate the efforts of terrorists trying to procure weapons-grade uranium. In the end, he finally reveals for the first time the explosive falsehood underlying the Iraq War and the entire Bush presidency.

While the public and political realms struggle, The Way of the World simultaneously follows an ensemble of characters in America and abroad who are turning fear and frustration into a desperate—and often daring—brand of human salvation. They include a striving, twenty-four-year-old Pakistani émigré, a fearless UN refugee commissioner, an Afghan teenager, a Holocaust survivor's son, and Benazir Bhutto, who discovers, days before her death, how she's been abandoned by the United States at her moment of greatest need. They are all testing American values at a time of peril, and discovering solutions—human solutions—to so much that has gone wrong.

For anyone hoping to exercise truly informed consent and begin the process of restoring the values and hope—along with the moral clarity and earned optimism—at the heart of the American tradition, The Way of the World is a must-read.

RON SUSKIND is the author of The Way of the World, The One Percent Doctrine, The Price of Loyalty, and A Hope in the Unseen. From 1993 to 2000 he was the senior national affairs writer for The Wall Street Journal, where he won a Pulitzer Prize. He lives in Washington, D.C.