Items related to WHAT WAS SHE THINKING?: Notes on a Scandal: A Novel

Home Heller, Zoë WHAT WAS SHE THINKING?: Notes on a Scandal: A Novel
Stock Image 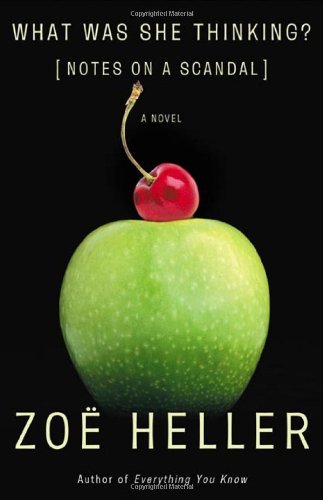 WHAT WAS SHE THINKING?: Notes on a Scandal: A Novel

Heller's much-praised second novel, following EVERYTHING YOU KNOW and preceding THE BELIEVERS. WHAT WAS SHE THINKING? is the basis of the movie 'Notes on a Scandal,' starring Judi Dench and Cate Blanchett and which features great performances from both of them. WHAT WAS SHE THINKING? was shortlisted for the 2003 Man Booker Prize. Fine, in fine, mylar-protected dust jacket.Fine, in fine, mylar-protected dust jacket. {BUND}. Bookseller Inventory # 021141

Title: WHAT WAS SHE THINKING?: Notes on a Scandal: ...

A lonely schoolteacher reveals more than she intends when she records the story of her best friend’s affair with a pupil in this sly, insightful novel

Schoolteacher Barbara Covett has led a solitary existence; aside from her cat, Portia, she has few friends and no intimates. When Sheba Hart joins St. George’s as the new art teacher, Barbara senses the possibility of a new friendship. It begins with lunches and continues with regular invitations to meals with Sheba’s seemingly close-knit family. But as Barbara and Sheba’s relationship develops, another does as well: Sheba has begun a passionate affair with an underage male student. When it comes to light and Sheba falls prey to the inevitable media circus, Barbara decides to write an account in her freind’s defense—an account that reveals not only Sheba’s secrets but her own.

What Was She Thinking? is a story of repression and passion, envy and complacence, friendship and loneliness. A complex psychological portrait framed as a wicked satire, it is by turns funny, poignant, and sinister. With it, Zoë Heller surpasses the promise of her critically acclaimed first novel, Everything You Know.

Zoë Heller was born in London. Her work as a feature writer, critic, and columnist has appeared in The Independent on Sunday, The London Sunday Times, The New Yorker, Vanity Fair, The London Review of Books, Esquire, The New Republic, and The Times Literary Supplement. She currently writes a weekly column for the London Telegraph, for which she won the 2002 British Press Award for Columnist of the Year. She has lived in New York since 1993.