Items related to THE WIDOW OF THE SOUTH (SIGNED) 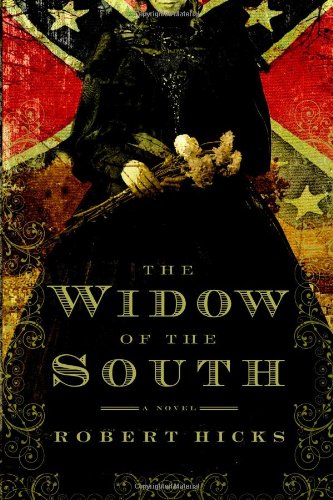 THE WIDOW OF THE SOUTH (SIGNED)

A 426 page debut novel set during the Civil War and based on a true story. SIGNED by the author on the title page. First edition, first printing. New and unread. Dust jacket is enclosed in a clear mylar cover. Book will be carefully packed and shipped in a box. Bookseller Inventory # 14750

Title: THE WIDOW OF THE SOUTH (SIGNED)

A story based on the true experiences of a Civil War heroine finds Carrie McGavock witnessing the bloodshed of the Battle of Franklin, falling in love with a wounded man with a hardscrabble past, and dedicating her home as a burial site for fallen soldiers. A first novel. 125,000 first printing.

In an Author's Note at the end of his book The Widow of the South, Robert Hicks tells us that "when Oscar Wilde made his infamous tour of America in 1882, he told his hosts that his itinerary should include a visit to 'sunny Tennessee to meet the Widow McGavock, the high priestess of the temple of dead boys.'" Carrie McGavock, The Widow of the South, did indeed take it upon herself to grieve the loss of so many young men in the battle of Franklin, Tennessee, which took place on November 30, 1864. Nine thousand men lost their lives that day. She and her husband John eventually re-buried on their own land 1,481 Confederate soldiers killed at Franklin, when the family that owned the land on which the original shallow graves had been dug decided to plow it under and put it into cultivation.

Before the battle begins, Carrie's house is commandeered for a field hospital and all normal life is suspended. Carrie is anything but normal, however. She has buried three children, has two living children she pays little attention to, has turned the running of the house over to her slave, Mariah, and spends her time dressed in black walking around in the dark or lying down lamenting her loss. She is a morbid figure from the outset but becomes less so as the novel progresses. The death going on all around her shakes her out of her torpor, but death is definitely her comfort zone.

One of the soldiers who is treated at the house is Zachariah Cashwell, who loses his leg when Carrie sends him to surgery rather than watch him die. They are inextricably bound in some kind of a spiritual dance from then on. Their reasons for being drawn to each other are inexplicable, apparently, because they remain unexplained, and when Cashwell tells Carrie he loves her, she beats him nearly to death because she loves him too. At least, that is the reason Hicks gives. He violates that first caveat given to all writers: "show us, don't tell us." There is doubtless something deeply flawed in Carrie and screamingly symbolic about her behavior; it is surely elusive. Too bad, because Carrie was a real person whom Hicks lauds for her compassion and ability to grieve without end. Then, he throws in this gratuitous "love story" and confuses the issue. Carrie's relationship with her husband and children remains unexamined. Hicks is better at describing death and "the stink of war" than he is at life. If you read War and Peace and loved all the war parts and were bored senseless by the peace parts, this is your cup of tea. --Valerie Ryan

Modern Fiction and Mystery. New and used. Many signed. For further information, please contact me at 805-582-0162.


Kathleen Simpson, 2992 Chippewa Avenue, Simi Valley, CA 93063. Telephone and
fax number 805-579-9656. E-mail is mkthpms@aol.com. Shipping and handling via
Media Mail. Priority mail available upon request. Shipping and handling is
quoted for heavy books and foreign orders. Full refund for books returned in
as-shipped condition within 10 days of shipping date, for any reason. Books can
be held for 10 days with E-mail or telephone request. Prices are subject to
change without notice until receipt o...