Items related to WRITING NEW ENGLAND: An Anthology from the Puritans...

Home Delbanco, Andrew {editor} WRITING NEW ENGLAND: An Anthology from the Puritans to the ...
Stock Image 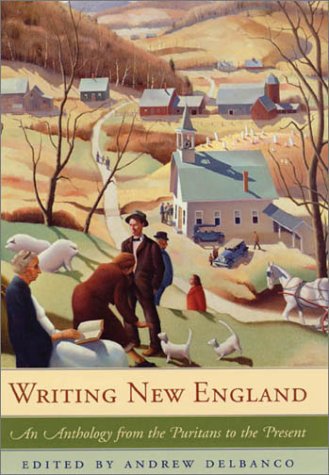 WRITING NEW ENGLAND: An Anthology from the Puritans to the Present

This anthology samples the definitive works of literature responsible for the worldwide reputation of New England as a region rich in literary accomplishments. The voices of Winthrop, Bradstreet, Emerson, Hawthorne, Dickinson, Thoreau, Frost, Stevens, Sexton, Updike, and many others intermingle in this thematically arranged chorus that includes poetry, memoir, fiction, Puritan sermons, court records from the Salem witch trials, and numerous other documents. As new, unread copy, in fine, mylar-protected dust jacket. Bookseller Inventory # 11597

Title: WRITING NEW ENGLAND: An Anthology from the ...

The story of New England writing begins some 400 years ago, when a group of English Puritans crossed the Atlantic believing that God had appointed them to bring light and truth to the New World. Over the centuries since, the people of New England have produced one of the great literary traditions of the world--an outpouring of poetry, fiction, history, memoirs, letters, and essays that records how the original dream of a godly commonwealth has been both sustained and transformed into a modern secular culture enriched by people of many backgrounds and convictions.

Writing New England, edited by the literary scholar and critic Andrew Delbanco, is the most comprehensive anthology of this tradition, offering a full range of thought and style. The major figures of New England literature--from John Winthrop and Anne Bradstreet to Emerson, Hawthorne, Dickinson, and Thoreau, to Robert Frost, Wallace Stevens, Robert Lowell, Anne Sexton, and John Updike--are of course represented, often with fresh and less familiar selections from their works. But Writing New England also samples a wide range of writings including Puritan sermons, court records from the Salem witch trials, Felix Frankfurter's account of the case of Sacco and Vanzetti, William Apess's eulogy for the Native American King Philip, pamphlets and poems of the Revolution and the Civil War, natural history, autobiographical writings of W. E. B. Du Bois and Malcolm X, Mary Antin's account of the immigrant experience, John F. Kennedy's broadcast address on civil rights, and A. Bartlett Giamatti's memoir of a Red Sox fan.

Organized thematically, this anthology provides a collective self-portrait of the New England mind. With an introductory essay on the origins of New England, a detailed chronology, and explanatory headnotes for each selection, the book is a welcoming introduction to a great American literary tradition and a treasury of vivid writing that defines what it has meant, over nearly four centuries, to be a New Englander.

From the Preface:
"Imposing one unitary meaning on New England would be as foolish as it would be unconvincing. Yet one purpose of this book is to convey some sense of New England's continuities and coherence...Not all the writers in this book are major figures (a few are barely known), but all are here because of the bracing freshness with which they describe places, people, ideas, and events to which, even if the subject is familiar, we are re-awakened."

Andrew Delbanco is the Mendelson Family Chair of American Studies and Julian Clarence Levi Professor in the Humanities at Columbia University.