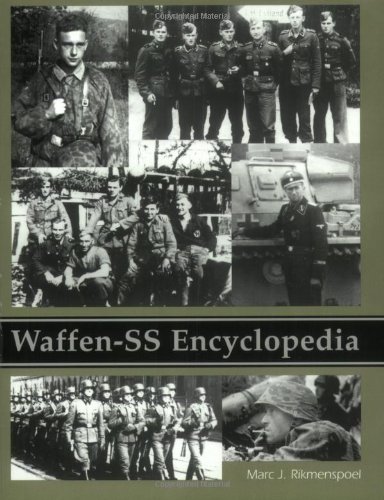 Synopsis: World War II spawned some of the most famous-and infamous-fighting organizations the world has ever known. None was more feared by its battlefield foes or more hated by political enemies of the National Socialist regime than the Waffen-SS. Six decades after the last Waffen-SS unit capitulated or was annihilated, the facts about many aspects of this organization are still shrouded in legend and half-truth. Loathed by many as a criminal organization, yet also respected for the esprit, resolve, and valor of its component units and individuals, the Waffen-SS was unarguably a highly-complex, multi-faceted phenomenon, unique among the military organizations of the world.

Marc Rikmenspoel has crafted the ultimate reference for those trying to understand the intensely controversial and complicated nature of the Waffen-SS. A comprehensive overview that will be useful to historians, buffs, wargamers, and re-enactors alike, no matter what your predisposition to the Waffen-SS, you will learn a great deal from this book. The book includes a concise history of every one of the major fighting formations of the Waffen-SS (those designated as "divisions").

About the Author: Marc Rikmenspoel was born on 26 July 1970 in Albany, New York to a Dutch father and an American mother. He graduated Phi Beta Kappa from Colorado State University in Fort Collins in 1992 with a B.A. in History and continues to reside in Fort Collins. This is his second book; the first, Soldiers of the Waffen-SS: Many Nations, One Motto, was published by J J. Fedorowicz in 1999. Since the first edition of Waffen-SS Encyclopedia, Rikmenspoel also co-authored For Rex and For Belgium: Leon Degrelle and Walloon Political and Military Collaboration, 1941-1945, published by Helion Books in 2004.

Book Description The Aberjona Press, 2004. Paperback. Condition: Good. Connecting readers with great books since 1972. Used books may not include companion materials, some shelf wear, may contain highlighting/notes, may not include cdrom or access codes. Customer service is our top priority!. Seller Inventory # S_280380352

Book Description The Aberjona Press, 2004. Condition: Good. A+ Customer service! Satisfaction Guaranteed! Book is in Used-Good condition. Pages and cover are clean and intact. Used items may not include supplementary materials such as CDs or access codes. May show signs of minor shelf wear and contain limited notes and highlighting. Seller Inventory # 0971765081-2-4

Book Description Brand: The Aberjona Press, 2004. Paperback. Condition: VERY GOOD. Pages are intact and are not marred by notes or highlighting, but may contain a neat previous owner name. The spine remains undamaged. Supplemental materials are not guaranteed with any used book purchases. Seller Inventory # 0971765081_abe_vg

Book Description Brand: The Aberjona Press, 2004. Paperback. Condition: GOOD. Has little wear to the cover and pages. Contains some markings such as highlighting and writing. Supplemental materials are not guaranteed with any used book purchases. Seller Inventory # 0971765081_abe_gd