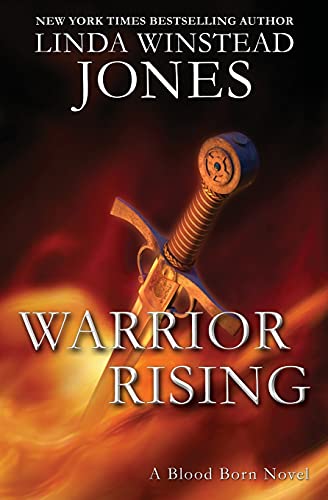 Synopsis: The first blood has spilled....   For centuries, humans had no idea of the world beyond their mortal knowledge. A world of vampires, witches, Immortal Warriors, and more. And now a vampire has plotted to become queen and put all humans under her dominion.   Sorin has been at the queen-to-be’s right hand for decades. He’s killed, plotted, and planned for his own rise to power. But when he’s ordered to kill a child, suddenly all of his humanity comes rushing back and he pledges allegiance to the rebel forces.   There an Immortal Warrior named Indikaiya watches him with distrust. She is drawn to this man with a dark soul and such a slight glimmer of honor that it’s nearly extinguished. She sees the strength of his will as he goes up against his former allies, the intensity he brings to each fight, and the passion he offers to her.   As the humans, vampires, and warriors brace for the final battle, it seems clear that not all may survive. And all will be changed. By blood... and by death....

About the Author: Linda's first book, the historical romance Guardian Angel, was released in 1994. In the years since she's written in several romance sub-genres under several names. In order of appearance, Linda Winstead; Linda Jones; Linda Winstead Jones; Linda Devlin; and Linda Fallon. She's a six time finalist for the RITA Award and a winner (for Shades of Midnight, writing as Linda Fallon) in the paranormal category. Most recently she's been involved in joint projects with Linda Howard, and has been rereleasing some of her backlist in ebook format. She can be found at www.facebook.com/LindaWinsteadJones, www.facebook.com/LindaHowardLindaJones, www.lindawinsteadjones.com, and on Twitter @LWJbooks.

Book Description Paperback. Condition: Used: Very Good. BC365This item is in VERY GOOD condition, all pages are intact. THIS ITEM DOES NOT INCLUDE ANY CD'S, INFO-TRACKS, ACCESS CARDS OR OTHER SUPPLEMENTARY MATERIAL ( IF APPLICABLE ). Ships same day or next business day. Please allow 2 to 7 days shipping from USA. Book may have signs of shelf wear and dusty. Brouhaha, Inc. is committed to provide each customer with the highest standard of customer service. F. Seller Inventory # 6K-MGCJ-3OB6

Book Description CreateSpace Independent Publishing Platform. Paperback. Condition: Very Good. A copy that has been read, but remains in excellent condition. Pages are intact and are not marred by notes or highlighting, but may contain a neat previous owner name. The spine remains undamaged. At ThriftBooks, our motto is: Read More, Spend Less. Seller Inventory # G1530137306I4N00

Book Description CreateSpace Independent Publishing Platform. Paperback. Condition: As New. An apparently unread copy in perfect condition. Dust cover is intact; pages are clean and are not marred by notes or folds of any kind. At ThriftBooks, our motto is: Read More, Spend Less. Seller Inventory # G1530137306I2N00