Items related to Washington's Immortals: The Untold Story of an... 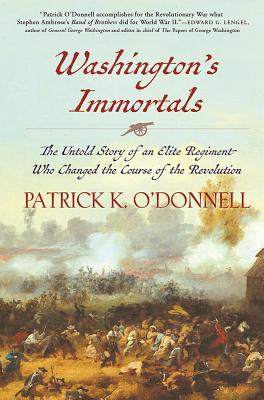 Washington's Immortals: The Untold Story of an Elite Regiment Who Changed the Course of the Revolution (Paperback or Softback)

Washington's Immortals: The Untold Story of an Elite Regiment Who Changed the Course of the Revolution. Seller Inventory # BBS-9780802126368

Synopsis:
In August 1776, little over a month after the Continental Congress had formally declared independence from Great Britain, General George Washington’s young army faced off against over 20,000 British and Hessian soldiers at the Battle of Brooklyn. This was the largest battle of the Revolution, and with the Americans outmanned and outmaneuvered, it was almost the end of the war, as well. But thanks to a series of desperate bayonet charges by a single heroic regiment from Maryland, known as the Immortal 400,” Washington was able to retreat and regroup. He evacuated his men to Manhattan, and the Continental Army lived to fight another day.

In Washington’s Immortals, bestselling military historian Patrick K. O’Donnell brings to life the forgotten story of these remarkable men. Known as gentlemen of honour, family, and fortune,” they fought not only in Brooklyn, but also in key battles throughout the war including Trenton, Stony Point, Camden, Cowpens, Guilford Courthouse, and Yorktown, where their valor and resilience changed the course of history.

Drawing on extensive unpublished original sources, including letters, diaries, and pension applications, O’Donnell weaves together the stories of these dauntless men their friendships, loves, defeats, and triumphs. He chronicles their development into an elite unit amid struggles with dogged British opponents and hostile Loyalists. And through the prism of this regiment, which included rich merchants, tradesmen, and free blacks, he tells the larger story of the Revolutionary War. Washington’s Immortals is gripping boots-on-the-ground history that will transport readers to the bloodiest battles and darkest days of the Revolutionary War in the company of men whose extraordinary sacrifices, endurance of unimaginable hardship, and valiant fighting helped make the difference between defeat and victory.
About the Author:
Patrick K. O’Donnell is a bestselling, critically acclaimed military historian and an expert on elite units. He is the author of ten books, including Beyond Valor, Dog Company, and First SEALs. He served as a combat historian in a Marine rifle platoon during the Battle of Fallujah and speaks often on espionage, special operations, and counterinsurgency. He has provided historical consulting for DreamWorks’ award-winning miniseries Band of Brothers and for documentaries produced by the BBC, the History Channel, Fox News, and Discovery.

Save up to 90% on your favorite items at BargainBookStores.com! Our 20,000 square foot warehouse in Grand Rapids, Michigan is filled with hundreds of thousands of books and consumer goods, all at the lowest prices! We've been serving internet customers with great deals since 2001. All books ship from Grand Rapids, Michigan. 100% Customer Satisfaction Guaranteed We want to ensure your satisfaction. If you are dissatisfied with your purchase or shopping experience, we would like to hear from you. Please contact us by email: cs@bargainbookstores.com. Please be sure to include your contact information and order number. We do not charge a restocking fee for returns. Your Privacy BargainBookStores.com does not provide, sell or market customer information to other businesses or organizations.