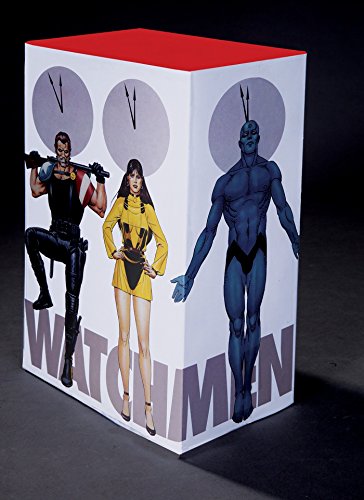 It all begins with the paranoid delusions of a half-insane hero called Rorschach. But is Rorschach really insane - or has he in fact uncovered a plot to murder super-heroes and, even worse, millions of innocent civilians? On the run from the law, Rorschach reunites with his former teammates in a desperate attempt to save the world and their lives. Num Pages: 1250 pages, illustrations. BIC Classification: FXS. Category: (G) General (US: Trade). Dimension: 202 x 322 x 115. Weight in Grams: 4264. . 2016. Slp. Hardcover. . . . . Books ship from the US and Ireland. Bookseller Inventory # V9781401270346

In a world where the mere presence of American superheroes changed history, the U.S. won the Vietnam War, Nixon is still president and the Cold War is in full effect. WATCHMEN begins as a murder mystery but soon unfolds into a planet-altering conspiracy. As the resolution comes to a head, the unlikely group of reunited heroes—Rorschach, Nite Owl, Silk Spectre, Dr. Manhattan and Ozymandias—must test the limits of their convictions and ask themselves where the true line is between good and evil. Collects #1-12.

From Alan Moore, the award-winning writer of V FOR VENDETTA and BATMAN: THE KILLING JOKE and Dave Gibbons, the artist of GREEN LANTERN, the WATCHMEN COLLECTOR’S EDITION is DC Comics’ first-ever slipcase collection featuring the entire 12 issue series reproduced as oversized, single-issue hardcovers and utilizes the high-quality, recolored pages found in WATCHMEN: THE ABSOLUTE EDITION

Alan Moore is perhaps the most acclaimed writer in the graphic story medium, having garnered countless awards for works such as WATCHMEN, V FOR VENDETTA, From Hell, Miracleman and SWAMP THING. He is also the mastermind behind the America's Best Comics line, through which he has created (along with many talented illustrators) THE LEAGUE OF EXTRAORDINARY GENTLEMEN, PROMETHEA, TOM STRONG, TOMORROW STORIES and TOP 10. As one of the medium's most important innovators since the early 1980s, Moore has influenced an entire generation of comics creators, and his work continues to inspire an ever-growing audience. Moore resides in central England.