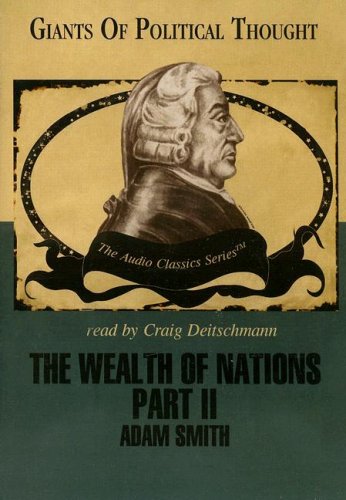 Synopsis: [*This is PART 2 of a 2-part Audiobook CD Library Edition]

The 'Giants of Political Thought' series is an easy and entertaining way to broaden your mind and your awareness of great ideas. --- This program discusses Smith's general approach to philosophy and how The Wealth of Nations fits into that approach. It then goes on to cover Smith's major themes in this lengthy and complex book. Smith's sometimes difficult discourse is presented with the background information necessary for its comprehension.

An Inquiry into the Nature and Causes of the Wealth of Nations is the foundation of classical economics, and it has influenced a broad range of thinkers. In it, Adam Smith stresses the importance of the division of labor to economic progress. He criticizes the arguments for economic planning and offers a detailed theoretical and historical case for free trade. Far more than just a work on economic theory, The Wealth of Nations also contains Smith's views on philosophy, history, and political theory.

About the Author: ADAM SMITH (1723-1790) was born in a small village in Kirkcaldy, Scotland. He entered the University of Glasgow at age fourteen and later attended Balliol College at Oxford. After lecturing for a period, he held several teaching positions at the University of Glasgow. His greatest achievement was writing The Wealth of Nations, a five-book series that sought to reveal the true causes of prosperity and which established him as the father of contemporary economic thought.

1. The Wealth of Nations Part II

Book Description Blackstone Audiobooks 2006-05-01, 2006. Audio CD. Condition: Very Good. Item is in very good condition. If supplemental codes/CDs for textbooks are required please contact us prior to purchasing as they may be missing. Seller Inventory # DS-0786169850-2

4. The Wealth of Nations: Library Edition