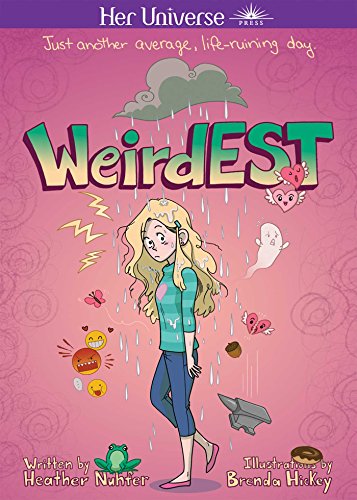 Veronica McGowan is a typical, unremarkable, average thirteen-year-old. And this is the bane of her existence. Desperate to be an “Est”—cutest, smartest, funniest—Veronica bumbles her way through 8th grade, never truly being herself for fear of rejection. Being a teenager is hard enough without the whole demoralizing world of Pearce Middle School knowing how you really feel. And nothing could be worse than everyone discovering how lame you really are. Or so she thinks....

One night, Veronica plots a way to become cool, wishing something—anything—about her would change, making her an “Est.” The next morning, Veronica wakes up for another woeful day of teenage anonymity, only to make a mortifying discovery—her strongest emotions physically manifest themselves in weird ways!

She belches fire when she’s angry, dark clouds soak her with rain when she’s sad, and she grows a protective turtle shell when she’s frightened. But worst of all, whenever she daydreams about her biggest crush, Veronica is bombarded by giggly, cutesy, floating hearts! Yep. That’s worse than being lame. For once, Veronica longs to be a wallflower. But Veronica’s emotions are on a roller-coaster ride, and her powers are running haywire.

It looks like Veronica has finally become an “Est.” But who would ever want to be—the weirdest?!

About the Author: Heather Nuhfer is the author of multiple graphic novels including Monster High, Scooby Doo, and Wonder Woman. She is also a writer on the internationally best-selling My Little Pony: Friendship is Magic comic books and graphic novels. Heather lives, writes, and knits in Seattle, WA with her fiancée Paul Morrissey and puppychild Einstein.

Book Description Her Universe Press, 2016. Condition: Good. Former Library book. Shows some signs of wear, and may have some markings on the inside. Seller Inventory # GRP115041102

Book Description Her Universe Press. Condition: Good. A copy that has been read, but remains in clean condition. All pages are intact, and the cover is intact (including dust cover, if applicable). The spine may show signs of wear. Pages can include limited notes and highlighting, and the copy can include "From the library of" labels or limited small stickers. Book may have a remainder mark or be a price cutter. Seller Inventory # CU-04-08-01-0199

Book Description Her Universe Press, 2016. Condition: Good. Hickey, Brenda (illustrator). A+ Customer service! Satisfaction Guaranteed! Book is in Used-Good condition. Pages and cover are clean and intact. Used items may not include supplementary materials such as CDs or access codes. May show signs of minor shelf wear and contain limited notes and highlighting. Seller Inventory # 1682610411-2-4

Book Description Her Universe Press, 2016. Paperback. Condition: VERY GOOD. Pages are intact and are not marred by notes or highlighting, but may contain a neat previous owner name. The spine remains undamaged. Seller Inventory # 1682610411_abe_vg

Book Description Condition: Acceptable. May have some shelf-wear due to normal use. Seller Inventory # 0KVKX6000YP3

Book Description Her Universe Press, 2016. Paperback. Condition: Good. Connecting readers with great books since 1972. Used books may not include companion materials, some shelf wear, may contain highlighting/notes, may not include cdrom or access codes. Customer service is our top priority!. Seller Inventory # S_277972215