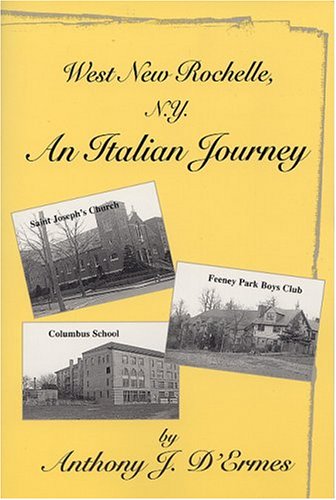 Synopsis: With exacting recall and precise detail, Anthony D'Ermes paints exciting pictures of his childhood as a first generation American born to immigrants from Southern Italy. Told with humor and compassion, he portrays their hopes and dreams alongside their everyday struggles to learn a new language, new customs, and their frequent painful experiences with housing, jobs, and government regulations. The story is told from the viewpoint of the D'Ermes family, but it is easily an "everyman" story of typical immigrant families of the period.

With rich detail, D'Ermes illustrates how the first generation children-American schooled and street smart-frequently helped their parents by reading and interpreting official documents, acting as translators with city and school officials, and helping them avoid immigrant scams and rip-offs.

The book details the primary institutions used by the Italian community to acclimate to this new culture and society, focusing on the Catholic Church, the New Rochelle School System and the Feeney Park Boys Club and Library.

Many Italian immigrants brought with them superstitious customs from the peasant countryside that can only be described as the "occult." Mr. D'Ermes describes the application of these occult practices to treat all manner of illnesses and ailments. Although quaint today, D'Ermes describes the prevalent fear of curses that others might inflict on your family and the application of chants, incantations, potions and charms that warded them off.

Of course no book of this kind would be complete without a full discussion of the foods and recipes that were used in his house and in many Italian homes, including Christmas and Easter feasts when special "religious" foods were prepared.

Mr. D'Ermes concludes with the values he learned in West New Rochelle and in the Boys Club that have served him well for the past 60 years as a business and corporate executive.

You don't have to be Italian to thoroughly enjoy this delicious slice of New York history from the viewpoint of a boy growing up in West New Rochelle during the 30's, 40's and 50s.

About the Author: Anthony J. D'Ermes was born on September 5, 1934, at Grasslands Hospital in the town of Mount Pleasant, Valhalla, New York He went to public schools in New Rochelle, N.Y. including Columbus Elementary, Issac E. Young Junior High School and New Rochelle High School, from which he graduated in 1953. In September 1953 he entered Bowling Green State University, Bowling Green, Ohio. He received a Bachelor of Arts degree in 1957 and a Bachelor of Science in Education degree in 1959. Mr. D'Ermes career includes working in Labor Relations at Ford Motor Company, Xerox, The National Housing Partnership and American Security Bank (now Bank of America) where he was Executive Vice President. Mr. D'Ermes has been profiled in Who's Who in the East, and Who's Who in Finance and Industry. He resides in Falls Church, Virginia. He and his wife, Jacqueline have three sons and five grandchildren.