Home Les Gold For What It's Worth: Business Wisdom from a Pawnbroker 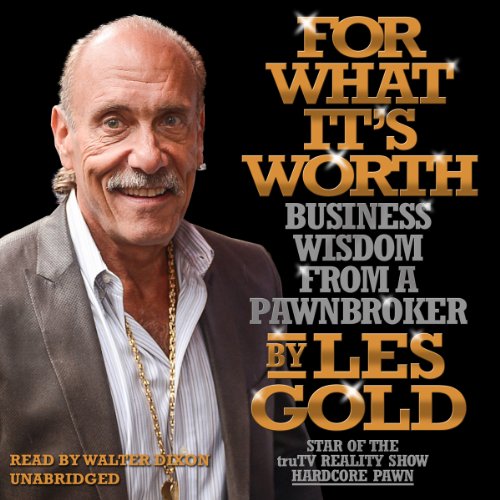 For What It's Worth: Business Wisdom from a Pawnbroker

The star of the reality television show Hardcore Pawn shares his street-smart, hard-bargaining business skills. -- No place in the world prepares you better for the working world than a pawnshop, and Les Gold takes you inside his shop to share what he's learned from fifty-five years in the most interesting job in the world. -- Businesses these days talk a lot about figuring out what the customer wants. Well, here's your first lesson: the customer doesn't know what he wants. This book will show you how to convince him he wants what you're selling. -- Les Gold has been in business since age twelve, when he started selling used golf clubs from his dad's basement. Now he owns Detroit's biggest pawnshop, American Jewelry and Loan, and is the star of the hit reality television show Hardcore Pawn. -- As a third-generation pawnbroker, Gold grew up in the business, dealing with customers who could be unruly and violent as often as they were friendly. He became good at selling just about anything and at buying items for what they were worth. Although he started at his family's small pawnshop, he has now expanded into a fifty-thousand-square-foot former bowling alley, making a thousand deals a day. -- On any given day, he could be taking a vintage car into pawn or chasing down a thief who's just stolen a gold chain from the store. No business school in the world can teach you as much about buying, selling, negotiating, managing employees, dealing with customers, advertising, tracking trends, and predicting the economy's ups and downs.

In this entertaining, honest book, Gold takes you inside some of his weirdest, wackiest deals and steals. From the monkey his dad once took in to pawn to the deal Gold made for a stripper pole, he has no boundaries for what he considers to be part of his business -- and neither should you. -- You will learn:

* How to tell an emotional story when you're selling -- and take emotion out of the transaction when you're buying;
* Why judging your customers before you know them can kill a potential deal;
* How to deal with risk, both mental and physical;
* How to communicate with employees (even if they're your own kids);
* Why investing in relationships with your community is time well spent;
* Why your business should never be limited by what others tell you it should be.

About the Author: Les Gold owns the fifty-thousand-square-foot American Jewelry and Loan, which serves more than 250 customers every hour. He also stars in the truTV show Hardcore Pawn, which has more than three million weekly viewers. He lives in Detroit and works alongside his wife, son, and daughter.

2. For What It's Worth: Business Wisdom from a Pawnbroker