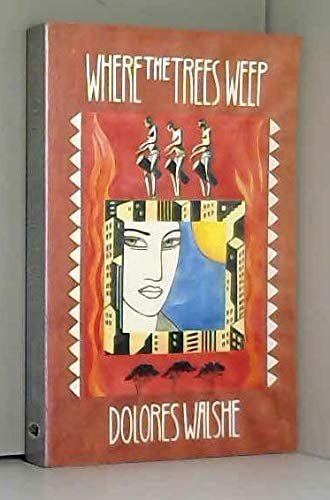 Where the Trees Weep

Synopsis: A man. A woman. An affair. A quest that pitches journalist Emma Harford headlong into the turbulence of South Africa, forcing her to look deeply into her own heart. What unfolds is a story of loves gained and lost, of lives saved while others are brutally crushed.
Faced with grim poverty hovering on the very threshold of white privilege and power, Emma struggles to hold a mirror up to apartheid, finding as she does that her own reflection is what she must first change.

From Publishers Weekly: Running through the metaphorical foliage of this first novel by Irish poet Walshe is an anguished story of poverty, police terror and a divided family in South Africa. The tale is driven by the quest of Emma Harford, a British journalist, for redemption in the anti-apartheid struggle. Emma, a full-fledged masochist, is tormented for having terminated a pregnancy by a "colored" activist, Thulatu, who attacks her with the venom of a right-to-life fanatic. "You're a murderer, a cold-blooded whore," he rages. An American priest, Dick Carruther, who gives Emma lodging in a squatters' shantytown outside Johannesburg, comes to appreciate her convoluted crusades. They make love after he is beaten by a white security force, but Emma finds no solace: "Tearing the child out by its roots had emptied her. Her body was a womb where no tree grew." By the novel's end, after a slew of killings, a suicide, mass demonstrations, overwrought rhetoric and the violent deaths of both of her lovers, Emma gives birth to Dick's child in London, with Thulatu's wealthy white mother presiding. "Now push, child!" the old woman says. And Emma, an excruciatingly good girl, complies.
Copyright 1993 Reed Business Information, Inc.

1. Where the Trees Weep

2. Where the Trees Weep

3. Where the Trees Weep

4. Where the Trees Weep

5. Where the Trees Weep

6. Where the Trees Weep

7. Where the Trees Weep

Book Description Paperback. Condition: Very Good. The book has been read, but is in excellent condition. Pages are intact and not marred by notes or highlighting. The spine remains undamaged. Seller Inventory # GOR006699388

8. Where the Trees Weep