Items related to Wife 22: A Novel 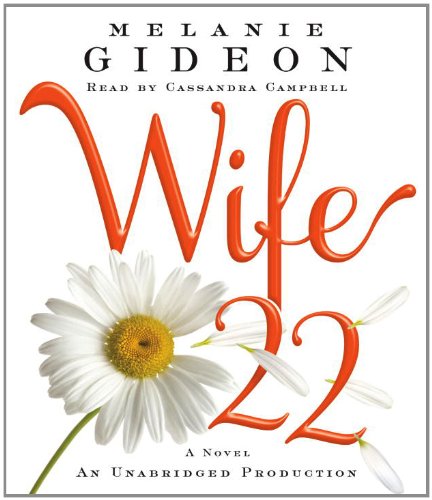 For fans of Helen Fielding’s Bridget Jones’s Diary and Allison Pearson’s I Don’t Know How She Does It comes an irresistible novel of a woman losing herself . . . and finding herself again . . . in the middle of her life.

But when the anonymous online study called “Marriage in the 21st Century” showed up in my inbox, I had no idea how profoundly it would change my life. It wasn’t long before I was assigned both a pseudonym (Wife 22) and a caseworker (Researcher 101).

And, just like that, I found myself answering questions.

7. Sometimes I tell him he’s snoring when he’s not snoring so he’ll sleep in the guest room and I can have the bed all to myself.
61. Chet Baker on the tape player. He was cutting peppers for the salad. I looked at those hands and thought, I am going to have this man’s children.
67. To not want what you don’t have. What you can’t have. What you shouldn’t have.
32. That if we weren’t careful, it was possible to forget one another.

Before the study, my life was an endless blur of school lunches and doctor’s appointments, family dinners, budgets, and trying to discern the fastest-moving line at the grocery store. I was Alice Buckle: spouse of William and mother to Zoe and Peter, drama teacher and Facebook chatter, downloader of memories and Googler of solutions.

But these days, I’m also Wife 22. And somehow, my anonymous correspondence with Researcher 101 has taken an unexpectedly personal turn. Soon, I’ll have to make a decision—one that will affect my family, my marriage, my whole life. But at the moment, I’m too busy answering questions.

As it turns out, confession can be a very powerful aphrodisiac.
From the Hardcover edition.

Q: Your previous work was your critically acclaimed memoir. What inspired you to turn to fiction, and where did the idea for Wife 22 originate?

A: I was sitting in a bar with a friend. We were well into our second glass of wine, when, in researcher mode, I started asking her questions about her marriage. After she invoked a zone of confidentiality I was amazed at how forthright she was willing to be about everything: love, sex, aging, security, happiness, and parenting. That's when I knew I was on to something. What if an ordinary wife and mother had the opportunity (and most importantly, the anonymity) to admit what she really thought, felt, wished for and dreamed, regretted and longed for in her life and marriage? Thus Wife 22 was born.

Q: Who do you think will connect with this novel, and why? Who is Wife 22?

A: I believe there's a little bit of Wife 22 in all of us, no matter what age, no matter what stage of a relationship you're in: married, single or, "it's complicated!" It's so easy to get stuck in a routine and so hard to get yourself out of it. I think we all yearn to be woken up.

Q: Do you see any similarities between yourself and your heroine, Alice Buckle? Any differences?

A: Well, like Alice, I am about to celebrate my 20th wedding anniversary with my husband. Unlike Alice, however, I did not receive an email soliciting me to participate in an anonymous online survey on marital satisfaction. And if I did, I would immediately dump it into my trash folder, because I know, after writing this book, how seductive and dangerous the act of confession can be. There are little bits of me in Alice, sure, but Alice is definitely her own person. Also she's nicer than me. And much more fluent with social media.

Q: You pay homage to Joseph Heller and Catch 22 with the title and with a few circumstances Alice faces during the course of your novel. Can you shed a little light on how that came to be and what it signifies?

A: I think marriage is a sort of Catch 22. It's strange how some of the little quirks and eccentricities of your mate that you found so charming in the beginning--that may have even contributed to you falling in love with them--20 years later are the things that drive you absolutely crazy.

Q: Many of the novel's characters, especially Alice, engage in social media like Facebook and Twitter. How do you think these methods of communication have changed our lives and the relationships we have with others? How have they changed yours?

A: I resisted Facebook and Twitter for a long time, and I confess I still find it challenging to post, tweet or blog. I get incredible stage fright trying to think of something clever to say. People will see it--or worse--ignore it. What if nobody "likes" it? What if nobody comments? It's like middle school every day! Part of what I wanted to explore in Wife 22 was whether social media brought us closer together or pushed us farther apart. I think it does both. I long for the old days when my husband and son and I would watch a TV show together. I mean really watch it, without our attention constantly flickering to the device on our laps. Watching TV in my household is not a passive act. We're always talking back to the TV, commenting, laughing: that's ridiculous, who told her she could sing? On the other hand I learn things about my husband every day through Facebook. New things. What he's thinking, what he's reading, what he's doing. Facebook allows us to be strangers to one another, to be voyeurs, but in a safe way. There's something about that distance that's titillating.

Q: You've said, "Confession is a powerful aphrodisiac." Can you elaborate?

A: Anonymous confession? The chance to tell the absolute truth to a stranger? A stranger who doesn't judge, who listens intently, who asks all the right questions? That's very sexy.