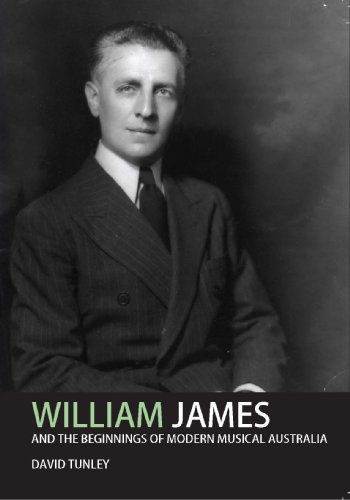 William James and the beginnings of modern musical Australia

Synopsis: In his younger years William James was recognised in Australia and overseas as a well-known pianist, with regular appearances at the Proms under Sir Henry Wood and as a touring artist in the famous 1920s series of International Celebrity Concerts in the UK. At the same time he was admired as a gifted songwriter for his works such as The Sun-God and Six Australian Bush Songs. However, his real and lasting legacy came about after his return to Australia and stepping into the unknown waters of broadcasting. Little did he realise that, with the establishment of the Australian Broadcasting Commission, he (together with the General Manager Charles Moses and the Music Advisor Bernard Heinze) would be at the helm of an organisation which would transform Australian musical life. This biography is intended as a study of James s contribution to the development of Australian musical life following his remarkable triumphs overseas.

About the Author: DAVID TUNLEY is well-known internationally for his scholarly writings on a range of musical subjects. An Emeritus Professor of Music at the University of Western Australia, he is a Chevalier in the Napoleonic Order Palmes Académiques, a Member of the Order of Australia and a Fellow of the Australian Academy of the Humanities.

1. William James and the Beginnings of Modern Musical Australia

2. William James and the beginnings of modern musical Australia

3. William James and the Beginnings of Modern Music in Australia

Book Description Australian Music Centre, 2007. Softcover. Condition: Very Good. Dust Jacket Condition: No Dust Jacket. First Edition. Size: Octavo (standard book size). 134 pages. Text body is clean, and free from previous owner annotation, underlining and highlighting. Binding is tight, covers and spine fully intact. No foxing in this copy. Previous owner's signature in ink. All edges clean, neat and free of foxing. Quantity Available: 1. Shipped Weight: Under 1 kilogram. Category: Music; Australia; ISBN: . ISBN/EAN: 9780909168629. Pictures of this item not already displayed here available upon request. Inventory No: 30632. For further info on this title, click on the "Ask Bookseller a Question" button directly underneath this listing. We will reply within 24 hours. Otherwise you can order right now (inclusive of shipping options) from the "Add to Basket" button to the right. Seller Inventory # 30632

4. William James and the beginnings of modern musical Australia