Items related to William of Malmesbury: Gesta Pontificum Anglorum, The... 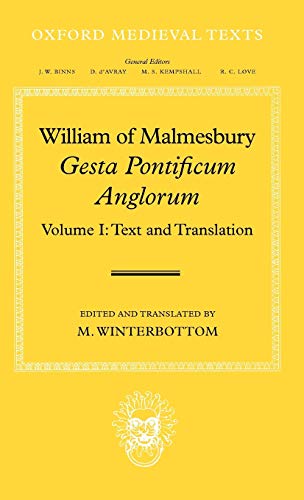 Gesta Pontificum Anglorum (The History of the English Bishops) is a modern edition of one of the most important medieval texts written c. 1125 by one of England's key historians of the period, William, Monk of Malmesbury. It is a vivid narrative on the English Church, its bishoprics and monasteries, from c. 600 to William's contemporary era, and the edition features the original Latin text of the manuscript with the English translation alongside. Conceived as a companion piece to his Gesta Regum Anglorum, this historical work was a unique enterprise, and the result is a substantial book, elegantly written, full of original information, and characterized by intelligent interpretation and judgement. The first four books of the text, treat each diocese in turn, and the fifth book is devoted to the history of William's own monastery. A second volume by R. M. Thomson will contain an introduction and detailed commentary on the work.

Michael Winterbottom taught Classics in London and Oxford until his retirement in 2001. He was elected to the British Academy in 1978. Rodney Thomson has taught medieval history at the University of Tasmania since 1975. He has been a Fellow of the Australian Academy of Humanities since 1992, and for the last 20 years has collaborated with Michael Winterbottom in editing the historical works of William of Malmesbury.