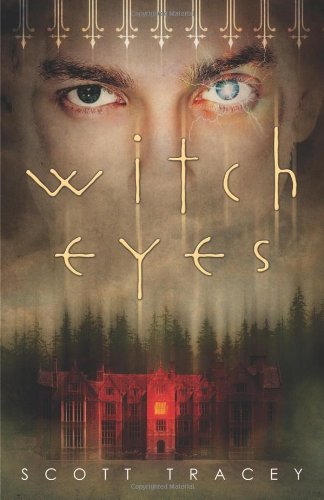 Synopsis: A boy who can see the world's secrets and unravel spells with just a glance.

Braden's witch eyes give him an enormous power. A mere look causes a kaleidoscopic explosion of emotions, memories, darkness, and magic. But this rare gift is also his biggest curse.

Compelled to learn about his shadowed past and the family he never knew, Braden is drawn to the city of Belle Dam, where he is soon caught between two feuding witch dynasties. Sworn rivals Catherine Lansing and Jason Thorpe will use anything--lies, manipulation, illusion, and even murder--to seize control of Braden's powers. To stop an ancient evil from destroying the town, Braden must master his gift, even through the shocking discovery that Jason is his father. While his feelings for an enigmatic boy named Trey grow deeper, Braden realizes a terrible truth: Trey is Catherine Lansing's son . . . and Braden may be destined to kill him.

Scott Tracey aspired to be a writer from a young age. His debut novel, Witch Eyes, was named to the 2012 Popular Paperbacks for Young Readers list in the forbidden romance category and ranked among the top ten gay and lesbian Kindle books of 2011 at Amazon.com. Tracey lives near Cleveland, Ohio.

Book Description Condition: Good. EX LIBRARY BOOK - with the usual stamps, stickers and labels. The item shows wear from consistent use, but it remains in good condition and works perfectly. All pages and cover are intact (including the dust cover, if applicable). Spine may show signs of wear. Pages may include limited notes and highlighting. May NOT include discs, access code or other supplemental materials. Seller Inventory # 31UE34004E7Q_ns

Book Description Condition: Acceptable. Cover has some rubbing and edge wear. Access codes, CDs, and other accessories may not be included. All items ship Mon-Fri. Seller Inventory # 2Y6JCI0010E1

Book Description North Star Editions. Paperback. Condition: Fair. A readable copy. All pages are intact, and the cover is intact. Pages can include considerable notes-in pen or highlighter-but the notes cannot obscure the text. An ex-library book and may have standard library stamps and/or stickers. At ThriftBooks, our motto is: Read More, Spend Less. Seller Inventory # G0738725951I5N10

Book Description North Star Editions. Paperback. Condition: Good. A copy that has been read, but remains in clean condition. All pages are intact, and the cover is intact. The spine may show signs of wear. Pages can include limited notes and highlighting, and the copy can include previous owner inscriptions. An ex-library book and may have standard library stamps and/or stickers. At ThriftBooks, our motto is: Read More, Spend Less. Seller Inventory # G0738725951I3N10

Book Description Flux, 2011. Condition: Good. Original. Ships from Reno, NV. Former Library book. Shows some signs of wear, and may have some markings on the inside. Seller Inventory # GRP94674387

Book Description Flux, 2011. Condition: Good. Original. Former Library book. Shows some signs of wear, and may have some markings on the inside. Seller Inventory # GRP64431458

Book Description Flux. Condition: Acceptable. Former Library book. Paperback The item is fairly worn but still readable. Signs of wear include aesthetic issues such as scratches, worn covers, damaged binding. The item may have identifying markings on it or show other signs of previous use. May have page creases, creased spine, bent cover or markings inside. Packed with care, shipped promptly. Seller Inventory # L-06-1440

Book Description Flux, 2011. Condition: Good. Original. Shows some signs of wear, and may have some markings on the inside. Seller Inventory # GRP70840733