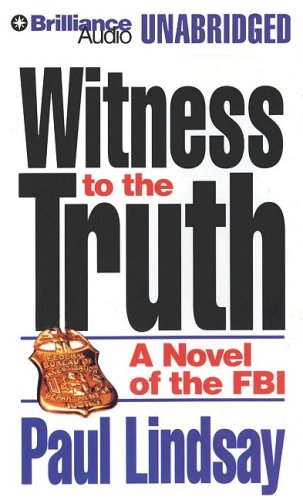 Witness to the Truth

Synopsis: An FBI agent nabs an armed-and-dangerous drug dealer single-handedly. His reward: an angry reprimand for neglecting to call in for backup. Welcome to today's FBI, where crime fighting takes a backseat to brown-nosing and backbiting -unless you happen to be Special Agent Mike Devlin. A streetwise veteran of Detroit's downtown war zone, Devlin plays to win - and he plays by his own rules. Which is why he's now assigned to the Bureau's version of Siberia, midnight wiretap duty. But you can't keep a good man down for long, and when Devlin gets wind of a Mafia mole inside the FBI, he springs into action. Recruiting a squad of fellow FBI renegades, he sets out to stop the leak while staying one step ahead of the suits back at the office. Here is a novel that only an FBI agent could have written: an authentic tour through Detroit's criminal underworld, and a stinging swipe at the Bureau's bureaucratic follies.

From the Inside Flap: agent Paul Lindsay received commendation and a $600 incentive award from FBI director William Sessions for helping spearhead the capture of serial killer Benjamin Atkins. After writing this novel, Paul Lindsay -- a twenty-year veteran of the FBI -- became the victim of a vicious backlash. The Bureau threatened to fire Lindsay for insubordination, claiming he violated a company ban on accepting outside income. Was that the case? Or did Lindsay expose too much about an agency that likes to remain in the shadows?

Special Agent Mike Devlin is an exception to the FBI rule book. But when one too many unorthodox arrests gets him wiretap duty, Devlin gets an explosive earful: a traitor in the ranks is selling out the FBI's informants to the Mob. Yet closer to home, a fellow agent's daughter has been kidnapped, and a serial killer is the prime suspect. Now Devlin must put his career and his life in the cross-hairs of the Mafia and a maniac. But he wouldn't have it any other way.

1. Witness to the Truth: A Novel of the FBI