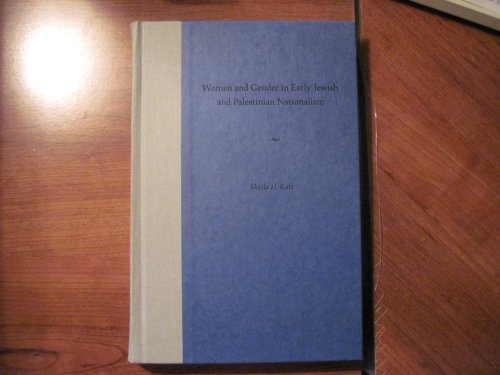 Women and Gender in Early Jewish and Palestinian Nationalism

Title: Women and Gender in Early Jewish and ...

"In this landmark book, Katz skillfully demonstrates the complex ways that gender ideology was inextricably linked to and reinforced the formation of both Palestinian Arab and Jewish Zionist national identities in the first half of the 20th century."--Sherna Berger Gluck, California State University

"This is the only historical study in which the discourse of both Arabs and Jews is the centerpiece and that discourse is analyzed as undergirding the construction of nascent ideologies. . . . The text is a marvelous synthesis of the many conflicting narratives about Palestine in the years leading up to Israeli statehood."--Lisa Pollard, University of North Carolina, Wilmington

"This book makes a significant contribution to Middle Eastern and women's history scholarship. It is unique to find the cases of these two nationalist movements treated simultaneously in this way, in this period. It is an intriguing interweaving of the gendered narratives."--Palmira Brummett, University of Tennessee

Drawing on a variety of source materials, ranging from popular print media to poetry, film, political treatises, and biographies and autobiographies, Sheila Katz examines the ways in which gender operated in forming the political identities of Palestinian Arabs and Jewish Zionists. By exploring both gender definitions and their expressions in the everyday lives of two contesting peoples, she provides a highly nuanced understanding of how gender affects the discourse of conflict between two competing national movements.  Through this balanced discussion of the histories of Jewish and Palestinian women during Palestine's formative years, Katz makes a significant contribution to scholarship in Middle Eastern and women's history.

Working at the intersection of several disciplines, Katz provides a wide-ranging examination of the formation and expression of national identity and the changing gender roles that help shape it. She uses gender as a tool to examine the creation of boundaries and power relations among nations. Through a discussion employing the materials and methods of history, sociology, literary criticism, and anthropology, this study offers a unique examination of identity formation in Palestine during the first half of the 20th century and an analysis of both Palestinian and Jewish women in their respective national movements, illuminating gender as a linchpin of international conflict.

Sheila Katz is associate professor at the Berkelee College of Music.

Sheila H. Katz is an associate professor at the Berklee College of Music in Boston, where she teaches history of the Middle East, gender and power, and world civilizations.