Items related to The Woods Were Full of Men 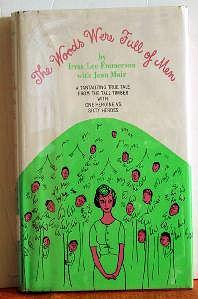 The Woods Were Full of Men

The pinkish cloth covers look very good except for some ink marks bottom edge of the book. Slight lean forward. The dust jacket looks great, no edge tears, mylar coverd, not price clipped. The Dust Jacket has been attached to the book Contents of the book: The only thing worse than a woman who can cook and won't is one who can't cook and will. Irma Lee Emmerson could cook and she was willing because when a girl is over thirty with no job and no man in her life, something has to be done. Irma Lee did it. She took a job as a second cook in a logging camp, in the deep Oregon woods, and found herself the only woman among sixty virile loggers, a situation that will do wonders for any girl. Right away she discovered she was little and fragile and absolutely unique in a man's world. Her shocked family in San Francisco seemed to think she had left the world behind her. But Irma Lee found out that the logging camp was a world in itself. In a few months she met more drama than she had in all her years of big city life. There were fights, tragedies, laughter, romance, a bit of ribaldry, nature cutting up rought, and an awful moment when she had to defend her life with a fry pan. During these months, while she frantically fried hot cakes for her sixty ravenous loggers, bound up their physical wounds, and tried to ease their emotional ones, Irma Lee learned a good deal about life and men, about Old Fox, Meatball, Moonshine Jake, and Powderbox Pete. She made acquaintance of a professional gambler who took the camp for the payroll; of little Gina, a girl with a past, who was willing to brave the bears and the cougars, to get her man; of Swivelneck, who early turned into the perfect murder victim; of Wild Bill Moran, the best damn cat skinner in the state, and of the two shapely sisters who camp up to help in the cookhouse and almost caused a riot. There is an old saying that Heaven sends us food, but the devil sends us cooks, a remark that never could be appplied to Irma Lee. Bookseller Inventory # 002815

Title: The Woods Were Full of Men

Hello My name is Janet Stratton (Jan's Collectables)and I have been a bookseller for over 10 years. My store is an internet store, because my store is small you get the best service, quick and fast, very well packed and shipped. No hassles, if you are not happy a full refund and I pay for the return shipping. Any questions, answered the same day or next. I have 3,700 books mostly , children's books, art, architecture, biographies, classics, signed,unique, rare, a nice variety. I deal mostly in older books. I hope you will browse my store and find something of interest Sincerely, Janet

I accept payment Credit cards(via Abebooks), cashier's check, money order,
and Pay Pal. I prefer not to receive personal checks. Books will be held
for 10 days pending receipt of payment. If you are not satisfied with your
purchase for any reason, with prior notification and if the book is returned in
the same condition as originally sent, you will receive a full refund including
shipping.


Orders usually ship within 2 business days. Shipping costs are based on books
weighing 2.2 LB, or 1 KG. If your book order is heavy or oversized, we may contact
you to let you know extra shipping is required.