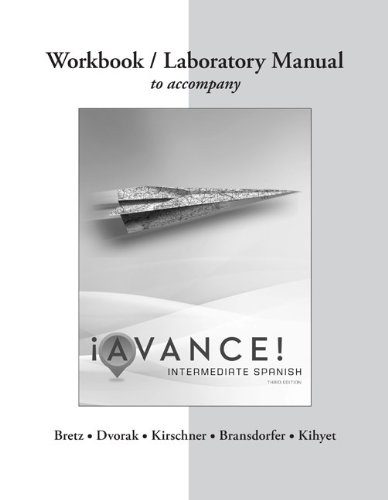 Synopsis: Cuaderno de práctica: this supplement presents vocabulary and grammar from the Student Edition but is organized a bit differently (audio and written sections). The WBLM also features a native-speaker interview section (Voces), pronunciation and spelling practice, and a guided composition activity.

About the Author: Constance Moneer Kihyet is Professor of Spanish at Saddleback College in Mission Viejo, California, where she currently teaches a wide range of courses in Spanish language and Latin American civilization, culture, and literature. She received her Ph.D. in Spanish from the Florida State University in 1979, specializing in Golden Age literature. Her interests and publications include studies of Golden Age and nineteenth-century Spanish literature, as well as aspects of second language acquisition, teaching methodology, and literary translation. In accordance with her interest in Golden Age literature, she recently completed the translation of the Adventures of Espandian (1587) for the historical text The Chronicles of California's Queen Calafia (2007). She has written test bank materials for the Pasajes: Lengua program and is co-author of the test bank of Puntos de partida, An Invitation to Spanish. Professor Kihyet is also co-author of El mundo hispano, An Introductory Cultural and Literary Reader, Con destino a la comunicación, Avance: Intermediate Spanish, First and Second Editions, as well as Pasajes: Literatura, Fifth, Sixth, and Seventh Edition.

Mary Lee Bretz is Professor Emerita of Spanish and former Chair of the Department of Spanish and Portuguese at Rutgers University. Professor Bretz received her Ph.D. in Spanish from the University of Maryland. She has published numerous books and articles on nineteenth- and twentieth-century Spanish literature and on the application of contemporary literary theory to the study and teaching of Hispanic literature.

Rodney Bransdorfer received his Ph.D. in Spanish Linguistics and Second Language Acquisition from the University of Illinois at Urbana-Champaign. He has taught at Purdue University, the University of Illinois at Chicago, and Gustavus Adolphus College. He is currently Professor of Spanish at Central Washington University. He has presented papers at national conferences such as AATSP and AAAL. In addition to his work on the Pasajes series, he has authored or co-authored several other McGraw-Hill titles including: ¡Avance!, Second Edition (2008), ¿Qué te parece?, Third Edition (2005), the instructor's annotations for Nuevos Destinos: Spanish in Review (1998), and the instructor's annotations for Destinos: Alternate Edition (1997).

Trisha Dvorak is Senior Program Manager with Educational Outreach at the University of Washington. She has coordinated elementary language programs in Spanish and taught courses in Spanish language and foreign language methodology. Professor Dvorak received her Ph.D. in Applied Linguistics from the University of Texas at Austin. She has published books and articles on aspects of foreign language learning and teaching and is co-author of Composición: Proceso y síntesis, a writing text for third year college students.

Carl Kirschner is Professor of Spanish and Dean of Rutgers College. Formerly Chair of the Department of Spanish and Portuguese at Rutgers, he has taught courses in linguistics (syntax and semantics), sociolinguistics and bilingualism, and second language acquisition. Professor Kirschner received his Ph.D. in Spanish Linguistics from the University of Massachusetts. He has published a book on Spanish semantics and numerous articles on Spanish syntax, semantics, and bilingualism, and edited a volume on Romance linguistics.

Book Description McGraw-Hill Education, 2013. Condition: Good. A+ Customer service! Satisfaction Guaranteed! Book is in Used-Good condition. Pages and cover are clean and intact. Used items may not include supplementary materials such as CDs or access codes. May show signs of minor shelf wear and contain limited notes and highlighting. Seller Inventory # 0077412788-2-4