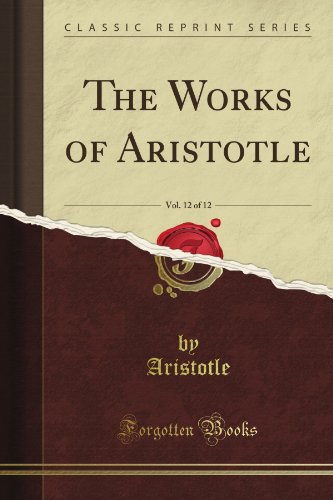 Synopsis: Prof. A. E. Taylor that a translation of some of the fragments of Aristotle slost works would be a useful addition to theO xford Translation of the extant works. I then thought that I had enough on my hands without this addition. In the interval, however, interest in the fragments has been quickened by the pioneer work of such scholars asP rof. Jaeger, Prof. Bignone, and Prof. Wilpert, and many passages not included in Rose seditions of the fragments have been recognized as being derived from Aristotle slost works. A translation of the whole of the fragments included by Rose would not be of much general interest, and I have thought it best to limit this selection to three of the sections in his editions the dialogues, the logical works, and the philosophical works. The references in the notes to this trans lation are to the page and line of Rose sT eubner edition. At the same time I have included many other passages which have been with probability assigned to Aristotle by the scholars named above and others. I must in particular express my indebtedness toD r. R. Walzer, who has not only published a useful edition of some of the fragments, but has called my attention to others which would otherwise have escaped my notice, and has lent me some useful books and articles. It is not intended to make any further addition to theO xford Translation of A ristotle. W. D. R.
(Typographical errors above are due to OCR software and don't occur in the book.)

Forgotten Books' Classic Reprint Series utilizes the latest technology to regenerate facsimiles of historically important writings. Careful attention has been made to accurately preserve the original format of each page whilst digitally enhancing the aged text.