Items related to The Writings of Robert Motherwell (Documents of Twentieth-Ce... 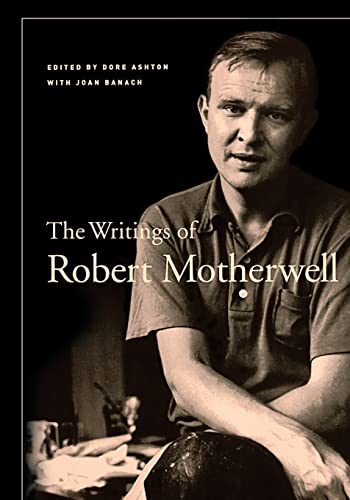 The Writings of Robert Motherwell (Documents of Twentieth-Century Art)

Robert Motherwell (1915-1991), one of the leading American Abstract Expressionist painters, was also a theorist and exponent of the movement. His writing articulated the intent of the New York school ―Jackson Pollock, Willem de Kooning, Adolph Gottlieb, Franz Kline, Arshile Gorky, and others―during a period when their work was often reviled for its departure from traditional representation. As founder of the Documents of Modern Art series (later renamed the Documents of Twentieth-Century Art), Motherwell gave modern artists a voice at a time when very few people understood their theories or work. This authoritative new edition of the artist's writings about art includes public lectures, essays, and interviews. Impeccably edited, with an informative introductory essay and rigorous annotation, it is illustrated with black-and-white images that elucidate Motherwell's writings.

"Robert Motherwell was not just a great painter, he was a brilliant thinker. As the founding editor of The Documents of Twentieth-Century of Art, he decisively shaped our understanding of modernism. This new and expanded selection of Motherwell's criticism provides an essential guide to the art of the high modern period, both American and European."―Pepe Karmel, author of Picasso and the Invention of Cubism

"In the past two decades Abstract Expressionism has become one of the most dynamic subjects in art history; sometimes the reading is so dense it is like swimming through peanut butter. But, cutting through to the essential questions that generated the movement, the writings of Robert Motherwell are a treasure. Written at the same time he was painting, Motherwell's texts make me feel like a witness to the philosophical curiosity that generated one of the most powerful art movements of the twentieth century."―Michael Auping, author of Abstract Expressionism: The Critical Developments

“This book is essential reading for anyone thinking about the uneasy clash of modernism and postmodernism in postwar America; Motherwell’s writing played a decisive role and this volume is an admirably full account of it.”―Jonathan Fineberg, author of When We Were Young: New Perspectives on the Art of the Child