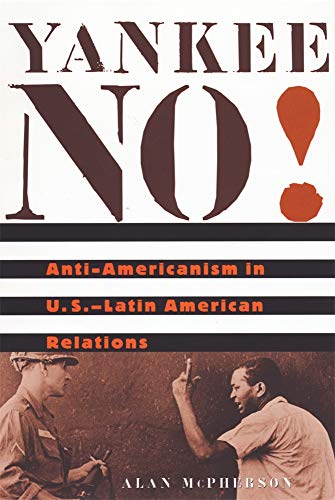 In 1958, angry Venezuelans attacked Vice President Richard Nixon in Caracas, opening a turbulent decade in Latin American-U.S. relations. In Yankee No! Alan McPherson sheds much-needed light on the controversial and pressing problem of anti-U.S. sentiment in the world.

Examining the roots of anti-Americanism in Latin America, McPherson focuses on three major crises: the Cuban Revolution, the 1964 Panama riots, and U.S. intervention in the Dominican Republic. Deftly combining cultural and political analysis, he demonstrates the shifting and complex nature of anti-Americanism in each country and the love-hate ambivalence of most Latin Americans toward the United States. When rising panic over "Yankee hating" led Washington to try to contain foreign hostility, the government displayed a surprisingly coherent and consistent response, maintaining an ideological self-confidence that has outlasted a Latin American diplomacy torn between resentment and admiration of the United States.

However, McPherson warns, U.S. leaders run a great risk if they continue to ignore the deeper causes of anti-Americanism. Written with dramatic flair, Yankee No! is a timely, compelling, and carefully researched contribution to international history.

About the Author: Alan L. McPherson is Associate Professor of Internatioal and Area Studies, University of Oklahoma.

Book Description Harvard University Press, 2003. Condition: Good. Shows some signs of wear, and may have some markings on the inside. Seller Inventory # GRP76854730

Book Description Harvard University Press, 2003. Hardcover. Condition: GOOD. Has little wear to the cover and pages. Contains some markings such as highlighting and writing. Supplemental materials are not guaranteed with any used book purchases. Seller Inventory # 0674011848_abe_gd

Book Description Harvard University Press, 2003. Hardcover. Condition: VERY GOOD. Pages are intact and are not marred by notes or highlighting, but may contain a neat previous owner name. The spine remains undamaged. Supplemental materials are not guaranteed with any used book purchases. Seller Inventory # 0674011848_abe_vg

Book Description Harvard University Press, 2003. Condition: Good. A+ Customer service! Satisfaction Guaranteed! Book is in Used-Good condition. Pages and cover are clean and intact. Used items may not include supplementary materials such as CDs or access codes. May show signs of minor shelf wear and contain limited notes and highlighting. Seller Inventory # 0674011848-2-4