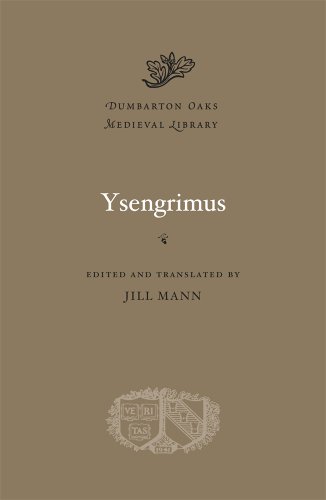 The twelfth-century Latin beast epic Ysengrimus is one of the great comic masterpieces of the Middle Ages. It recounts the persecution of the wolf Ysengrimus - who represents a hybrid abbot-bishop - by his archenemy Reynard the fox. The narrative's details are carefully crafted to make the wolf's punishment fit the abbot-bishop's crime. Series: Dumbarton Oaks Medieval Library. Num Pages: 576 pages. BIC Classification: 2ADL; DCF; DSBB. Category: (G) General (US: Trade). Dimension: 140 x 202 x 33. Weight in Grams: 690. . 2013. Hardcover. . . . . Books ship from the US and Ireland. Bookseller Inventory # V9780674724822

The twelfth-century Latin beast epic Ysengrimus is one of the great comic masterpieces of the Middle Ages. This long poem, composed in what is today Belgium, recounts the relentless persecution of the wolf Ysengrimus by his archenemy Reynard the fox, in the course of which the wolf is beaten to a pulp, flayed (twice), mutilated, and finally eaten alive by sixty-six pigs. The cartoon-like violence of the narrative is not motivated by a gratuitous delight in cruelty but by a specific satiric aim: the wolf represents the hybrid ecclesiastic who is both abbot and bishop, whose greed is comparable to the wolf's. The details of the narrative are carefully crafted to make the wolf's punishment fit the abbot-bishop's crime, creating a topsy-turvy world in which the predator becomes prey. In the elaborate rhetorical fantasies that accompany the narrative, the wolf's tortures are represented as honors (for example, his flaying is mockingly represented as an episcopal consecration). This poem gave rise to a whole body of narratives, beginning with the earliest branches of the Romance of Renard and extending into most of the European vernaculars, so influential that the name Renard eventually became the standard word for fox in French.

Jill Mann is a Fellow of the British Academy, an Honorary Fellow of St. Anne’s College, Oxford, and a Life Fellow of Girton College, Cambridge.