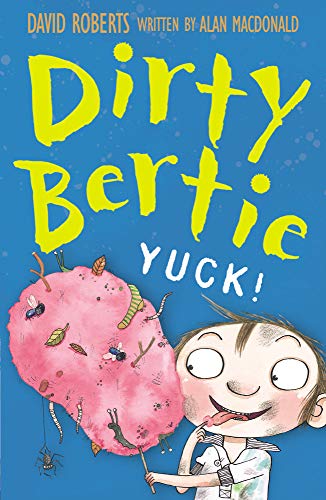 Synopsis: Meet Dirty Bertie, a boy with nose-pickingly disgusting habits. He's full to bursting with madcap plans and crazy ideas, and if it's trouble you're after, look no further - Bertie's sure to be up to his neck in it.

About the Author: David Roberts worked as a fashion illustrator in Hong Kong before becoming one of the UK's foremost children's illustrators. He has worked with writers including Philip Ardagh, Georgia Byng and former Children's Laureate Julia Donaldson. David won a Gold Award in the Nestle Children's Book Prize for Mouse Noses On Toast in 2006, and was shortlisted for the CILIP Kate Greenaway Medal for The Dunderheads in 2010 and Tinder in 2015. Alan MacDonald dreamed of becoming a professional footballer, but when he won a pen in a writing competition his fate was sealed. Alan has written over eighty children's books, which have been translated into many languages and won several awards. Alan also writes for TV.

Book Description Stripes Publishing, 2008. Paperback. Condition: Used; Like New. Dispatched, from the UK, within 48 hours of ordering. This book is in mint condition. Both the pages and the cover are completely intact, without zero sign of previous usage. Seller Inventory # CHL3956417

Book Description Stripes Publishing, 2008. Paperback. Condition: Used; Good. Dispatched, from the UK, within 48 hours of ordering. This book is in good condition but will show signs of previous ownership. Please expect some creasing to the spine and/or minor damage to the cover. Seller Inventory # CHL1107616

Book Description Stripes Publishing 2008-04-01, 2008. Paperback. Condition: Very Good. All books are pre-owned and will have been read by someone else before you. They may well show signs of minor wear and tear. Please note, cover images are illustrative only, and the actual book cover and edition can vary. Seller Inventory # 9781847150394-21

Book Description Stripes Publishing, 2008. Paperback. Condition: Very Good. Very Good condition with no significant faults. Clearly used but very few minor defects. Will look good on your book case after reading but may not be suitable as a present unless hard to find elsewhere MOST IMAGES ARE STOCK PHOTOS. IF YOU NEED A PARTICULAR EDITION PLEASE SEND US A MESSAGE BEFORE PURCHASING SO THAT WE CAN CHECK THAT THE ONE ON OFFER IS THE ONE YOU REQUIRE. SECURE DAILY POSTING FROM UK. 30 DAY GUARANTEE. Seller Inventory # mon0002543621

Book Description Stripes Publishing, an imprint o, 2008. Paperback. Condition: Very Good. All orders are dispatched the following working day from our UK warehouse. Established in 2004, we have over 500,000 books in stock. No quibble refund if not completely satisfied. Seller Inventory # mon0001251034

There are 50 more copies of this book