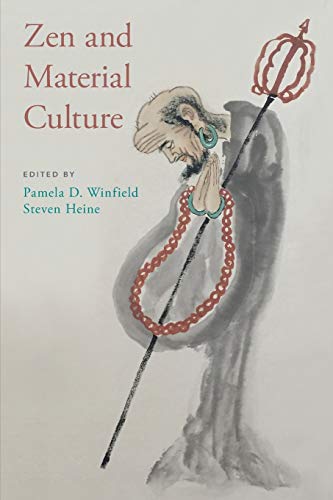 The stereotype of Zen Buddhism as a minimalistic or even immaterial meditative tradition persists in the Euro-American cultural imagination. This volume calls attention to the vast range of "stuff" in Zen by highlighting the material abundance and iconic range of the Soto, Rinzai, and Obaku sects in Japan. Chapters on beads, bowls, buildings, staffs, statues, rags, robes, and even retail commodities in America all shed new light on overlooked items of lay and monastic practice in both historical and contemporary perspectives. Nine authors from the cognate fields of art history, religious studies, and the history of material culture analyze these "Zen matters" in all four senses of the phrase: the interdisciplinary study of Zen's matters (objects and images) ultimately speaks to larger Zen matters (ideas, ideals) that matter (in the predicate sense) to both male and female practitioners, often because such matters (economic considerations) help to ensure the cultural and institutional survival of the tradition.
Zen and Material Culture expands the study of Japanese Zen Buddhism to include material inquiry as an important complement to mainly textual, institutional, or ritual studies. It also broadens the traditional purview of art history by incorporating the visual culture of everyday Zen objects and images into the canon of recognized masterpieces by elite artists. Finally, the volume extends Japanese material and visual cultural studies into new research territory by taking up Zen's rich trove of materia liturgica and supplementing the largely secular approach to studying Japanese popular culture. This groundbreaking volume will be a resource for anyone whose interests lie at the intersection of Zen art, architecture, history, ritual, tea ceremony, women's studies, and the fine line between Buddhist materiality and materialism.

Pamela D. Winfield is Associate Professor of Religious Studies at Elon University, NC. She specializes in Japanese Buddhist art and doctrine in the esoteric and Zen traditions. Her previous book Icons and Iconoclasm in Japanese Buddhism: Kukai and Dogen on the Art of Enlightenment (Oxford University Press, 2013) won the annual Book Prize from the Association of Asian Studies Southeast Conference in 2015.

Steven Heine is Professor of Religious Studies and History, and Director of the Asian Studies Program at Florida International University in Miami, FL. A 2007 recipient of the Order of the Rising Sun Award from the Japanese government, Heine is the author of more than two dozen books and one hundred articles and book chapters on East Asian religions, especially the role of Zen in China and Japan and the relation between religiosity and society.