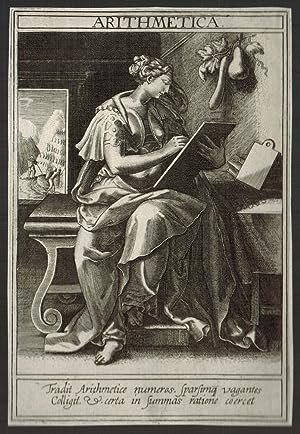 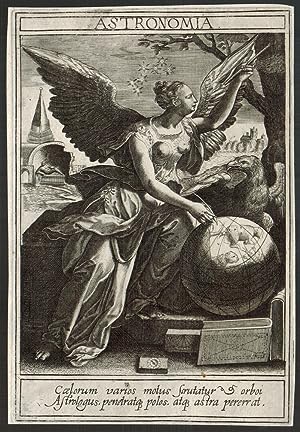 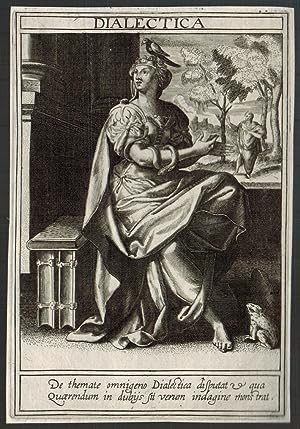 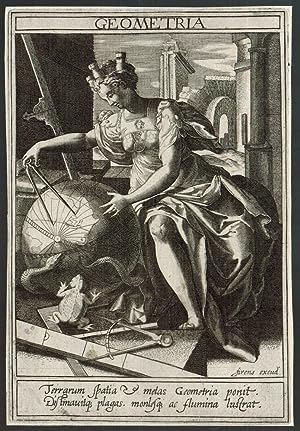 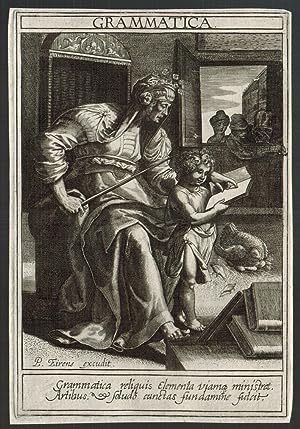 Like Thomas de Leu, Fierens left Antwerp for Paris in the early 17th century but maintained ties with his native city, bringing with him the Jesuit visual culture so dominant in Antwerp and lending it to the print culture of other religious orders (#3 below) as well as to secular subjects. Approximately half of the plates in the present collection show Fierens' collaboration with his better-known countryman Martin de Vos. - Fierens is a strangely shadowy figure in most standard reference works perhaps due to his migration from Antwerp circa 1604. We know that he was received at the Guild of St. Luke in Antwerp in 1597 and that he associated there with Rubens' Franco-Flemish agent Melchior Tavernier. Thieme-Becker also notes that Fierens became naturalized as a French citizen in 1607 and eventually went on to become 'Graveur du Roi'. Fierens is so poorly documented (a mere half-column in Old Hollstein) in the standard repertories and collections that with few exceptions there is no bibliographical control over which prints of his were issued in suites, and which were issued separately. On the basis of format we believe that they are not book illustrations, but we have erred on the conservative side in assigning prints to complete suites, possibly incomplete suites, and separately-issued prints. It is hoped that future research will catalog the oeuvre of this engraver in more detail. - The present prints are offered as loose sheets, having been removed by us from the later backing sheets on which they were mounted, as found in eg the British Museum. They are generally in fine, dark impression, maintaining original margins. Two plates have minor faults, described below. - SACRED SUBJECTS: - 1. THE TEN COMMANDMENTS. "Decem Praecepta". Paris: chez Pierre Firens, [ca. 1610]. 10 consecutively numbered plates with title and imprint on Plate 1. Each with motto under engraved vignette. 192 x 135 mm, on sheets aprox. 215 x 155 mm. Not in H, Th-B, B, IFF, BMC. - 2. THE EIGHT BEATITUDES. "Octo Beatitudines". Paris: chez Pierre Firens, [ca. 1610]. 8 consecutively numbered plates, with general title on Plate 1 as well as imprint. Each with motto under engraved vignette. 188 x 131 mm, on sheets aprox. 189 x 132 mm. Closed repair to plate 1. Not in H, Th-B, B, IFF. Present in BMC. - In the Eight Beatitudes and Ten Commandments, we see exemplary scenes from the Old and New Testaments to illustrate the precepts delivered in the Sermon on the Mount and on the tablets presented to Moses. In the Tenth Commandment, for example, (against coveting thy neighbor's house) shows 1 Kings 21, in which Ahab and Jezebel have their neighbor murdered in order to take over the vineyard which he would not sell to them. The Third Beatitude ("Blessed are the meek.") depicts Mary Magdalene washing Christ's feet with her tears in order that her sins be forgiven. - 3. After MARTIN DE VOS. ST. FRANCIS AND HIS COMPANIONS. "Non Nobis Domine Non Nobis, sed Nomini Tuo da Gloriam" (Psalm 113). Paris, Avec privilege du Roy, 1608. Title (?) and 9 plates illustrating St. Francis and his early companions, including the five Franciscan protomartyrs. Each with Biblical quotation under engraved vignette. Various sizes between 150 x 93 mm and 157 x 117 mm on sheets between 152 x 105 mm and 165 x 124 mm. Title signed "Petrus Firens excud.", plates signed "M. de Vos figu.", most additionally dated "Anno 1608". Not in H (under de Vos), Th-B, B, or IFF. Not in BMC. - Set of 10 plates chronicling the early days of the followers of St. Francis. The title plate (?) features two Franciscans kneeling in prayer before a heavenly apparition of the Instruments of the Passion arranged into the shape of the letters 'IHS'. The 9 further plates, engraved by Fierens after the designs of de Vos, depict kneeling Franciscans adoring the Virgin Mary; St. Francis receiving the stigmata; St. Francis kneeling before Christ in Heaven while his disciples are blessed by Angels below; St. Francis receiving the Word of God directly; the Companions of St. Francis gathered around his deathbed; St. Bernard the Protomartyr contemplating Christ on the Cross while bearing the instruments of his own crucifixion; and an unidentified Franciscan on a cross, being subjected to the fantasies of both Heaven and Hell. - 4. After MARTIN DE VOS. JONAS AND THE WHALE. [Paris, ca. 1610?]. 5 [of 6] numbered engravings. 178 x 119 mm on sheets aprox. 184 x 124 mm. Plate 1 signed "Martin de Vos inventor", "Petrus Firens excudit". Not in H, B, or IFF, BMC. Th-B 12, p. 7. - Charming set of very fine engravings illustrating the story of Jonas and the Whale, after the designs of de Vos (through untraced under that name in Hollstein). - 5. ARMS OF THE SAVIOUR. "Arma Redemptoris Christi Iesu". [Paris, ca. 1610?]. Signed "firens ex.". 196 x 139 mm, on sheet 225 x 163 mm. With motto beneath engraved image. - An extremely clever conceit featuring the Instruments of the Passion arranged into a 'coat of arms' for Christ. Similar in concept to the Instruments of the Passion conceit found in the title plate to #3. Apparently a standalone print; we have compared a suite of armorials attributed to Fierens (Armes & blasons des chevaliers de l'Ordre du Sainct Esprit, 1623) but that is of a much smaller format (160 x 105 mm) and design. This print in particular shows the combination of piety and wit one associates with the Antwerp Jesuits. - PROFANE SUBJECTS: - 6. THE SEVEN LIBERAL ARTS. 7 plates, 3 signed "Firens excud.". [Paris, ca. 1610?]. 162 x 110 mm on thick sheets aprox. 165 x 112 mm. With motto under each engraved vignette. Not in H, Th-B, B, IFF, BMC. - A perennially popular subject for Flemish engravers, consisting of 7 women symbolizing Astronomy, Dialectic, Grammar, Rhetoric, Arithmetic, Geometry, and Music. - 7. After MARTIN DE VOS. TWELVE SIGNS OF THE ZODIAC. "Duodecim Signa Zodiaci". Paris: Avec Privilege du Roy, 1608. Title and 12 numbered prints. Not in Th-B, B, BMC. Hollstein 46, #1428-144. Seller Inventory # 53556

Title: Collection of 61 prints by the Flemish ...

We have been dealing in valuable books, manuscripts, and autographs since 1883. As members of the International League of Antiquarian Booksellers (ILAB), the Verband der Antiquare Österreichs (Austrian association of antiquarian booksellers), as well as the Verband deutscher Antiquare e.V. (German association of antiquarian booksellers), we are bound by these organizations' code of ethics. A large proportion of our customers is made up of institutions, including renowned international universities and major state libraries. We keep contact with our private customers at international book fairs and through our online catalogues. You are welcome to visit us on our business premises from Monday to Friday, 10 AM to 6 PM. We are happy to take buying orders for the important book auctions in Germany and Austria, which we attend regularly. We dedicate special attention to the estates and archives of important personalities of the arts and sciences in European and world history. Through specially prepared archive catalogues we have been able to sell the archives of Viktor Léon (librettist, 1859-1940), Leo Fall (operetta composer, 1873-1925), Lotte Lehmann (singer, 1888-1976), Otto Tressler (actor, 1871-1865) and Max Reinhardt (director, 1873-1743), as well as the last privately owned important original manuscripts by Ludwig Wittgenstein (philosopher, 1889-1951). Along the lines of this specialization our buying policy concentrates especially on these fields.


All offers are subject to sale and alteration without prior notice. All orders are processed in the strict order of their entry.
Unless described otherwise, the books are complete and in good condition. All material is adequately described and guaranteed genuine. Any item can be returned within two weeks of receipt without any obligation to the customer if unrepresented defects or bibliographic inaccuracies are found. We guarantee the authenticity of all autographs without time limit to the orig...