Skip to main content
Home Art, Prints & Posters Beyond Rosie: Where Are the Strong Women in Posters?
SHARE

The high point in the depiction of strong, powerful women in posters almost certainly remains J. Howard Miller's 'We Can Do It' poster from 1942. Today, you know that image as Rosie the Riveter. It appears on mugs, calendars, journals, t-shirts, lunchboxes, postcards and Internet memes as an instantly recognizable symbol of feminism.

However, the 'We Can Do It' poster was used only by the Westinghouse Company as an internal motivational tool for a short time during World War II. The image was rediscovered in the 1980s and became a rallying call for recent generations of women.

Most of us are unaware that the term "Rosie the Riveter" was first used in 1942 in a hit song of the same name written by Redd Evans and John Jacob Loeb. A famous Norman Rockwell cover for the May 29, 1943 issue of Saturday Evening Post also helped develop the Rosie character. Although Miller's design was created more than 70 years ago, it remains the most famous piece of poster imagery where a woman is portrayed as a source of strength and economic power. No other poster comes close.

How can this be? Women have and do lead countries, companies and institutions. Sadly, most women in posters are shown as anything but strong. The most common ways to display women are as beautiful, stylish, sexual and subordinate to men. Smoldering looks, luscious lips, long legs, exposed shoulders, small waists, and cleavage are commonplace.

Hollywood is by far the biggest offender. Females in cinema posters often appear behind male figures who seem to be protecting them, women appear helpless and in distress, and they appear in the arms of men, or even underneath amorous men. It is rare for a single female figure to dominate a poster unless that person is a major Hollywood star like Raquel Welch, who played highly sexualized roles in the 1960s and 1970s.

Thankfully, poster art is not just about the movies. France's Belle Epoque era (1871-1914) was important for art and posters. Toulouse-Lautrec's much-loved posters depict women as stylish and fashionable, but the Moulin Rouge's high-kicking brand sexuality was still the order of the day.

World War I saw a drastic change in poster imagery concerning women, especially in France where sword-wielding, flag-waving figures rallied troops and civilians. These heroic female figures date back to the French Revolution. In the US, illustrator Howard Chandler Christy became known for producing patriotic "Christy Girl" posters for the US Navy and Marine Corps. "Gee!! I Wish I Were a Man, I'd Join the Navy," is one of his most famous works.

The Jazz Age and the advent of the so-called 'Golden Age of Travel' saw women depicted as slim, stylish things but still secondary to males. To railway firms, cruise lines and fledgling airlines, it was men who controlled the purse strings and who figured prominently in their advertising.

World War II again saw the reintroduction of women as the main characters in poster art, which recruited them into factories, farming, and other key roles usually occupied by men. This apparent sea-change was not about balancing genders but a matter of necessity. Also female figures nearly always retained their femininity in posters from this era – even Rosie the Riveter wore lipstick.

In the book Beyond Rosie the Riveter: Women of World War II in American Popular Graphic Art, Donna B Knaff writes WWII first empowered women to take on new responsibilities and freedoms, and then disempowered them when the men returned home and life went back to normal. At this time, “normal" meant women were expected to bring up children and manage the home. There was also discomfort in many areas of male society over the shift in the role of women.

"Rosie the Riveter, representing all wartime women, had pried open the bars of acceptable behavior for women," says Knaff, who argues that these wartime images of women still have significance today but "that significance may be far different from the image-makers' original intentions."

The commercial images of the 1950s and 1960s reflected the growth of consumerism, and that the woman's primary role was still considered to be running the home. It must have been an immensely frustrating time for women who had succeeded in new roles during the war. The women's liberation movement of the 1970s saw eye-catching posters developed by underground movements that were more strident in tone, but again mainstream posters still showed women in secondary positions and lacking power.

So surely posters began to feature strong women in the 1980s? Not exactly, two of the most powerful female characters in 1980s films were Ripley (Alien and Aliens) and Sarah Connor (Terminator films), and neither were shown on their respective movie poster. Jump ahead to 2013 and Sandra Bullock starred as an immensely resourceful female astronaut battling for her life in space and yet the poster for Gravity features a gender-neutral figure floating in space. Is Hollywood scared to show women of power in posters? It seem to be the case.

It's striking that an image from 1942 remains the most important aspect in how women are portrayed in this major art form. We examined more than 2,500 vintage posters listed for sale on the AbeBooks marketplace and discovered just a handful of examples, shown below, where women are depicted as people of strength, power or as leaders. 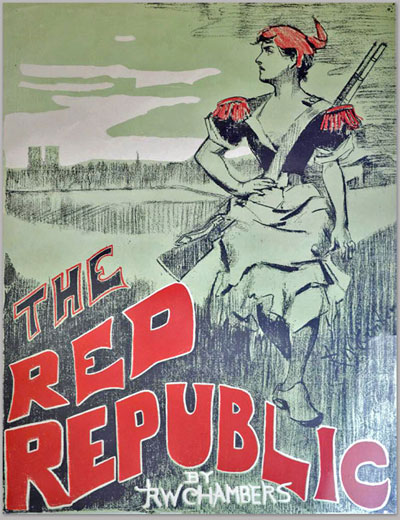 This 1885 poster, featuring an armed woman, promotes a novel called The Red Republic by RW Chambers. It's a historical romance set in the Paris Commune during the Revolution. $950 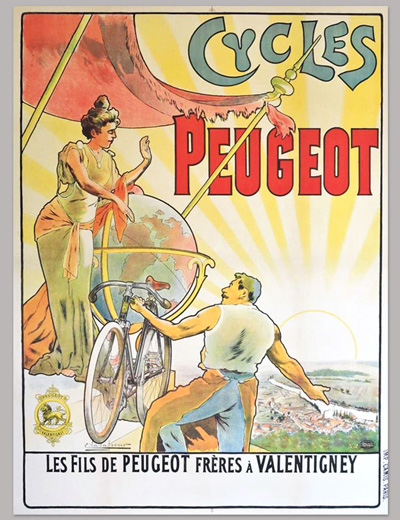 This 1898 French advertising poster for Peugeot is interesting because, although the man appears to have manufactured the bicycle, he is offering it to a woman as a way to discover the world. $2,220 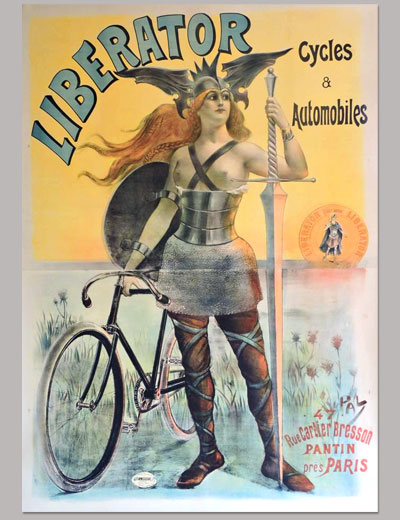 Norse mythology and the Valkyries seem to be the inspiration for this Liberator bicycles advertising poster from 1899. $2,835 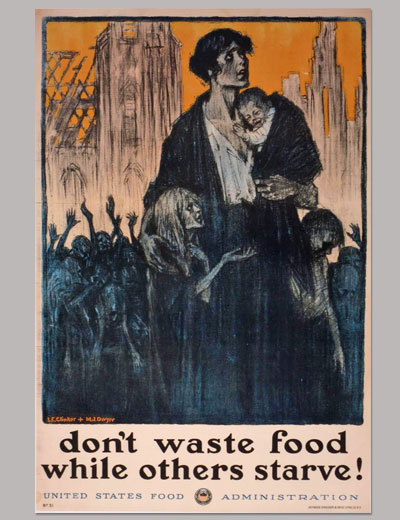 Don't Waste Food While Others Starve

This 1918 poster is exceptional in that the woman is the dominant figure and clearly a person of strength. The somber design, featuring skeletal children, was also unusual and harsh for the era. $437

This 1918 poster appeals to Americans to buy war stamps which helped fund the war effort in Europe. Joan of Arc may have worn armor and beaten the English in the 15th century, but the artist couldn't resist applying lipstick and Hollywood good looks. $500 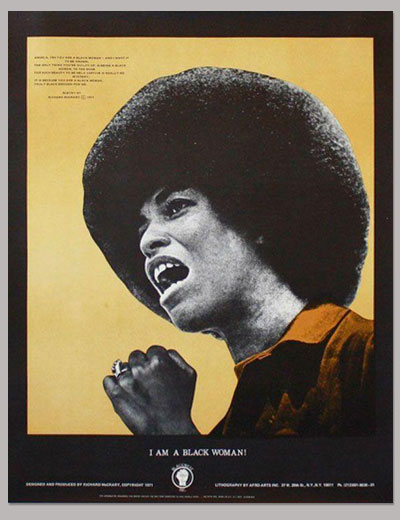 I Am a Black Woman

A 1971 poster designed and produced by Richard McCrary for the New York Committee to Free Angela Davis. It features a poem: "Angela, yes you are a black woman - and I want it to be known; The only thing you're guilty of, is being a black woman, to the bone / For such beauty to be held captive is really no mystery; It is because you are a black woman, truly black enough for me." Davis is an American political activist and academic, who led the US Communist Party. She was prosecuted for conspiracy, but later acquitted. A scarce poster. $2,750

Snapshots of Women in History

The Best Female Authors of All Time