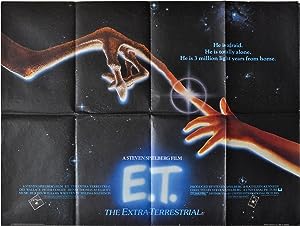 E.T. the Extra-Terrestrial (Original British poster for the 1982 film)

About this Item: Universal Pictures, Universal City, CA, 1982. Original British quad poster for the 1982 US film. Printed in England by W.E. Berry. Spielberg's multimillion dollar family fantasy, about a boy and the extraterrestrial he befriends. Elliott (Thomas), is a young boy who plays Dungeons and Dragons and lives with his mom (Wallace), his sister (a seven year-old Barrymore), and his brother (Robert McNaughton), in a typical American suburb-typical, until they meet E.T., an alien life-form with a sweet tooth who wants to return to his home planet. Elliott meets the alien one night and brings it into his home, keeping it a secret from his family and the community. Government agents eventually discover the alien and quarantine Elliott's house, bringing E.T. in for observation. Elliott and the alien have a strong, psychic connection, evidenced by their shared symptoms when E.T. becomes ill. With Elliott's perseverance and E.T.'s alien superpowers, the extraterrestrial returns home, but not before coining a few phrases ("phone home") and taking an iconic flight with Elliott on his bike before a full moon. "E.T". had an unparalleled impact on the culture and even buying habits of the Western world: the phrase "phone home" would become part of the American lexicon (if briefly), and sales for Reese's Pieces (E.T.'s food of choice) skyrocketed in the film's aftermath. Winner of several Academy Awards, with screenwriter Mathison was nominated for several awards, including an Oscar, a BAFTA, a Golden Globe, and a Hugo, and won several others, including a Writers Guild of American award and a Los Angeles Film Critics Association award. Quincy Jones and Michael Jackson won a Grammy for their E.T.-inspired 1984 album. Set in suburban Southwest, shot on location in Los Angeles and Redwood National Park in Crescent City, California. 30 x 40 inches, folded as issued. Light toning to the verso, and a few small tears, else Near Fine. National Film Registry. Lentz, Science Fiction, Horror & Fantasy Film and Television Credits (Second Edition, 2001), volume 2 US. Seller Inventory # 139049