You Searched For:
Author/Artist etc.: farington j and j c stadler
Edit Your Search
Results (1 - 6) of 6 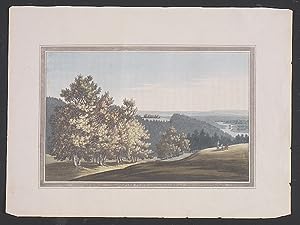 Views along the Thames] Scene at Park Place including the Druids Temple. 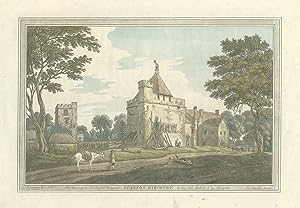 Views Along the Thames. Stanton Harcourt.

About this Item: Boydell J. and J. London, 1795. Aquatint printed in colours and finished by hand. Seller Inventory # 67421 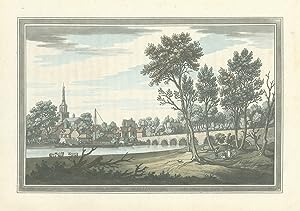 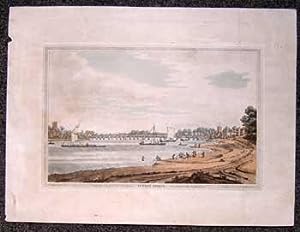 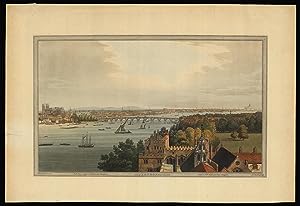 View of London from Lambeth

About this Item: Pub. By J & J Boydell, Shakspeare Gallery, Pall-Mall, and N. 90, Cheapside,, London, 1795. Boydell's Thames Hand-coloured copper engraving with aquatint. A view from St Mary Lambeth's tower looking across the Thames to Westminster Abbey, and up the river to the City of London. Westminster Bridge is in the centre, and Lambeth Palace, seat of the Archbishop of Canterbury, to the right.From the second volume of Farington's 'History of the River Thames', (London: J. & J. Boydell, 1794). The work, issued with plates either printed in sepia or coloured, contained two double-page spreads of London, this view from the west and a companion view from the Royal Observatory in the east. Joseph Farington wrote in his diary, on 17 August 1794: "Went to the top of Lambeth steeple to look at the view of London" (Farington). On 18 August he writes: "Went this morning to Lambeth & from the top of the Steeple began the view of London." Smirke dined with Farington on 3 September. J.C. Stadler, who would engrave the plates, joined them. The three men examined the drawings for the second volume of the book together, and voiced their approval of John Boydell's idea of providing two general views of London. Image: 305 by 520mm. (12 by 20.5 inches). Sheet: 470 by 685mm (18.5 by 27 inches). Adams 75/59; Joseph Farington, Diaries Vol 1: 1793 - 1802 (Hutchinson & Co: London, 1922). Seller Inventory # 12372 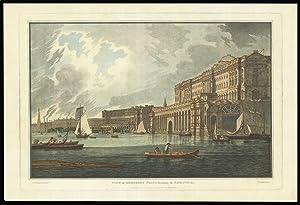 1] View of Somerset Place, including the Adelphi, &c; [2] View of London Bridge, Including the Church of St Magnus and the Monument; [3] View of Black-Friars Bridge and St Pauls Cathedral; [4] View of Westminster Bridge including Westminster Hall and the Abbey.

About this Item: Pubd. as the Act directs by W. Byrne No. 79 Titchfield Street, 1790-1791., 1790. No Binding. Condition: Fine. History of the River Thames Four etchings with aquatint, coloured, view of Westminster Bridge trimmed to upper and side neatline. A set of four prints of the River Thames, produced for Joseph Farington's series 'History of the River Thames'. Farington made 76 drawings of the course of the Thames, which required some negotiation: his wife's cousin, Horace Walpole, wrote to the Earl Harcourt asking for permission for Farington to sketch on his land. There was some delay between the drawings and publication while a suitable author was found to provide the accompanying text; Farington records in his diary on 15th July 1793 that publication "will now go on uninterruptedly as Mr. Coombe (sic) has promised to supply. manuscript as wanted" (Farington). William Combe was a somewhat surprising choice. Under his pen name, Dr Syntax, Combe had previously satirised travel books, in particular the work of William Gilpin. However, Combe was also notoriously bad with money, and probably welcomed the work.The prints show Somerset House, which had been rebuilt only 16 years before by architect Sir William Chambers to be used as government offices, the new London Bridge, Blackfriars Bridge, and the old Westminster Bridge. Joseph Farington (1747-1821) was an English artist and diarist. He was an original member of the Royal Academy, and helped found the now defunct British Institution. He specialised in topographical views of Britain, which were particularly popular while continental war prevented travel. The 'History of the River Thames' was very successful. A copy was presented to George III, who "turned over every leaf " with "approbation" (Farington).Joseph Constantine Stadler (fl.1780-1822) a German engraver, who settled in London in the 1780s, and specialised in aquatint engraving. Image: each 415 by 623mm (16.25 by 24.5 inches). Sheet: [1] 532 by 759mm (21 by 30 inches); [2 & 3] 562 by 751mm (22 by 29.5 inches); [4] 490 by 660mm (19.25 by 26 inches). BM 1880,1113.1442 (Somerset Place); BM 1880,1113.1550 (London Bridge); BM 1880,1113.1480 (Blackfriars); BM 1880,1113.1326 (Westminster); Joseph Farington, Diaries, Vol. 1: 1793-1802, (Hutchinson & Co., London: 1922). Seller Inventory # 12350