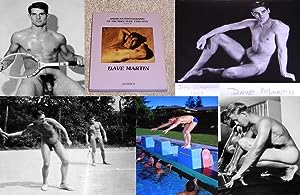 About this Item: Berlin, Germany: Janssen Publishers, 2001. Soft cover. Condition: Fine. 1st Edition. 1st Printing. Signed. 150 pages. Published in 2001. Rare Dave Martin collectible set. A pristine copy of "Dave Martin: American Photography of the Male Nude, 1940-1970" First Edition/First Printing with original vintage photographic print of "Jim Warren 1953", titled, dated, and signed by Dave Martin. The book and the print are now rare. An austerely elegant production by Janssen: Oversize-volume format. Pictorial softcovers with black titles on the cover and spine, as issued. Photographs and text by Dave Martin. He has contributed a concise essay, "A Brief History of The Male Nude In The USA", which appears as an Afterword in this book only. Printed on pristine-white, archival stock paper in Berlin, Germany to the highest standards. Without DJ, as issued. Presents "Dave Martin: American Photography of The Male Nude, 1940-1970". The pioneering work of a great photographer. Dave Martin was active for three decades, between the 1950's and 1970's. By common consensus, his best work was done during his first decade, when he set up shop in San Francisco, and somehow persuaded the athletes at nearby Stanford University to pose nude for him. Today, Stanford owns the single largest collection of Dave Martin's work (2600 prints), a proud and important part of its Permanent Photography Collection. The All-American look that remains pervasive to this day is due in large part to the efforts of pioneers like Lon of New York. Deeply influenced by the latter, Dave Martin sought to capture the look from the more casual, relaxed, and informal West Coast perspective, a brilliant counterpoint to Lon's Classically-inspired nudes, which capture the cosmopolitan East Coast and its Old World charm. That he would photograph the cream of the crop, Stanford University athletes, remains one of the major coups in the history of male nude photography. "Jim Warren 1953": Original vintage photographic print by Dave Martin, who produced his own prints, a practice that most contemporary photographers now largely consign to highly specialized print developers. The print measures 10 X 8 inches. Shows what is probably Dave Martin's single most handsome discovery, the Stanford athlete Jim Warren. Encased in its own protective plastic sheet. Jim Warren appears in the book, and is one of Dave Martin's most avidly collected models. He anticipates by more than thirty years the All-American supermodels of Bruce Weber, Herb Ritts, and Greg Gorman. An absolute "must-have" collectible, not just memorabilia, set for Dave Martin collectors. This title is now collectible. This copy of "Dave Martin: American Photography of The Male Nude" comes with an original vintage photographic print of "Jim Warren 1953", which is very prominently and beautifully titled, dated, and signed in pencil on verso by Dave Martin. Jim Warren is his real name, and he was an athlete at Stanford University. His portrait is one of the most beautiful male nudes we have ever seen. As far as we know, this is the only set available online and is in especially fine condition: Clean, crisp, and bright, pristine beauties. Please note: Dave Martin signed the print, NOT the book. The print is eminently suitable for framing. Copies available online of the book command between $500 and $1000. This set is surely an accessible and lovely alternative. A rare set thus. Lavishly illustrated with black-and-white plates, 1 original vintage photographic print. One of the finest American photographers of the male nude of the 20th century. A fine collectible set. (SEE ALSO LON OF NEW YORK TITLE IN OUR CATALOG) ISBN 3925443673. Signed by Author. Seller Inventory # 15282