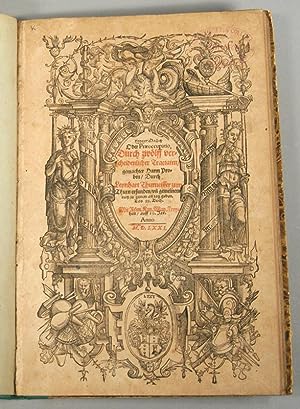 About this Item: 1571. THURNEISSER ZUM THURN, Leonhart. PROKATALEPSIS ODER PRAEOCCUPATION, DURCH ZWOLFF VERSCHEIDENLICHER TRACTATEN; GEMACHTER HARM PROBEN. Frankfurt: Johann Eichorn, 1571. First edition. Folio. Pp. [4], lxxxv, [2,1 blank]. Title red and black within an elaborate woodcut border. The first word in the title is transliterated from Greek. Portrait on Aii, framed by strapwork incorporating laboratory equipment and two nudes pouring chemicals. Colophon, on Hiiij recto, p.[lxxxv11]. Ex library, with the only markings being two faint, inconspicuous stamps. Bound in 18th century marbled boards, with new spine. The method of analysis and conclusions described in this book are noted by Johann Carl Moehsen p.72 and by Sprengel (Geschichte der Medicin, Halle, 1827, ii., p.499). Thurneisser or Thurneysser, as well as five other spellings, was born in Basel in 1530. His father was a goldsmith. Arrested for selling gilt lead as gold, Thurneisser fled Basel, fought in the army of Albert of Brandenburg, was captured and imprisoned. By 1558 he was a metallurgist in the Tyrol, then from 1560 to 1570 was sent to many countries by the Archduke Ferdinand to research metallurgy. In 1569 he first published his Archidoxa and in 1570 the Quinta Essentia. He wrote on chemistry, alchemy, meteorology, pharmacology and medicine, making it up as he went along. From 1570 to 1584 he was a physician in the court of the Elector of Brandenburg, who put at his disposal an abbey in Berlin, where he had a laboratory as well as a printing press, employed 300 people, and amassed a large fortune. This he lost in a divorce from his third wife, and left Berlin for Rome, Florence and Cologne. History sees him now as a flamboyant charlatan. (Bibliotheca Chemica, p. 453; D.S.B.). Seller Inventory # 87114 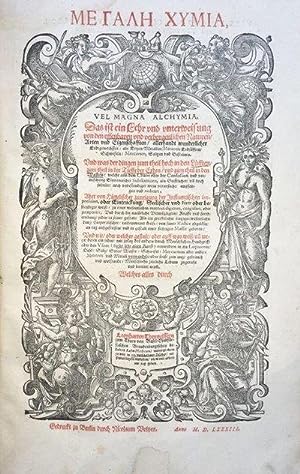 About this Item: Nikolaus Voltz, 1583., Berlin:, 1583. Two volumes in one. Folio. 368 x 238 millimeters. Melitsah: [*]2, )(2, *2, A-Zz2, a2. Megale: [*]2, )(2, ()2, A-Nn2. [Lacks index at the end, as usual (six leaves).] Pagination: [12], 188; [12], 144 pp. Both titles in red and black in fine woodcut borders, two woodcut portraits of Thurneysser, and numerous woodcuts, figures and tables, typesetting in numerous languages. The Melitsah has the two folding woodcut plates "Tabula Quarundam Syllabarum" & Tafel etlicher Sylben" which are symbolic illustrations of the four continents but lacks, as usual, the six plates of scripture tables, which Sudoff conjectures were available separately and thus often lacking. / Contemporary vellum, old ink manuscript spine title, edges red; soiled, tears in spine at cords, and head of spine, lacks ties. On first title page, small repaired pieces at bottom of title pages (removing previous owner's stamp?), red eagle stamp at ends and on folding plates (some obscured), light marginal dampstaining on a few leaves, plates reinforced at folds, minor worming in blank inner margin at end, good margins, some marginalia in an old hand. PROVENANCE: Early signature on first title of Andrae Mulleri Greiffen, 1677; previous owner's stamp "Ex Bibl. Germ. Sem." Very good. "A COMPREHENSIVE HISTORY OF ALCHEMY." First editions. Thurneisser (1530-1596) '. . .began life by learning the trade of his father, who was a goldsmith, but he also picked up some knowledge of botany, medicine, and, possibly, anatomy under Vesalius. In 1548 he left Basel, and went to England, France, and Germany, where he became a soldier. Afterwards he worked as a metallurgist, and again as a goldsmith. . . From 1560 to 1570 he was in the service of the Archduke Ferdinand, and travelled far and near, from the Orkney islands down to Africa, and to the East, everywhere learning medicine and metallurgy. . . From 1570 to 1584 he was physician to John Georg, Churfurst of Brandenburg, and had a laboratory and printing press in the so-called "Grey monastery" at Berlin. By various means he amassed a large fortune, and at one time employed between two and three hundred people. He collected a library, a museum, and a herbarium, kept a menagerie, and encouraged the fine and practical arts, such as the manufacture of saltpetre, alum, glass, paper, and also coloured glass. . . in 1579, he was accused by Joel of magic and of having a devil in a bottle which taught him to write languages he did not know. . .In 1584 he finally left Berlin, went to Italy, where he tried to practice medicine and alchemy; he was at Rome in 1591, and died in a monastery at Cologne 9 July, 1596, and was buried beside Albertus Magnus, according to his own request.' :: Ferguson. / "The works that Thurneysser published at this time were impressive examples of the printer's art, illustrated with woodcuts and etchings, and incorporating Greek, Arabic, Syrian, Hebrew, and Chaldean typefaces. . . His chief alchemical works, Megaln chymia and Melisath, were both published in Berlin in 1583." :: DSB. / 'The Magna Alchymia is of a more practical character than [Thurneisser's] other works and contains descriptions of preparations of sulphur, salts including sal urinae, mercury and its compounds, and metals, [as well as] a long section on astrology and horoscopes.' :: Partington II p. 155. / The Magna alchymia is in fact a comprehensive history of alchemy. It is divided into 9 chapters which are dealing with its substances: sulphur, salts, ammonium chloride, aluminum, saltpeter, and mercury. The seventh book refers to the planets and the sun, chapters eight and nine describe the origin of minerals and metals. / The Melitsah is ". . .a kind of dictionary directed to clarifying the works and ideas of Paracelsus, whose follower Thurneisser purported to be. But although he frequently quoted from Paracelsus, Thurneysser often invented the passages cited himself; and the Melisath contains citations of some eighty tracts by Paracelsus that never existed outside Thurneysser's own mind." - [DSB]. / For linguistic problems Thurneisser turned to the orientalist Elias Hutter (1553-c.1609), and the two Hebraists Valentin Schindler (d.1604) and Jakob Ebert (1549-1614). / "A huge pseudo-epigraphic literature of alchemical books was composed in Arabic, attributed to mostly Greek authors, historical or apocryphal (Plato, Aristotle, Hermes Trismegistus, Apollonios of Tyana, Zosimus). The names of Persian authors also appear (J?m?sb, Ostanes, Mani; cf. Sezgin, pp. 51-54, 59-60; Ullmann, pp. 183-86), testifying that alchemy-like operations on metals and other substances were also practiced in Iran. The great number of Persian technical names (zaybaq = mercury, noÅ¡?der = sal-ammoniac) also corroborates the idea of an important Iranian influence. We are still unable however to ascertain precisely whether all these texts are translations or texts written directly in Arabic from a Greek model in the Islamic area, which certainly occurred in several cases (Vereno, 1992, pp. 134-339); nor can we really reconstruct the historical evolution of the rise and development of alchemy in the Islamic world. Several Muslim authors also started writing on alchemy, but we do not know exactly who and when. Even if the texts attributed to ?Ali b. Abi ??leb (Corbin, 1986, Pt. I), the Umayyad Prince ??led b. Walid or Ja?far al-??deq (Ruska, 1924, I and II) are apocryphal, there is no doubt that alchemy was widely practiced from the 8th century (2nd century A.H.) onwards. It was not only translated from Greek into Arabic, but also Islamicized, re-thought within the frame of Islamic conceptions, references, and symbols. This science was generally called al-?an?a al-el?hiyya, the divine art. The name kimi? (Gr. kh?meÃa, the art of alloying the metals) seems to have been used at first in a rather pejorative way (meaning something like 'trickery'; cf. Sezgin, pp. 3-7)." :: Pierre Lory for the Encyclopedia Iranica. / The multi-language typesetting i. Seller Inventory # S13125