Beating the Invader by Winston Churchill

You Searched For:
Author/Artist etc.: winston churchill ,
Title: beating the invader
Edit Your Search
Results (1 - 4) of 4 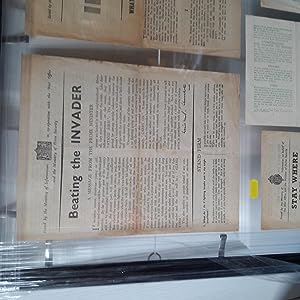 Beating the Invader [framed with 4 other anti-invasion leaflets]

Winston Churchill and Ministry of Information

About this Item: Ministry of Information and Ministry of Home Security, 1941. Soft cover. Condition: Good. Beating the Invader is a rare two-sided leaflet. Good condition with trivial tanning at edge. 11 x 8.25 inches. Few copies still exist. Crease in middle, showing thinnest of splits of 1 cm. each side. Otherwise very clean. Not an over-printed reissue. Churchill's rallying cry to resist the invader even after the Blitz crisis of 1940. Instructions about emergency communications, exhortations on use of cars, food supplies etc. Mounted on plastic perspex frame with four other two-sided single-page leaflets in generally good condition: (1) "If the Invader Comes" (June 1940; 2.5 cm. ink line NW to SE at bottom of front page); (2) "Stay Where You Are" (Ministry of In formation, n.d.), (3) "The Duties of Civilians Under Invasion Conditions" (Horsham Urban District Council, September 3, 1941), and (4) "After the Raid" (Ministry of Home Security Provincial edition, December 1940). Plastic perspex see-through frame is about 22 x 25 inches square. Obviously, given its size, postage charges and mode of delivery tbc. Weight with frame about 2.5 kilo. Seller Inventory # 439 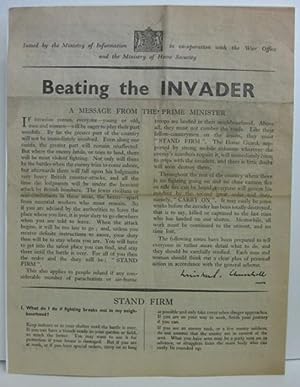 Beating the Invader; A Message from the Prime Minister

About this Item: London Ministry of Information 1941, 1941. Condition: very good. 1st edition, 1st state. 2pp. Single sheet printed on both sides. Creased from old folds. Slight soiling. Otherwise a well preserved copy. very good Woods A69: "There is also a later version of this leaflet, overprinted in red in the top left-hand corner, with a message regarding the evacuation of invaded areas." This copy has no red overprinting and is therefor the first state. The document is Churchill's message to the people of England regarding what to do in case of invasion. His personal message is followed by 14 notes which Churchill says "should be carefully studied.". The subtitles for each section, some of which contain multiple notes, are: "Stand Firm," "Carry on," "Advice and Orders," "Instructions," "Food," "News," "Motor-Cars," and "The Enemy.". Seller Inventory # 127718 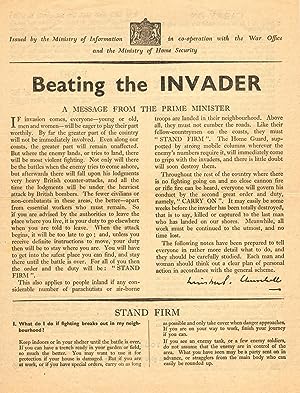 Published by Ministry of Information, London (1941)

About this Item: Ministry of Information, London, 1941. Leaflet. First edition. "If invasion comes, everyone - young or old, men and women - will be eager to play their part worthily." This wartime leaflet is a tangible reminder that, in the early days of 1941, the outcome of the war was not a foregone conclusion and Britain's peril was quite real. The leaflet provides instructions from the Ministry of Information and Prime Minister Winston Churchill regarding what to do in case of invasion. Measuring 11 inches by 8.25 inches, the leaflet is printed on both sides of a thin, single sheet of paper. On March 10, 1941, at the request of the Ministry of Information, Churchill wrote the introduction to this leaflet. His introduction takes up two-thirds of the first page. After sober consideration of the timing and effect of such a message to the British people, the War Cabinet decided on April 24, 1941 to print more than 14 million copies and distribute the leaflet to all British households. Today these leaflets are scarce. In his Bibliography, Ronald Cohen writes: "The huge print run might leave one with the impression that the leaflet would be commonly found today. It was, however, only a leaflet anticipating an event that never came to pass. Few copies have survived." Here is a very good plus, notably clean and complete example for collectors. The paper suffers no losses, no spotting, and no soiling. We note only a very faint "5591" in pencil to the blank bottom margin of the verso which we have not attempted to erase. Searching for flaws, we observe truly trivial wear along the left edge. The age-toning is moderate and uniform. The only creasing marks noted are the customary horizontal and vertical folds, but this copy must have been long stored flat, as the original folds are faint. There is slight wear and creasing along the top edge. Not quite fine, but certainly a collector-worthy copy of this fragile and compelling bit of wartime history. Bibliographic reference: Cohen B76, Woods A69. Seller Inventory # 003958 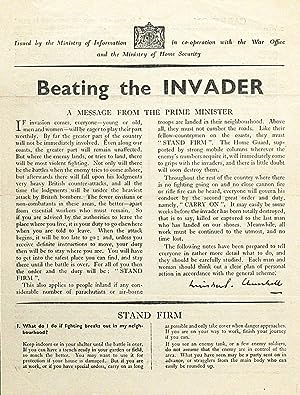 Published by Ministry of Information, London (1941)

About this Item: Ministry of Information, London, 1941. custom folder. Condition: Fine. First edition. CHURCHILL WARNS THE ENGLISH PEOPLE TO "STAND FIRM" IN THE FACE OF A GERMAN INVASION. In early 1941, when a German invasion of England seemed a very real possibility, Duff Cooper, then Minister of Information, helped draft a document to distribute to the people with information on what to do in the event the Germans landed on English soil. "While the document [Beating the Invader] was prepared as a how-to or what-to-do document by Duff Cooper's Ministry of Information, it opens with Churchill's powerful and inspirational introduction, in which he begins with the bravery-invoking assumption, 'If invasion comes, everyone-young or old, men and women-will be eager to play their part worthily.' Noting that the greater part of the country will be unaffected by any invading force, he assures his readers that the British forces will do their part, inflicting 'very heavy British counter-attacks' on the enemy as they land by means of bomber attacks on their lodgments. "He goes on: 'The fewer civilians or non-combatants in these areas, the better-apart from essential workers who must remain. So if you are advised by the authorities to leave the place where you live, it is your duty to go elsewhere when you are told to leave. When the attack begins, it will be too late to go; and unless you receive definite instructions to move, your duty then will be to stay where you are. You will then have to get into the safest place you can find, and stay there until the battle is over. For all of you then the order and the duty will be: "STAND FIRM." "Even where there is not substantial fighting, presumably away from the coasts, Churchill advises that everyone must be bound by the second great order and duty, namely, 'CARRY ON. It may easily be some weeks before the invader has been totally destroyed, that is to say, killed or captured to the last man who has landed on our shores. Meanwhile, all work must be continued to the utmost, and no time lost.' "Encouraging all to assume their part in the defence of their island home, he concludes his introduction by writing: 'The following notes have been prepared to tell everyone in rather more detail what to do, and they should be carefully studied. Each man and woman should think out a clear plan of personal action in accordance with the general scheme.' And the document is influentially signed in facsimile: "Winston S. Churchill."' Following Churchill's introduction is a "list of 'tips' cover[ing] a range of potential actions and reactions of the brave Britons, then essentially alone in their resistance to the Axis (with the obvious exception of Britain's Commonwealth partners). The two-sided leaflet is characterized by all-caps subject headings such as 'STAND FIRM' and 'CARRY ON' and a series of fourteen questions and answers drafted by the Ministry of Information and issued under the combined authority of the War Office and the Ministry of Home Security. "The huge print run might leave one with the impression that the leaflet would be commonly found today. It is not. Its relative scarcity is understandable; it was, after all, only a leaflet anticipating an event, which never came to pass. In the result, although it was very widely distributed, relatively few copies have survived." (Ronald I. Cohen, Churchill Bibliographer, "Preparing for an Invasion of Britain. In Writing", Finest Hour 181, Summer 2018). First printing. London: Ministry of Information, 1941. One sheet (8.5x11 inches), printed on both sides. An exceedingly well-preserved copy of a notoriously fragile item, with only very mild folds and minuscule wear to bottom right corner. Housed and protected in custom cloth presentation folder. As fine a copy as one could hope to find. Seller Inventory # 2288