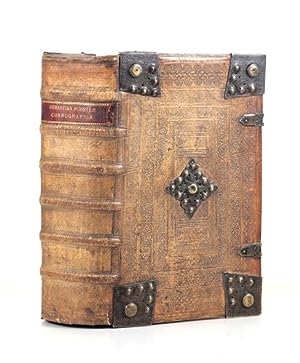 About this Item: Added finely engraved title by M. Merian (with a port. of Münster), woodcut port. of the author on verso of title, one folding plate (between pp. 1040-41), & 1490 woodcuts in the text (of which 26 are double-page maps & 72 are double-page plans & views). Printed title in red & black. 14 p.l. (incl. the engraved title, the 7th leaf a blank), 1752 pp. Large thick folio, cont. blindstamped panelled pigskin over thick wooden boards (some inevitable browning due to the quality of the paper), eight decorated brass corner-pieces & a central boss on each cover, orig. catches & two clasps (the leather of the lower renewed). Basel: Henricpetri, 1628. A very impressive and broad-margined copy in its original binding with all the metal "hardware" of the best, largest, and final edition (1st ed.: 1544) of the famous Cosmographia by Münster (1489-1552), the great cartographer, mathematician, and cosmographer. This was the first detailed scientific and popular description of the world in German and played an important role in the revival of geography in Europe. It was one of the most successful texts of the 16th century and enjoyed numerous translations and editions. Our edition has 400 more woodcuts than the 1614 edition and an additional 900 woodcuts when compared to the first edition. It contains two world maps, maps of Europe, England, Spain, France, Germany, the Rhineland, Swabia and Bavaria, Franconia, Silesia, Bohemia, Hungary, Transylvania, Dalmatia and Croatia, Italy, Scandinavia, Greece, Asia, Asia Minor, the Holy Land, Sumatra, Africa, and America. There are many city views including most of the major European cities, and also Jerusalem and Mexico City. Also included are woodcut portraits of royalty, nobility, and notable figures of each country's or region's history; coats-of-arms; historical scenes; images of regional plants and animals; American Indians, etc. While there is some browning, this is a quite wonderful copy in original state. 18th-century ownership inscription on the free front endpaper "Bibliotheca Hermanniana Argentorati." The clasps are signed "PB." ? Alden 628/84. Sabin 51396. Seller Inventory # 3727 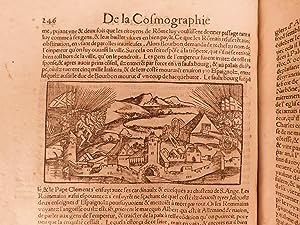 About this Item: Michel Sonnius/Nic. Chesneau, 1575. Hardcover. Condition: Near Fine. 1575 Cosmographia Munster Fragment Punic Wars Milan Woodcuts ROME Nero BIZARRE Sebastian Münster s Cosmographia was the first German description of the world. First published in 1544, this work was one of the most popular books in the world much in part to the exquisite woodcut engravings many of which were by the famed Hans Holbein. This example is a fragment from the 1575 Paris edition; and while this example is merely 47 leaves, it is filled with the expected fascinating woodcuts including portraits, landscape and city views, agriculture, and much more. A few of the more notable illustrations include: Early view of Milan View of Bologna Agriculture, vegetables; farming scenes in Italy; animals Roman soldiers from the Punic Wars Bizarre scenes lynchings; crude acts with animals Portraits Saint Peter Claudius Nero Otto I Aulus Plautius Flavius Titian Domitian Marcus Ulpius Traianus Marcus Aurelius Commodus Maximus Diocletian Valerian Constantine And many more Item number: #7447 Price: $950 MUNSTER, Sebastian Cosmographia [Paris] : [Michel Sonnius/Nic. Chesneau], [1575] Details: Collation: A collection of various pages that include: 145-152, 161-162, 167-188, 197-200, 205-208, 211-246, 251-256, 259-262, 265-268, 273-274, 277-278 62 woodcut engravings Language: Latin Binding: Leather; tight & secure Size: ~13.5in X 8.75in (34.5cm x 22cm) Our Guarantee: Very Fast. Very Safe. Free Shipping Worldwide. Customer satisfaction is our priority! Notify us with 7 days of receiving, and we will offer a full refund without reservation! 7447 Photos available upon request. Seller Inventory # 7447 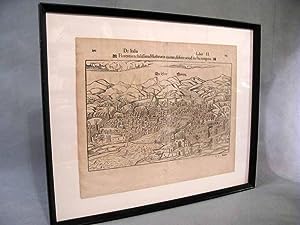 About this Item: S. Münster, Basle, 1550. Leaf. Condition: Very Good. 12 1/2" x 15 1/2" [32cm x 39.5cm] folio leaf [double-page], museum framed. Wonderful map of Florence from the c. 1550 'Cosmographia', by Sebastian Münster (1488-1552), the seminal work of early geographical compendia, featuring woodcuts from such renowned artists as Hans Holbein the Younger, Urs Graf, Hans Rudolph Manuel Deutsch, and David Kandel. This bird's eye view of Florence is exceptional and is in Very Good condition. Deaccessioned from the Andrew Dickson White Museum of Art, Cornell University. In a simple black wood frame [17" x 21"], under glass, without museum markings [as others from this single acquisition of several pieces were]. Leaf is tipped in and unmatted. Well preserved, with some age-toning overall, darker at the extreme edges. The fold is visible, as would be expected, but is minimal. A nice early map of Florence. The volume from which this leaf came fetches $60,000 and more at auction. Note: There are now artists specializing in applying period-style watercolor to such woodcuts, greatly enhancing their visual appeal; this map would be a good candidate for coloring, I believe. *Photos may show distortions (lens curvature, angled view, reflections, etc.) as the item is under glass. Seller Inventory # 03835 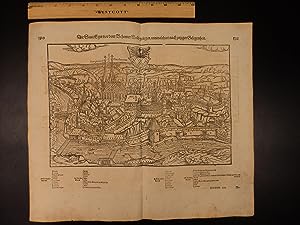 About this Item: Published: 1628, 1628. No Binding. Condition: Very Good. 1628 MAP City of Cheb CZECH Republic Sebastian Münster Cosmographia Prague Eger Sebastian Münster (1488 1552), was a German cartographer, cosmographer, and a Christian Hebraist scholar. His work, the Cosmographia from 1544, was the earliest German description of the world. The Cosmographia by Sebastian Münster (1488 1552) from 1544 is the earliest German description of the world. It had numerous editions in different languages including Latin, French (translated by François de Belleforest), Italian, English, and Czech. The last German edition was published in 1628, long after his death. The Cosmographia was one of the most successful and popular books of the 16th century. It passed through 24 editions in 100 years. This success was due to the notable woodcuts (some by Hans Holbein the Younger, Urs Graf, Hans Rudolph Manuel Deutsch, and David Kandel). It was most important in reviving geography in 16th-century Europe. Main author: Munster Title: Die Statt Eger von dem Behemer Wald gelegen/contrasehtet nach jetziger Gelenheit. Published: 1628 Language: Latin & German FREE SHIPPING WORLDWIDE Wear: wear as seen in photos Publisher: 1628 Size: ~16.5in X 14.25in (42cm x 36.5cm) Photos available upon request. Seller Inventory # ABE-14710315010 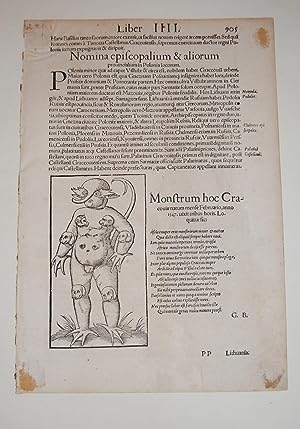 About this Item: [Heinrich Petri,] [1559.], [Basel:], 1559. Page 905. Single leaf. Minor bleed through on corners from mounting. Mounted on larger plain leaf. Suitable for framing. ?At page 905 is text and the portrait of a monster who was born at Cracow in February, 1547, and lived three hours. It is a boy whose feet and hands terminate in four duck-like webs instead of fingers and toes. There grows out of each knee and out of each elbow a dog?s head, being four in all, while from each of his breasts protrudes the head of a ram. At the bottom of the breast bone in his belly is an extra pair of eyes; a forked tail waves up to his head. He has a long and flexible elephant?s proboscis in place of an ordinary nose; large and round, saucer-shaped eyes, and an extra pair of ears growing out of the corner of his eyes, which, as well as the ears in their usual position, are formed like that if a rabbit.? [-p.449 American Philo Society. Vol.18, Henry Phillips, Jr]. Citations: Wellcome EPB 4477 (1552 ed.). Seller Inventory # 15250