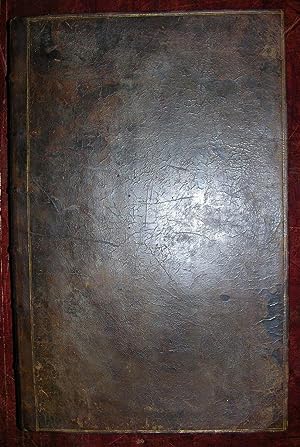 About this Item: Leiden: Franciscus Hackius; Amsterdam: Elzevir, 1648., 1648. 2 parts in one volume. Folio (15 4/8 x 9 6/8 inches). Engraved title-page by Theodor Matham, with about 540 woodcut illustrations after Georg Marcgraf and Albert Eckhout (light spotting throughout, one or two marginal tears). Contemporary calf gilt, the spine in seven compartments, with 6 raised bands, gilt-lettered in the second, the others decorated with fine gilt tools (expertly rebacked preserving most of the original spine, corners strengthened). Provenance: with the ink library stamp of naturalist Georges Cuvier (1769 - 1832) on the dedication leaf, and with his pencilled marginal annotations to the sections on fish and birds; also with the ink library and discard stamps of the Musee d'Histoire Naturelle, Paris, on the dedication leaf. FIRST EDITION OF THIS IMPORTANT SCIENTIFIC WORK ON BRAZIL FROM THE LIBRARY OF EMINENT NATURALIST GEORGES CUVIER Described by Borba de Moraes as the most important seventeenth-century scientific work completed in Brazil, this work was written by Piso, physician to the Count of Nassau, and the naturalist Marcgraf. Piso's De medicina Brasiliensi details the herbs of Brazil and their healing powers, local diseases and poisonous reptiles. Marcgraf's Historia rerum naturalium Brasiliae describes the plants, trees, animals, insects, marine life and shellfish of Brazil. The eighth and last part of Marcgraf's Historia was written by de Laet, and describes the north-eastern region of Brazil and its inhabitants. This part, according to Moraes, 'is very valuable from the ethnographic and linguistic aspect'. Marcgrave was initially commissioned by the Dutch West India Company to travel to north-east Brazil as an astronomer. Along with another student of medicine and mathematics, H. Cralitz (who succumbed to disease within a year of his arrival), and the physician, Willem Piso, he arrived in Brazil in 1738. Marcgrave travelled extensively, collecting all manner of plants and animals, before he was unexpectedly called upon to travel to Angola, whereupon he too died. So Piso returned to Holland with Prince Maurits, and without Marcgrave or Cralitz, but "laden with considerable collections of specimens and the confusing notes of Marcgrave. The astronomer had written his natural history findings in a cipher, purportedly to prevent Piso claiming credit for the work. Piso's contributions to the first edition of "Historia Naturalis Brasiliae" (1648) were contained in four books of 12 volumes, under the heading "De medicine Brasiliense", while eight volumes on botany and zoology were compiled from the material authored by Marcgrave. Johannes de Laet (1593-1649), director of the Dutch West India Company, decoded and edited Marcgrave's work for this edition, but when a second edition of the "Historia" appeared ten years later under the title "De Indiae Utrusque re naturali et medica", Piso carelessly made his own treatment of Marcgrave's work. For this he was severely criticised by, among others, Carl Linnaeus. "While both men obviously made remarkable contributions to the knowledge of Brazil's natural history, Marcgrave's work is considered in many quarters to exceed that of Piso in quality as well as quantity, despite his shorter years. A large map of Brazil produced by Marcgrave was also published posthumously in 1747. Indeed, after these explorations, nothing was written on Brazilian botany for more than 150 years except for the observations made by La Condamine in the mid-1700s. Although Rio de Janeiro was an international shipping port in the 17th and 18th centuries, few ventured beyond the city, largely thanks to the intimidating rule of Spanish and Portuguese administration" (Natural History Museum online). From the prestigious libraries of naturalist Georges Cuvier, and the Musee d'Histoire Naturelle in Paris that he founded. "Without a doubt, Georges Cuvier possessed one of the finest minds in history. Almost single-handedly, he founded vertebrate paleontology as a scientific discipline and created the. Seller Inventory # 72nhr208