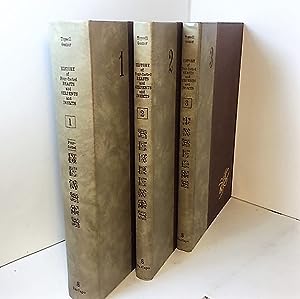 History of Four-footed Beasts and Serpents and Insects

About this Item: Da Capo Press, 1967. Hardcover. Condition: Very Good. 3 Volume 1967 unabridged reprint of the 1658 edition of The History of Four-footed Beasts and Serpents and Insects published in London and reproduced from a copy of the Rare book Collection of the Library of the American Museum of Natural History. Gilt illustration to front cover is bright. Some rubbing to boards and some light colored paint or ink splashes on brown paper covered board of volume 2 and bottom rear board of volume 3. A two inch tear in FFEP of volume one. Otherwise the interior is crisp and free of marks. Oversize may require additional shipping. Seller Inventory # 111720004 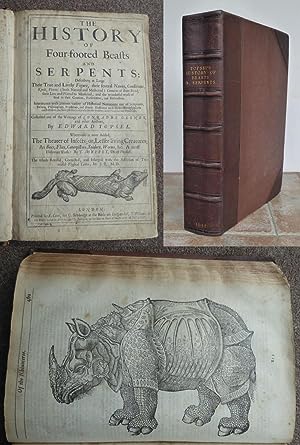 THE HISTORY OF FOUR-FOOTED BEASTS AND SERPENTS, whereunto is now added the FIRST EDITION IN ENGLISH OF THEATER OF INSECTS .

Published by London printed by E. Cotes for G. Sawbridge at the Bible on Ludgate-hill T. Williams at the Bible in Little-Britain and T. Johnson at the Key in Pauls Church-yard (1658)

About this Item: London printed by E. Cotes for G. Sawbridge at the Bible on Ludgate-hill T. Williams at the Bible in Little-Britain and T. Johnson at the Key in Pauls Church-yard, 1658. Hardcover. Condition: Very Good. 2nd Edition. Describing at large their true and lively figure, their several names, conditions, kinds, virtues (both natural and medicinal) countries of their breed, their love and hatred to mankind, and the wonderful work of God in their creation, preservation, and destruction. Interwoven with curious variety of historical narrations out of Scriptures, fathers, philosophers, physicians, and poets: illustrated with divers hieroglyphicks and emblems, &c. both pleasant and profitable for students in all faculties and professions. Collected out of the writings of Conradus Gesner and other authors, by Edward Topsel. Whereunto is now added, THE FIRST EDITION IN ENGLISH OF THE THEATER OF INSECTS; or, Lesser living creatures: as bees, flies, caterpillars, spiders, worms, &c. A most elaborate work: by T. Muffet, Dr. of Physick. The whole revised, corrected, and inlarged with the addition of two useful physical tables, by J.R. M.D. SECOND EDITION of the first 2 parts, revised and corrected edition in 3 parts each with its own title page, 1658. Folio bound in sixes, approximately 320 x 200 mm, 12½ x 8 inches, woodcut illustration to title pages, numerous woodcut illustrations to text including some full-page, pages: [16], 1-818, [18], 889-1130, [6], including half-title, collation the same as ESTC. Bound in 19th century half morocco, gilt title to spine and date at foot of spine, endpapers replaced when bound, cloth covers. Binding rubbed and some scuffing, black ink stain to top of lower cover, shelf wear to edges of covers, half-title and title page dusty with narrow strengthening repairs to edges on blank side, tear to corner of page 198, with loss of text (see attached image), facsimile loosely inserted with the missing text, 5 inch neat repair with old paper to 1 margin, not affecting text, several other minor repairs to margins, not affecting text, 2 short closed tears just running into text, but no loss, occasional small closed tear to margins, a few tips of top corners missing all nowhere near text, pale browning and stainning to margins, old ink name and date to half-title, a good copy of a work often found defective and in bad condition, it was one of the great picture books of the 17th century and well used. See: A Catalogue of Printed Books in the Wellcome Library, Volume 5, page 285; A Bibliography of British Lepidoptera 1608-1799 by Arthur A. Lisney, page No. 6; British Bee Books A Bibliography 1500-1976, page 42 & 43, No.17; Mary Aslin, Catalogue of the Printed Books on Agriculture 1471-1840, page 128; G.E. Fussell, Old Engish Farming Books 1523 to 1730, page 34; ESTC R6249. The origin of Little Miss Muffett is most commonly attributed to Dr. Thomas Muffett, a physician and entomologist from the 16th century, the author of a scientific illustrated guide about insects. Little Miss Muffett is about a girl named Patience, who was Dr Muffett's stepdaughter. MORE IMAGES ATTACHED TO THIS LISTING, ALL ZOOMABLE, FURTHER IMAGES ON REQUEST. POSTAGE AT COST. Seller Inventory # 31464

The history of four-footed beasts and serpents:Êdescribing at large their true and lively figure, their several names, conditions, kinds, virtues (both natural and medicinal) countries of their breed, their love and hatred to mankind, and the wonderful work of God in their creation, preservation, and destruction. Interwoven with curious variety of historical narrations out of Scriptures, fathers, philosophers, physicians, and poets: illustrated with divers hieroglyphicks and emblems, &c. both pleasant and profitable for students in all faculties and professions. Collected out of the writings of Conradus Gesner and other authors, by Edward Topsel. Whereunto is now added, The theater of insects; or, Lesser living creatures: as bees, flies, ca

About this Item: London:, 1658. Condition: Fine. Profusely Illustrated with Woodcuts of Animals - Including Mythical Beasts & New World SpeciesFolio:32 x 21 cm.[16], 818, [18], 889-1130, [6] p. Collation: A8, B-Z6, Aa-Zz6, Aaa-Zzz6, Aaaa4 (Aaaa2 signed Aaaa3); Ff-Zz6, Aaaaa-Cccc6, Dddd4. Lacking half-title.SECOND EDITION of the first two parts. FIRST EDITION of the "Theatre of Insects".Bound in 19th c. speckled calf gilt (rebacked), edges dyed red. Profusely Illustrated with detailed woodcuts of animals. A very good copy, variable light foxing, a few small rust holes, the occasional ink spot, and marginal tears.Topsell's magnificent zoological encyclopedia, the first illustrated natural history in English devoted solely to animals. Vol. 1 is largely a translation of books 1 and 5 of the "Historia animalium", a landmark in zoological literature, written by the great Swiss naturalist Conrad Gessner, with additions by Topsell. The third part is the first English edition of Thomas Moffet's "Insectorum theatrum", also an adaptation of Gessner. All three volumes are magnificently illustrated with fine woodcuts (including "D rer's" rhinoceros). The second and third parts have separate title pages.Topsell's was the first illustrated English natural history of animals. The work upon which it was originally based, Conrad GessnerÕs ÒHistoria AnimaliumÓ, is a landmark in the study of the animal kingdom. Drawing on a wealth of authorities both ancient and modern and illustrating his works with highly detailed and Ðto the degree possible- accurate woodcuts of the animals that he described, Gessner set a new standard for zoological literature. His encyclopedia eclipsed all other attempts at a comprehensive work on the subject, displacing AristotleÕs own ÒHistoria AnimaliumÓ and substituting for it a tour-de-force of Renaissance humanist science. In his adaptation, Topsell follows Gessner's organizational scheme. For each animal, he divides his discussion into eight categories: 1. The animal's name in several languages, 2. A physical description of the animal and its habitat, 3. Its bodily functions and the diseases that afflict it, 4. Habits and instincts, 5. The animal's utility to humans, 6. How it is used for food, 7. Its use in the preparation of medicines, 8. Its significance in religion, poetry, proverbs, place-names, etc.New World animals described by Gessner and Topsell include the armadillo, sloth, beaver, bison, tamarin, and the Brazilian sagouin monkey. Monsters and mythological animals include the ÒHydraÓ (with two claws, a curled serpentÕs tail, and seven small mammalian heads), the ÒLamiaÓ (with a cat-like body and womanÕs face and hair), the ÒMantichoraÓ (with lionÕs body and mane, a manÕs face and hair, and a grotesquely smiling mouth), the unicorn, and a 120-foot long sea serpent.Topsell gives numerous examples of interactions that demonstrate affinities between humans and animals, such as tales about dogs fighting to the death to protect their masters, of elephants falling in love with women, of a dragon avenging the death of his human friend, etc. Topsell and Gessner are particularly fond of dogs; they dedicate 40 pages of text and illustrations to various breeds.In addition to Topsell's "Beasts" and "Serpents", the 1658 combined edition is important for its inclusion of the first English translation of Thomas Moffet's "Theatre of Insects", a book with a complex history. When Conrad Gessner died in 1565 he left an unfinished book on entomology: this was eventually sold to his friend Thomas Penny, who had already done some work of his own on GessnerÕs collection of insects. Penny also acquired the notes on insects made by Edward Wotton of Oxford, and made some progress in amalgamating the information before his death in 1589. The work was then rescued from PennyÕs heir by his Cambridge friend Moffet, who added a number of descriptions and drawings from his own observations in England and on the Continent -including a number of Òlesser living creaturesÓ, spiders, crustacea. Seller Inventory # 3944