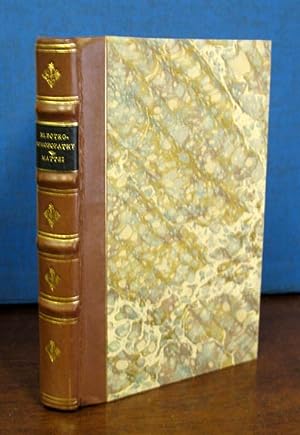 PRINCIPLES Of ELECTRO-HOMOEOPATHY. A New Science Discovered by Coiunt Cesar Mattei, of Bologna

About this Item: Printing and Stereotype Offices V.-E. Gauthier and Co, Nice, 1880. 1st Edition in English. [2], 6, 235, [5] pp. Frontis, "C. Mattei". 3 views of human figures, pp. 236 - 237. 8vo. 7-1/8" x 4-5/8" Electro-homoeopathy is a derivative of homeopathy that originated with Count Cesar Mattei of Bologna. The name is derived from a combination of electro (referring to an electric bio-energy content supposedly extracted from plants and of therapeutic value, rather than electricity in its conventional sense) and homeopathy (referring to an alternative medicinal philosophy developed by Samuel Hahnemann in the 18th century). Electro-homeopathy has been defined as the combination of electrical devices and homeopathy, however some contend that it is the therapeutic use of homeopathic preparations of certain "electric bio-energy" herbs that is intended by the term. The discipline is regarded as distinct from traditional homeopathy, which relies on serially diluted remedies of substances that cause similar symptoms to those as it is attempting to cure; electro-homeopathy, however, does not directly follow the "law of similars".Mattei studied natural science, anatomy, physiology, pathology, chemistry and botany. He ultimately focused on the supposed therapeutic power of 'electricity' in botanical extracts, making bold, ultimately unsupported, claims for the efficacy of his treatments, including the claim that his treatments offered a non-surgical alternative to cancer. Not surprisingly, his claims were met with skepticism by established medical authorities. Notwithstanding criticisms, including a challenge by the British medical establishment to the claimed success of cancer treatments, electro-homeopathy (or Matteism, as it was sometimes known at the time) was embraced and by the beginning of the 20th century had adherents in Germany, France, the USA and the UK; it had been the subject of approximately 100 publications and there were three journals dedicated to it.After Mattei's death, his work was built upon by Theodore Krauss (1864 - 1924) who amplified the number of available treatments, including the introduction of injectable forms of treatment, and modernized production processes. [Wiki]. Scarce book on the subject- OCLC records 6 cc worldwide, with just 2 in the US. ABPC shows no copies at auction these past 30+ years. Binding - Fine. Textblock - VG+ (occasional po pencil underlining & marginal notes). Modern brown quarter calf binding with marbled paper boards. New eps. Seller Inventory # 33872