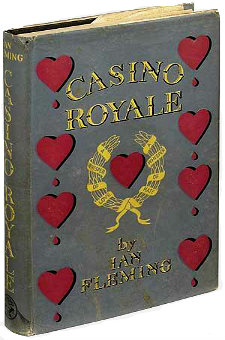 Doesn't have quite the same ring to it as the more famous Bond. James Bond, does it? Nevertheless, the creator of the charming rogue spy was English author and journalist Ian Lancaster Fleming (not Ian Flemming, though it is a very common misspelling) born in London in 1908. Ian Fleming was raised in England, part of a privileged upper-class family with as much prestige, respect and social standing as wealth. When Fleming's father, Valentine Fleming, died, his obituary was written by Winston Churchill.

Fleming attended Eton College and was always fascinated by words, studying languages such as German and French, and developing an interest in writing early on. It ran in the family - his brother Peter was a travel writer. Fleming also had a keen interest in military and government and was a personal assistant and Intelligence officer in the Royal Navy during World War II. Fleming's military career is more thoroughly detailed in the BBC miniseries Fleming: The Man Who Would Be Bond, which premiered on American tv in January 2014. The role of Ian Fleming is played by actor Dominic Cooper.

Fleming's attraction to the military may be attributable to his father, who was a war hero killed in World War I. Regardless, Fleming's work during the war likely provided background for his James Bond stories, and many of the people, places and particulars of his novels are purported to be based on real details of Fleming's life. For instance, during his time in the Naval Reserve, his known code name was 17F, which could have given him the later idea for Agent 007, also known as, you guessed, it, James Bond. The prep school he attended growing up was next to the estate of a family called Bond, whose family motto was "The World is Not Enough". And during his time in WWII, Fleming was integral in developing a secret communication plan whose code name was Operation Goldeneye.

While he is best known for James Bond, Fleming also wrote two non-fiction books, The Diamond Smugglers (1957) and Thrilling Cities (1963) as well as a children's book, Chitty Chitty Bang Bang (1964).

Fleming was a heavy smoker and drinker. After a heart attack in 1961, he succumbed to his next one and died in 1964. To commemorate the centenary of Fleming's birth, a book titled Devil May Care by Sebastian Faulks (writing as Ian Fleming) was released in 2008 and breathed new life into Bond. There were other writers who tried their hand at the James Bond franchise, including Kingsley Amis (writing as Robert Markham) and John Gardner.

There are many biographies about Fleming; among the most notable are The Life of Ian Fleming by John Pearson and Ian Fleming by Andrew Lycett. For the reader dedicated to collectible Ian Fleming books, there are many first edition James Bond books in various printings, conditions and price points to suit every collector's desires.

Search for James Bond and Other Ian Fleming Books

Collectible copies of Diamonds are Forever

From Russia with Love

Collectible copies of From Russia with Love

Collectible copies of Dr. No

For Your Eyes Only

Collectible copies of For Your Eyes Only

The Spy Who Loved Me

Collectible copies of The Spy Who Loved Me

On Her Majesty's Secret Service

Collectible copies of On Her Majesty's Secret Service

You Only Live Twice

Collectible copies of You Only Live Twice

The Man with the Golden Gun

Collectible copies of The Man with the Golden Gun

Octopussy and the Living Daylights

Collectible copies of Octopussy and the Living Daylights

Other Books by Ian Fleming

Collectible copies of The Diamond Smugglers

Watch: How to Identify a First Edition Book

Which James Bond villain was most nefarious?