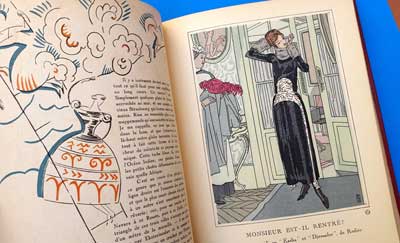 In the early part of the 20th century, people didn't have the Internet to help discover the latest fashion trends. There were no photographs of celebrities wearing designer dresses, nor were there umpteen fashion magazines at the local grocery store. Considered an elitist publication, targeting the upper class of Paris, the Gazette du Bon Ton (roughly translated to The Journal of Good Taste) was an exclusive French magazine founded by Lucien Vogel that highlighted the connections between art, fashion, beauty and lifestyle.

According to AbeBooks' seller Antipodean Books, Maps & Prints, ABAA, "The Gazette du Bon Ton was a leading fashion magazine published between 1912 and 1925, the highlight of which were 10 colored plates in each issue. The magazine signed exclusive contracts with seven of Paris's top couture houses (Cheruit, Doeuillet, Doucet, Paquin, Poiret, Redfern, and Worth) so that the designers' fashions were shown only in the pages of the Gazette. An annual subscription was 100 francs, the equivalent of over $400 today."

In each of the 70 issues, seven of the 10 unbound prints depicted the most current haute couture designs from the top Parisian fashion houses. The other three prints were designed by the illustrators, often inspired by the latest fashion trends at that time. The prints were lithographs which were then colored in an exhaustive process called "pouchoir", in which the color is applied by hand using stencils to position the color.

Through the magazine, readers were exposed to upper class life in Paris. Anyone with an interest in fashion, art and beauty will be delighted by the gorgeous prints from this journal of good taste.

Which is your favorite lithograph from the Gazette du Bon Ton?

› Haute Couture: The Most Fashionable Books › Lovely Lithographs: From Picasso to Chagall & Miró › A Guide to Collecting Lithographs
Mobile View: Available Not Available