Most Searched For Out-of-Print Books of 2016

HBO's revival of Michael Crichton's science fiction thriller Westworld was one of the best things on TV in 2016. The series, about a Western-themed amusement park populated by robots, also turned a humble paperback, published in 1974, into the most searched for out-of-print book of the year.

Crichton - author of Jurassic Park and The Andromeda Strain - wrote the original script for Westworld, which was released as a movie in November 1973 with Yul Brynner in the lead role as a black-clad robot gunman. 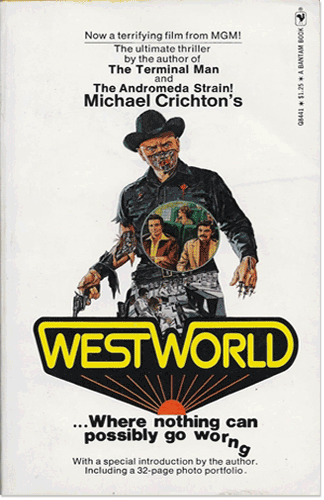 A companion book was published in 1974 by Bantam/Pocket Books but it's utterly out-of-print. The book contains the movie script, an introduction from Crichton, and photographs from the film. It is not a novelization of the Westworld story. We suspect that science fiction fans are looking for this book with the expectation that it's a novel. In reality, it's a little piece of 1970s movie history.

According to BookFinder.com's annual report, there were more searches for Westworld than any other out-of-print book in 2016, beating even Madonna and her famous Sex book. Prices for Westworld begin at $160 with only a handful of copies available. Once the series aired, AbeBooks sold copies of Westworld at prices up to $400.

The 10-part series premiered on October 2 and concluded on December 4. Crichton died in 2008 so any novelization of Westworld will need to come from somebody else if it happens.

One book that just failed to make the top 30 is Bare by George Michael. The former Wham singer died on Christmas Day in 2016 and since then there has been massive interest in this out-of-print autobiography from 1991.

1. Westworld by Michael Crichton
Millions tuned in to watch the 2016 reboot of Crichton's story of amusement park shenanigans and thousands wanted to read more. This is the companion book published after the release of the 1973 movie - there is no novelization of the Westworld story.

3. Permaculture: A Designers' Manual by Bill Mollison
Permaculture is agriculture that works in harmony with ecosystems. Sustainable farming in other words. Surely, there's a market for this book?

5. Encyclopedia of Pieced Quilt Patterns by Barbara Brackman
Crafting books often don't stay in print for long. This one from 1993 was published by the American Quilters Society. Brackman is a quilting historian.

7. Mastering Atmosphere & Mood in Watercolor by Joseph Zbukvic
Zbukvic argues that artists need to use watercolor clocks. A "clock" accompanies every visual example, helping artists anticipate how the condition of the paper will react to various watercolor mixes.

9. Margin of Risk: Risk-Averse Value Investing Strategies for the Thoughtful Investor by Seth Klarman
Copies are scarce of this investing manual from 1991. Taking its title from Benjamin Graham's often-repeated mantra, Klarman explains the philosophy of value investing, and the logic behind it.

10. Alla Prima: Everything I Know about Painting by Richard Schmid
Another painting book. An expanded edition was brought out in 2013. Schmid is one of America's greatest 'realist' painters.

11. Rage by Richard Bachman/Stephen King
This novel is a perennial on the BookFinder.com out-of-print list. It describes a school shooting and King will never bring it back into print for obvious reasons.

12. The Vision and Beyond, Prophecies Fulfilled and Still to Come by David Wilkerson
Published in 2003, this cheerful book, biblical in nature, describes how the world is racing toward Armageddon. After the events of 2016, this might just be true.

13. Sled Driver: Flying the World's Fastest Jet by Brian Shul
USAF pilot Shul fought in Vietnam, where he flew 212 combat missions. He was shot down and so badly burned that he was expected to die. He returned to full flight status and retired as a major.

15. Snake by Ken Stabler
Another football book, this time the autobiography of the former quarterback of the Oakland Raiders, one of the wild men of the sport, who died in 2015.

16. Halloween by Curtis Richards
"Trick or treat or die." Lovely. This is the 1979 novelization of the 1978 horror film that turned Michael Myers into a big name in slasher movies.

17. Parts Work: An Illustrated Guide to Your Inner Life by Tom Holmes
A self help book from 2011 that describes our "inner psychological world" and helps us avoid bad habits.

18. Promise Me Tomorrow by Nora Roberts
Love in Paris! An early example of romance from Roberts who swears this one won't be coming back into print.

19. Portrait of a Killer: Jack the Ripper - Case Closed by Patricia Cornwell
Cornwell combines 21st century police investigation with forensic techniques undreamed of during the late Victorian era to solve these infamous crimes. A good read.

20. Down Through the Years by Jean Shepard
Shepard, who died in September 2016, was a pioneer for women in country music. The singer-songwriter recorded 24 albums. At the time of her death, she was the longest-running living member of the Grand Ole Opry.

21. The Sisters: Babe Mortimer Paley, Betsy Roosevelt Whitney, Minnie Astor Fosburgh: The Lives and Times of the Fabulous Cushing Sisters by David Grafton
Another great read, this time about marrying for money. One Cushing sister married a Roosevelt, one an Astor and the third married Bill Paley, CEO of CBS.

22. Me and My Likker by Popcorn Sutton
Amazing story - no copies available. Buy one if you see it. Popcorn Sutton is a moonshine distiller and a living legend in the mountains of Tennessee. Colorful, obscene - his story in his language.

23. Monte Walsh by Jack Schaefer
A 1963 western novel that was made into a film in 1970 starring Lee Marvin. Schaefer's debut novel was Shane, which became a memorable Alan Ladd movie in 1953.

24. Lost Moon: The Perilous Voyage of Apollo 13 by James Lovell
Lovell is the astronaut who said, "Houston, we've got a problem." This 1994 book is a memorable account of NASA's finest hour.

25. The Making of Star Trek by Stephen E. Whitfield & Gene Roddenberry
The complete history of the original TV series from conception, design and scripting to how the finished product was produced and sold. Handsome William Shatner, emotionless Leonard Nimoy, young George Takei and the first interracial kiss on US TV.

26. The Last Course: The Desserts of the Gramercy Tavern by Claudia Fleming
A cookbook. Fleming rose to prominence as the pastry chef at the Gramercy Tavern in New York. You can now enjoy her desserts at The North Fork Table & Inn, one of Long Island's finest restaurants.

28. The Essential Woodworker: Skills, Tools and Methods by Robert Wearing
Last published in 2010. A simple but much in demand woodworking manual.

29. Women and Men by Joseph McElroy
A big 1,192-page novel that is challenging to read. The plot, which is about families (we think), jumps around in time and features a 'McGuffin'.

30. The Art of Holly Hobbie by Holly Hobbie
Holly Hobbie is an American writer and illustrator, and the name of a fictional character. That character is a little girl who loves cats and wears a patchwork dress. Millions of young girls have enjoyed the Holly Hobbie books, toys, TV series, and movie.

See BookFinder.com's Top 100 Most Searched for Out-of-Print Books of 2015