Leather-bound Books from the Franklin Library 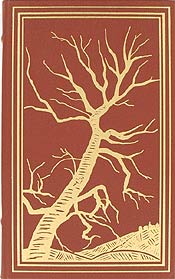 The Franklin Library, a division of The Franklin Mint, was a publisher of fine collector edition books from the early 1970s until 2000. Known for beautiful leather bindings, Franklin Library books were published in three styles - full genuine leather, imitation leather, and quarter-bound genuine leather. The full leather-bound editions were produced throughout the Library's lifespan but the other two styles (imitation and quarter bound) were only published in the 1970s and '80s.

Much like Easton Press, Franklin Library published series of books such as Signed First Editions and Pulitzer Prize Classics.

The 100 Greatest Books of All Time series is among the most collectible Franklin Library collections. Published between 1974 and 1982, the heavily illustrated 100 Greatest Books of All Time collection features remarkable works by literature's most legendary writers. Readers will find Charlotte Brontë, Ralph Waldo Emerson, William Shakespeare, Nathaniel Hawthorne, Goethe, Robert Frost, William Faulkner, Ernest Hemingway, Herman Melville and John Donne among the long list of greats. The full set of 100 can go for more than $3,000, but the most expensive Franklin Library listing on AbeBooks is the 25th anniversary limited edition of The Great Books of the Western World, edited by Robert Maynard Hutchins and published in 1970. The premium full leather-bound 96-volume collection has a price tag upwards of $9,000 and features the likes of Homer, Sophocles, Chaucer, John Milton, and Sigmund Freud.

Special collections aside, Franklin Library developed a following by providing beautifully bound editions that would not break the bank. Despite the care taken in selecting titles for publication, and ensuring lavish, gorgeous and high-quality leather bindings, Franklin Library managed to keep the books from costing a mint. Even today, while some titles are more dear than others, they are still accessable to a wide range of book collecting enthusiasts. Even signed copies can be found for as low as $15, and as a result, these books are a favourite among collectors just starting out, who want to explore beginning their collected libraries with assured value.

As if their beauty and quality didn't make them special enough, the 30 selections on this page are all signed by their respective authors.

Search for signed books from the Franklin Library

Do you own any treasures from the Franklin Library?