Skip to main content
Home The Savoy Cocktail Book: The Coolest Book in the World

The Coolest Book in the World

Without doubt, The Savoy Cocktail Book is the coolest book in the world. It's wonderful for three reasons. Firstly, it's a one-off, the author, Harry Craddock, never wrote another book. Secondly, cocktails, in modicum, will never go out of style. And finally, it's beautiful and perfectly captures the mood of the Art Deco era.

Published in 1930 by Constable when Herbert Hoover was in the White House and Ramsey McDonald in Number 10, The Savoy Cocktail book is now more popular than ever. The most expensive copy to sell on AbeBooks was a rare inscribed 1930 first edition for $9,500 in 2012. Affordable facsimile copies sell by the cocktail shaker load. It's possible that people buy the 1930 editions for the stunning Art Deco cover alone. A green figure sips a cocktail as a zig zag streaks across his heart and a band of angular art runs from top to bottom of the book. 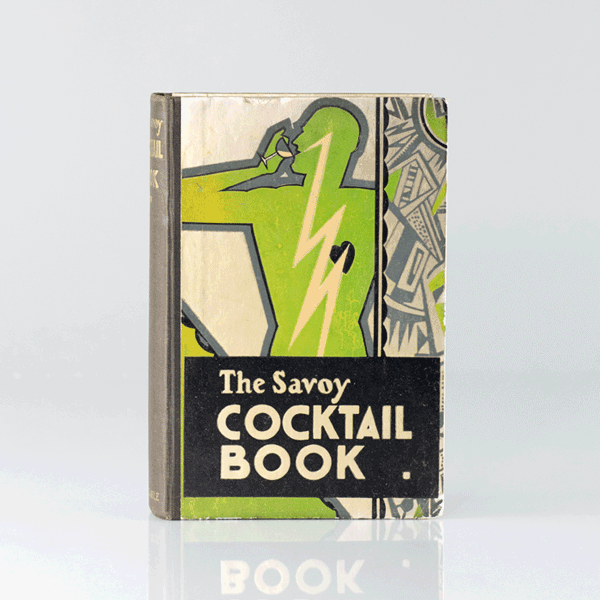 This 1930 first edition, in near fine condition, is offered for sale by Raptis Rare Books for $2,000.

Like all interesting books, there is a background story. Craddock (1876-1963) was born in Gloucestershire but moved to the United States to pour drinks in various hotels in various cities. When Prohibition began in 1920 he headed home to ply his trade. His American cocktail-pouring experience was in demand in London and he became head barman at the American Bar at the Savoy Hotel.

Harry Craddock was once asked what was the best way to drink a cocktail. "Quickly," replied that great man, "while it's laughing at you."

Art Deco to the hilt, the American Bar was, and still is, a special place to drink and has always attracted the rich and famous ranging from musicians to film stars, royalty and sports stars. The Savoy, which opened in 1889, is located on the Strand in the heart of London and remains an iconic luxury hotel in a city filled with luxury hotels. It has a long and glamourous history, which includes having Auguste Escoffier as chef de cuisine. The Savoy is so famous that you don't need to use the word 'hotel' when describing it.

Craddock's book has eye-catching, often whimsical, illustrations in red, black, blue and yellow by Gilbert Rumbold. Very much of the era, there are characters smoking, drinking, eating, dancing, and just looking posh. Slim, fashionable ladies are dotted throughout. Naturally for a book originating from a hotel, travel is a consistent theme in the illustrations.

Craddock's Hints for the Young Mixer

Next to the Black Velvet recipe, there's a glamourous-looking female racing driver (perhaps inspired by Hellé Nice who was a French model, dancer and Grand Prix driver). Spanish dancers are opposite the recipe for the Screwdriver. Beneath the Smiler cocktail, there's a lady photographing a lion while on safari. There's even a tribute illustration to Jerry Thomas, the great 19th century bartender who popularized cocktails across America.

My favorite parts of the book are the footnotes that have been applied to some of the recipes.

Craddock moved to another very posh hotel, the Dorchester, in 1938, and then onto Browns Hotel on Albemarle Street. Although Craddock is one of the most famous barmen to ever pour a Dry Martini, no biography has been written about him, which seems a shame. Numerous books have been written about the Savoy itself. 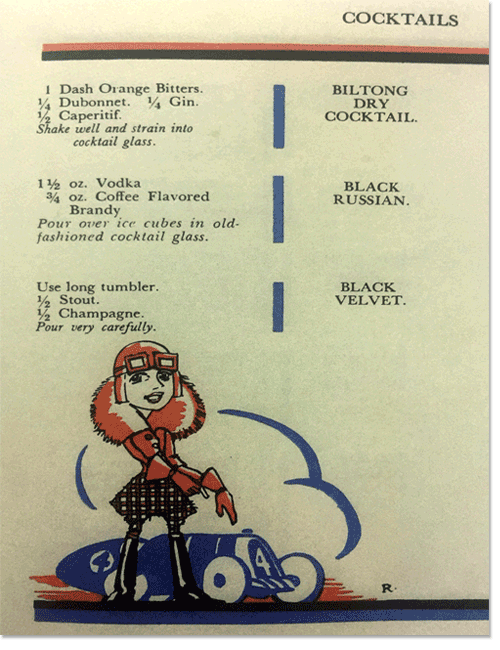 In all, there are recipes for 750 cocktails. Craddock - the so-called "King of the Cocktail Shakers" - is believed to have invented several cocktails, including the Corpse Reviver No. 2 and White Lady. However, inventing cocktails is not an exact science so we always take origination stories with a grain of salt. Aside from cocktail recipes, the book also offers details on coolers, punches, toddies, juleps and other drinks, and devotes its rear section to wine by "Collette" featuring several beautiful maps of famous European wine regions. 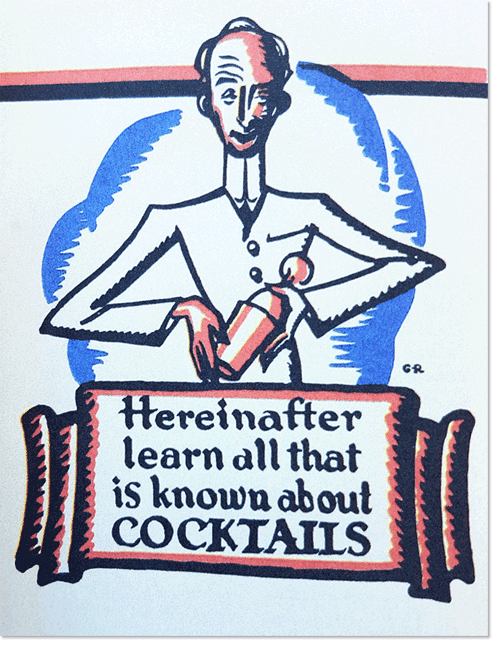 Art Deco graphic from interior of The Savoy Cocktail Book

Loved by collectors of cocktail books, AbeBooks has sold 41 copies of The Savoy Cocktail Book at prices in excess of $500 and demand remains strong. The 1930 first editions are not cheap but later editions can be found at more affordable prices. For a book closely associated to liquid, condition is always going to be important.

Browse all copies of The Savoy Cocktail Book Browse now

Is this really the coolest book in the world?