Once upon a time, long before Gus Gus and Prince Charming, fairy tales were brimming with murder and torture. True love's kiss and happily ever afters were child's play for the writers that came before Walt Disney. Giambattista Basile, Hans Christian Andersen, J.M. Barrie and the Grimm Brothers much preferred a haunting tale over a romantic one, but a few of their most harrowing details have been lost in translation. Do you know Cinderella's wicked secret? How did Sleeping Beauty really wake up, and what's the price for the Little Mermaid's legs? What happened to Snow White's evil queen? Do you know why Peter Pan's Lost Boys never grew up? Keep reading to find out... 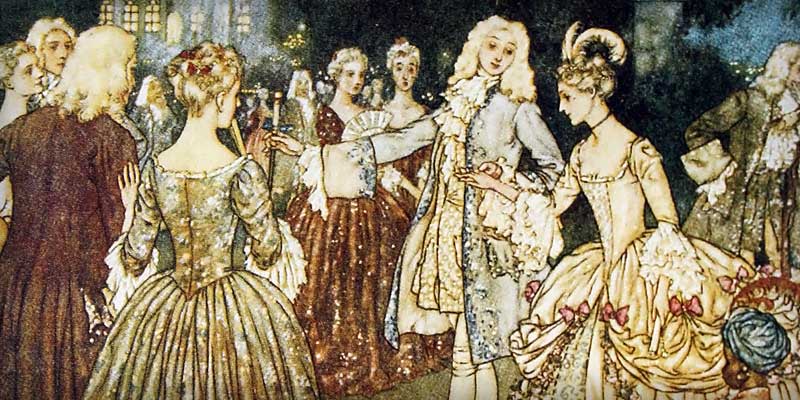 Cinderella can be traced back to China in 9th century A.D., but the western world first met the beloved beauty in 1634 when the story appeared in The Pentamerone by Italian writer Giambattista Basile. With over four centuries between Basile's story and Walt Disney's animated film, there were bound to be some changes to Cinderella's tale...like skipping over all the murder and bodily mutilation.

"...she snaps her step-mother's neck with the lid of a dressing trunk."

In Basile's story, titled The Cat Cinderella, Cinderella's father was indeed a widower who remarried, but what modern adaptations don't tell us is that she in fact snaps her step-mother's neck with the lid of a dressing trunk. Sure, her governess told her to, but she's still a cold-blooded killer. Cinderella's conniving governess then marries Cinderella's father, widowed for a second time, and banishes Cinderella to the kitchen.

Basile's Cinderella is indeed granted a wish and attends a grand feast dressed as royalty. She does lose a slipper (though it's patent and fur, not glass) and she is indeed pursued by a dashing King. In Basile's version, the lost slipper fits Cinderella's foot and the murderer gets her happily ever after. In other early versions, such as Scotland's Rashin Coatie, Cinderella's step mother is a little more determined - she cuts off pieces of her daughters' feet so they might fit the lost slipper. In the Grimm Brothers' 18th century adaptation Aschenputtel, the sisters mutilate their own feet and songbirds peck out their eyes.

The 1950 Disney film was in fact based on French storyteller Charles Perrault's 1697 adaptation. Perrault, a storyteller to the French court, removed the vulgarities and added many magical elements, like the fairy godmother and the pumpkin coach. His Cinderella is as pure and innocent as they come. 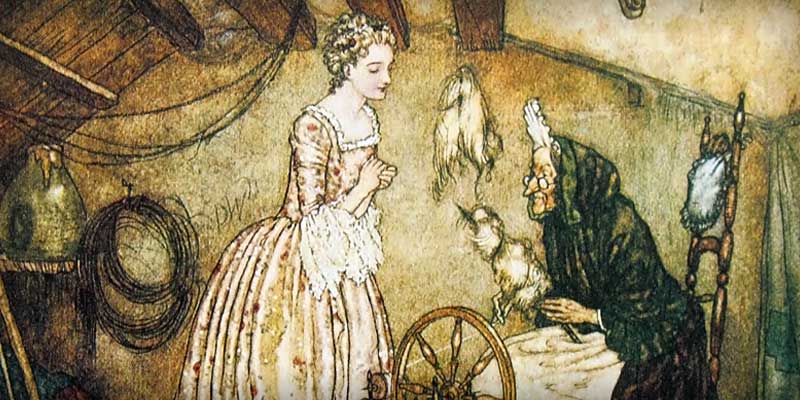 Sleeping Beauty first appeared alongside The Cat Cinderella in Basile's Pentamerone. Then titled Sun, Moon, Talia, the 1634 story begins much the same as the animated Disney adaptation released in 1959. Upon birth, Princess Talia is cursed with the threat of a splinter, and, when grown, is pricked and falls into an eternal slumber. Heartbroken, her father lays her in a velvet chair and leaves the castle forever. Here's where things go awry...

Everyone knows Sleeping Beauty was awoken by true love's kiss, but Basile tells a different tale. A King from a nearby kingdom happened upon the abandoned castle and Talia's lifeless body. Taken by her beauty, the King raped and impregnated the slumbering princess. In her slumber, Talia gives birth to twins, Sun and Moon. Searching for breast milk, a baby sucks the splinter out of his mother's finger and she wakes up. The King returns to see Talia again and is delighted to discover the fruits of his conquest.

"...the Queen discovers her husband's infidelities and orders his babies to be cooked and fed to him."

It's only a matter of time before the Queen discovers her husband's infidelities and orders his babies to be cooked and fed to him. Unbeknownst to the Queen, the cook hides the children and serves goat, instead. When the Queen attempts to throw Talia into a burning fire, the King intercepts and burns his wife alive. Talia marries the King and they live happily ever after as predator and wife.

It was Charles Perrault who introduced fairies to The Sleeping Beauty, or Little Briar Rose, and he replaced the married King with a dashing bachelor Prince. The Prince's mother took on the role of evil queen, and instead of feeding the twins to someone else, she threatened to eat them herself. When the Queen attempted to throw Sleeping Beauty into a pit of vipers the Prince herocially saved his bride while his mother jumped to her death. 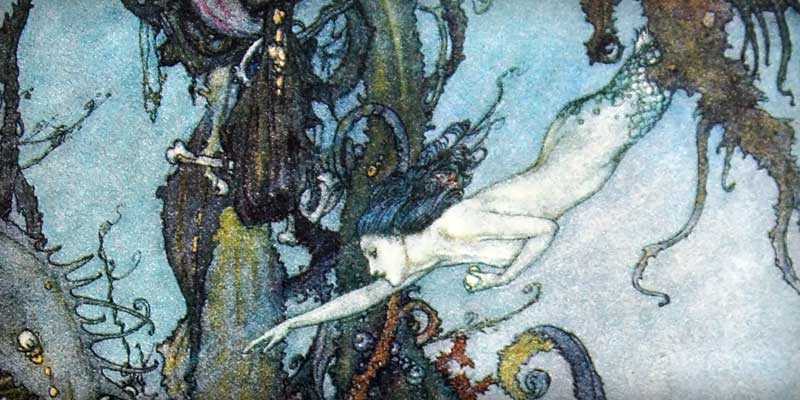 The Little Mermaid was created by Danish writer Hans Christian Andersen in 1837, about 150 years before Ariel was singing Under the Sea with Sebastian and Flounder. Andersen's little mermaid endured a far grislier life than the bright-eyed Ariel we know, and her desire to be human is far more dramatic than Disney lets on.

They say everything's better where it is wetter, but in 1837 our little mermaid certainly didn't think so. Andersen's mermaids were soulless creatures destined to dissolve into sea foam when they died, whereas humans were promised a beautiful afterlife. Terrified of her abysmal fate, the little mermaid wanted nothing more than a human soul, but as her grandmother explained to her, the only way a mermaid can grow a soul is to wed a man who loves her more than anything, and should the man not marry her, she will die. An impossible task for a girl with a fish tail, no?

"As if the pain of a sword passing through her wasn't enough, the witch cuts off the little mermaid's tongue for payment."

When the little mermaid spots a handsome dark-haired prince on shore, her desire to be human only worsens, and as desperate times call for desperate measures, the mermaid visits the Sea Witch to strike a deal, but first she must travel through thousands of polypi, who cling to anything including skeletons and a mermaid they had caught and strangled.

Without even asking her wish, the Sea Witch offers the little mermaid a draught that will give her legs at a high cost: I will prepare a draught for you, with which you must swim to land tomorrow before sunrise, and sit down on the shore and drink it. Your tail will then disappear, and shrink up into what mankind calls legs, and you will feel great pain, as if a sword were passing through you...at every step you take it will feel as if you were treading upon sharp knives, and that the blood must flow. If you will bear all this, I will help you.

As if the pain of a sword passing through her wasn't enough, the witch cuts off the little mermaid's tongue for payment.

What follows is nothing but heart break. The prince loves the little mermaid, but not more than anything, and he marries another woman. The only way the little mermaid can save herself from her imminent death is to stab the prince to death, but she refuses, ending her life on earth and ocean. 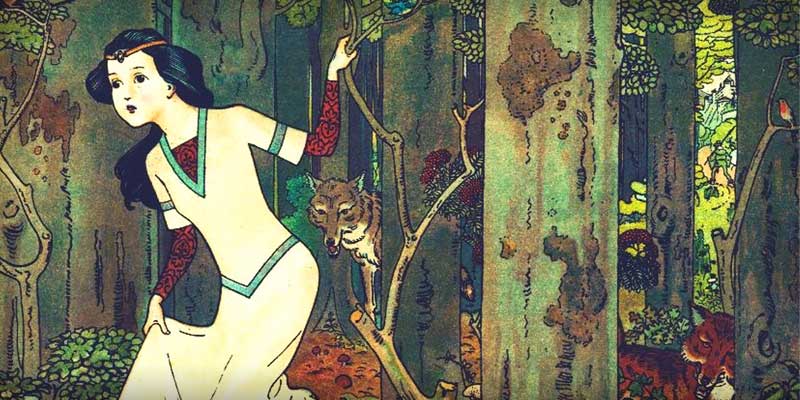 In some early versions, the Evil Queen is in fact Snow White's biological mother which makes her behavior all the more sinister. Disney didn't censor the Evil Queen's attempted murders, but this text from the Brothers Grimm story is horrifying: Finally she summoned a huntsman and said to him, 'Take Snow White out into the woods to a remote spot, and stab her to death. As proof that she is dead bring her lungs and her liver back to me. I shall cook them with salt and eat them.'

Now imagine that Snow White is the Queen's own flesh and blood: Just then a young boar came running by. He killed it, cut out its lungs and liver, and took them back to the queen as proof of Snow White's death. She cooked them with salt and ate them, supposing that she had eaten Snow White's lungs and liver.

"They put a pair of iron shoes into the fire until they glowed, and she had to put them on and dance in them. Her feet were terribly burned, and she could not stop until she had danced herself to death."

In the end Snow White does get her happily every after, and when the Evil Queen attends her wedding, Snow White tortures her to death: They put a pair of iron shoes into the fire until they glowed, and she had to put them on and dance in them. Her feet were terribly burned, and she could not stop until she had danced herself to death.

How's that for sweet revenge? 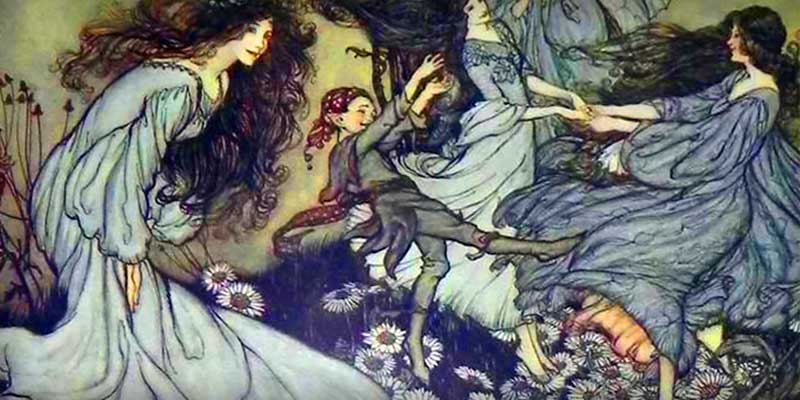 Peter Pan debuted as an infant in The Little White Bird, a novel written by J.M. Barrie for adults in 1902. Readers loved Pan, and his popularity led Barrie to write the 1904 play Peter Pan, or the Boy Who Wouldn't Grow Up. The play, starring the likes of Captain Cook and Tinkerbell, was later adapted into the well-known book.

"...and when they seem to be growing up, which is against the rules, Peter thins them out."

We know Peter doesn't want to grow up, but what Disney doesn't mention is the length to which he's willing to go to fight it. In Barrie's works, Pan is more villainous than mischievous. This excerpt is particularly chilling: The boys on the island vary, of course, in numbers, according as they get killed and so on; and when they seem to be growing up, which is against the rules, Peter thins them out; but at this time there were six of them, counting the twins as two.

If it's not explicit enough for our readers, let us summarize: Peter kills the Lost Boys to keep them from aging.

While we like to think of Pan as obsessed with youthfulness, in fact, he's obsessed with death. It's believed this comes from Barrie's own childhood experience of losing his brother. Barrie's work includes grisly scenes, including Wendy nearly dying after being shot with an arrow, Peter being left to drown, and Hook being eaten by a crocodile. To die would be an awfully big adventure, says Peter Pan in one of the novel's most famous lines.

What's the most gruesome fairy tale fact you know?