Trolling is nothing new. More than 150 years ago, Victorian 'trolls' were using the fledgling postal system to insult people with so-called 'Vinegar Valentine' cards. These anonymous greeting cards, illustrated with caricatures and snarky poetry, were a major phenomenon as the ability to communicate regardless of distance became more accessible.

Surviving examples of vinegar valentines are scarce. For obvious reasons, recipients did not keep them. Today, they are items of curiosity and prices range from $65 to $750 on AbeBooks.com for these hard-to-find items of true ephemera. White Fox Rare Books in Vermont is one noted seller that offers these cards. 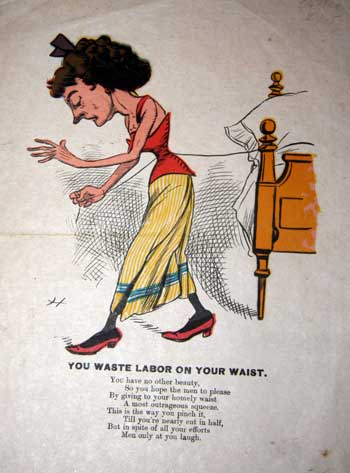 You Waste Labor on Your Waist 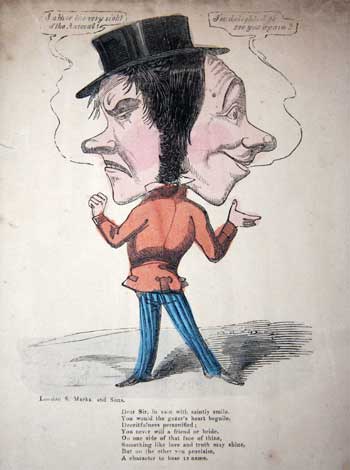 It appears vinegar valentines originated in the United States around 1840 and were used for around 100 years. They were being mass produced by the second half of the 19th century and were also widely used in Britain.

You Waste Labor
on Your Waist

You have no other beauty,
So you hope the men to please
By giving to your homely waist
A most outrageous squeeze.
This is the way you pinch it,
Till you're nearly cut in half,
But in spite of all your efforts
Men only at you laugh.

Annebella Pollen, principal lecturer in history of art and design at the University of Brighton in the UK, is an expert on these insulting cards.

"Senders would buy them from stationers' shops," explained Pollen. "These could be widely found in urban areas by the mid to late 19th century, selling a range of graphic paper products, from decorative prints to news sheets. These capitalized on the massive expansion of popular print culture in the period. My research has shown that the insulting valentines tended to be stocked in so-called 'lower class' stationers, on the 'wrong' (i.e. cheaper) side of town."

It's not clear why they died out. Perhaps card manufacturers realized that love was a bigger industry than hate.

They were not actually cards that open but usually a single sheet of paper or a postcard, sometimes colorful, sometimes plain. The artwork and verse typically mocked some characteristic of the recipient. Gluttons, drinkers, hen-pecked husbands, braggarts, windbags, spinsters, sharp-tongued wives, unfaithful lovers, cowards, lazy colleagues, uncaring bosses, ugly people, fat and thin people, vain people, and stupid people - they were all fair game to folks who posted vinegar valentines. They could be delivered to enemies, or people who had treated you badly, or someone you thought needed to be brought down a notch or two. The tone of verse ranged from gentle to downright vicious and abusive. 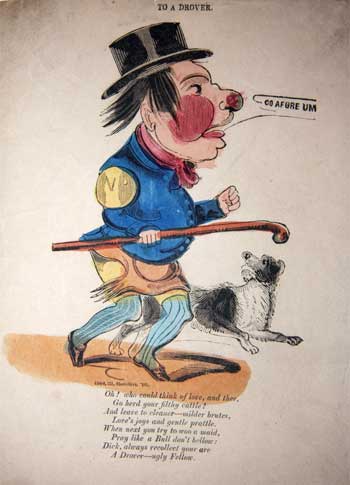 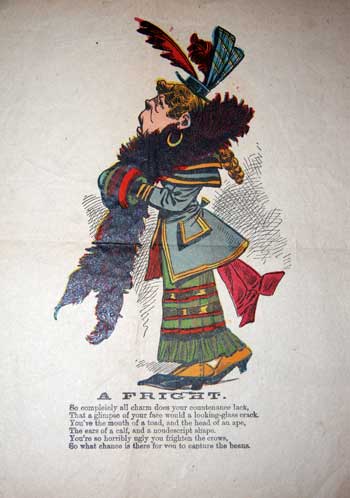 So completely all charm does your countenance lack,
That a glimpse of your face would a looking-glass crack.
You've the mouth of a toad, and the head of an ape,
The ears of a calf, and a nondescript shape.
You're so horribly ugly you frighten the crows,
So what chance is there for you to capture the beaus.

Added Pollen: "There were some public calls for legislation in the mid to late 19th century, although nothing was put into place. Mostly there were morally disapproving campaigns by the press, who complained about the vulgarity of the practice. There were some court cases where criminal charges were brought against people who had been incited to violence or other crimes as a result of sending or receiving an insulting card."

Whereas a nasty comment from an Internet troll can be posted online in seconds, the Victorian greeting card troll had to go out and purchase the appropriate card, buy the stamp and mail it to their victim. That's quite the effort for an insult.

Vinegar valentines were so mainstream that they even appeared in commercial advertising campaigns. Specialist ephemera seller Eclectibles from Connecticut lists a collection of 11 vinegar valentines, published by American soap manufacturer Sapolio around 1910, priced at $175. These particular ones are gentle examples of the phenomenon with a reference to the soap brand squeezed into the verse.

To learn more about insulting valentines, we recommend reading Annebella Pollen's article The Valentine has Fallen Upon Evil Days: Mocking Victorian valentines and the ambivalent laughter of the carnivalesque.

Pollen also recommends taking a look at the Museum of London's digitized collection of valentines cards and the Library Company of Philadelphia's online collection of American valentines. 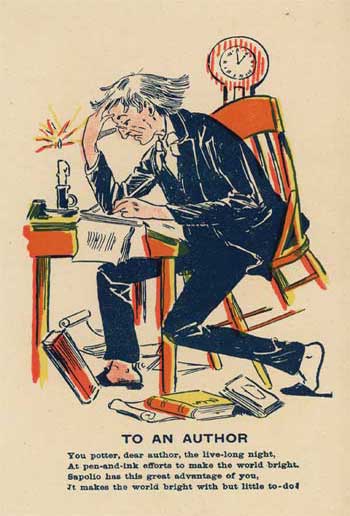 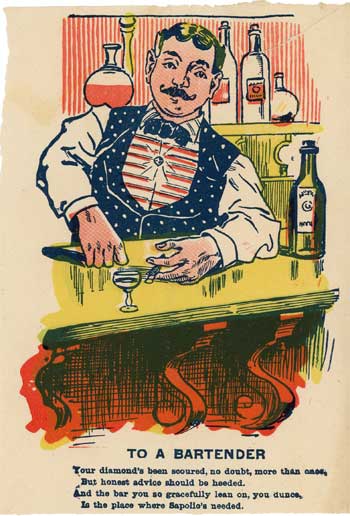 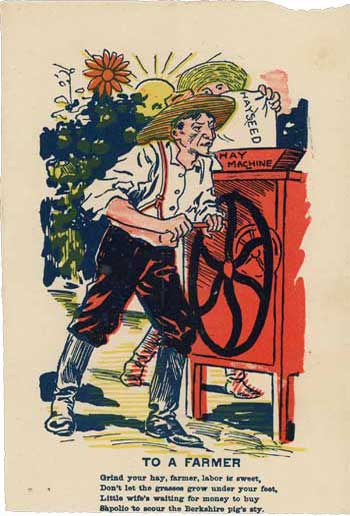 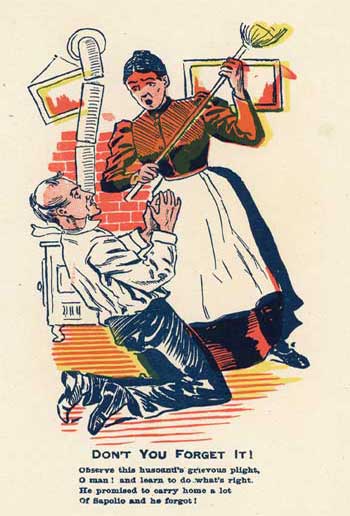 Don't You Forget It! 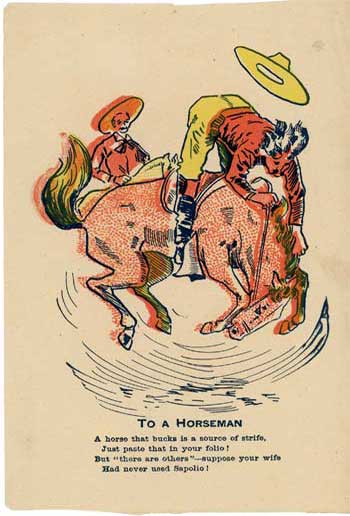 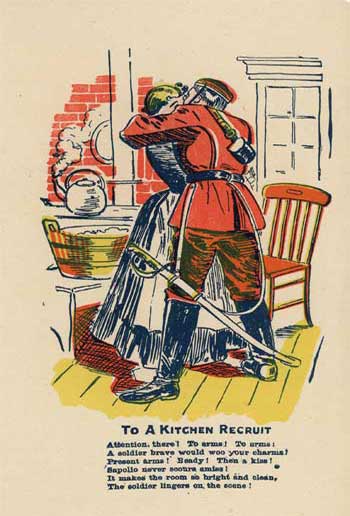 To A Kitchen Recruit 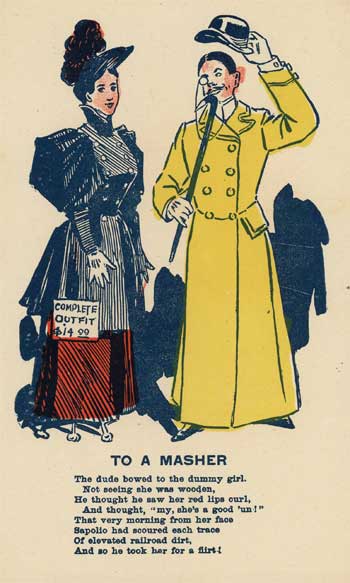 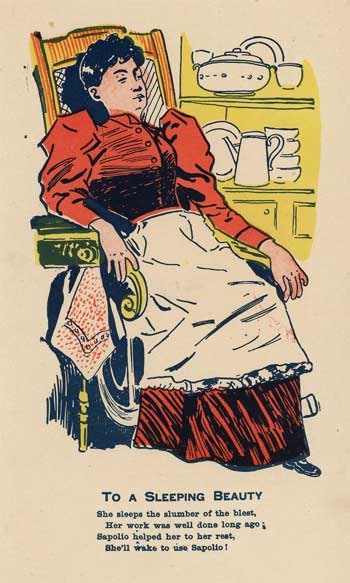 To A Sleeping Beauty 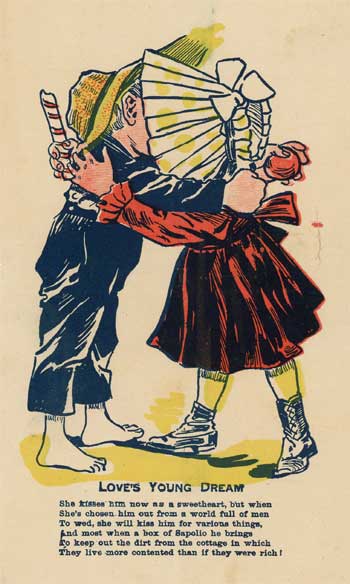 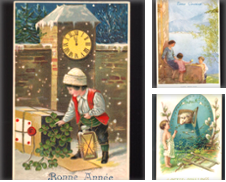 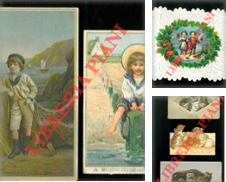 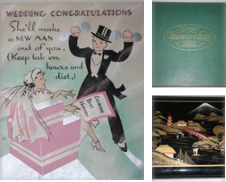 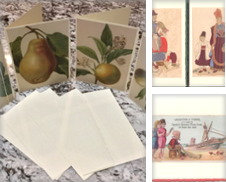 Do you love, or hate Valentine's Day?