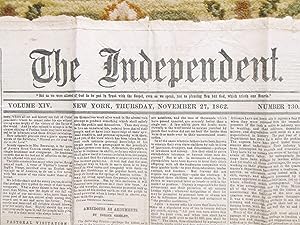 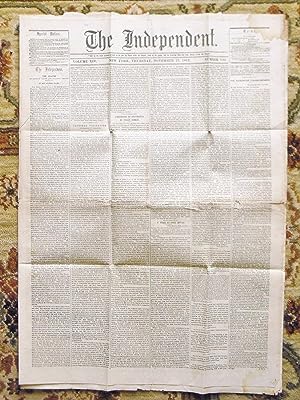 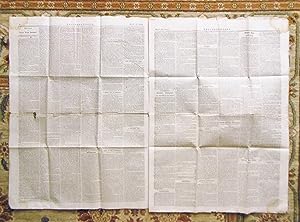 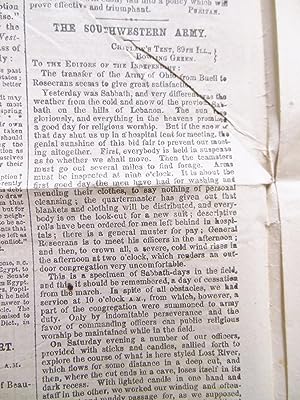 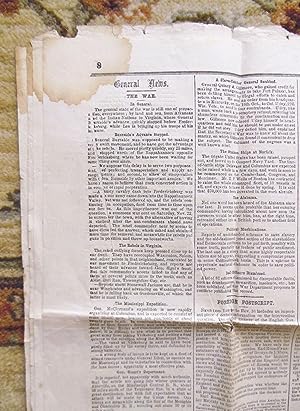 THE INDEPENDENT, NEW YORK, Volume XIV, Number 730, November 27, 1862. Newspaper, 18"x24", 8 pages (2 large single fold sheets). The years 1861 to February 1863 are the papers most important years, as those were both CIVIL WAR YEARS and the only 2 years that the paper was edited by HENRY WARD BEECHER. The paper was strongly ANTI-SLAVERY and as such was strongly PRO-UNION during the CIVIL WAR. This particular issue transcribes a LONG SERMON by Henry Ward Beecher (brother of Harriet Beecher Stowe), and has many articles regarding various Civil War battles. FAIR condition, there is toning at the folds, staining to the corners, holes at some of the places where the folds intersect, some closed tears along the folds, and signs of general handling; nonetheless the paper is complete, fairly solid, and the printing is clear and fully legible. The paper will be sent folded, as was its normal state. About THE INDEPENDENT, NEW YORK (excerpted from Wikipedia): ******The Independent was a weekly newspaper published in New York City between 1848 and 1928. It was founded in order to promote Congregationalism and was also an important voice in support of abolitionism and women's suffrage. From its founding in 1848 until 1861 The Independent was edited by a team of three prominent Congregational ministers: Joseph Parrish Thompson, Richard Salter Storrs, and Leonard Bacon. It was published and financed by a group of New York businessmen led by Henry C. Bowen of the silk wholesaling firm Bowen & McNamee. The editorial policy was strongly antislavery, which hurt the magazine's circulation initially, but it improved through the 1850s to reach 35,000 by the beginning of the American Civil War. In 1861 HENRY WARD BEECHER, who had been a regular contributor to the magazine, became its editor. His assistant editor, Theodore Tilton, succeeded Beecher as editor in February 1863.******. Bookseller Inventory # 000131