Items related to 1939 : the alliance that never was and the coming of...

Home Carley, Michael Jabara 1939 : the alliance that never was and the coming of World War ...
Stock Image 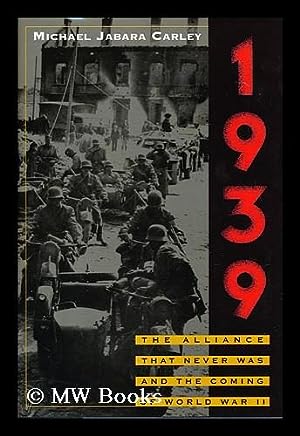 1939 : the alliance that never was and the coming of World War II / by Michael Jabara Carley

Fine cloth copy in an equally fine dw. Particularly and surprisingly well-preserved; tight, bright, clean and especially sharp-cornered.; 321 pages; Description: xxv, 321 p. : map ; 25 cm. Includes bibliographical references (p. [299]-308) and index. Subjects: World War, 1939-1945 --Diplomatic history --Causes. Summary: At a crucial point in the twentieth century, as Nazi Germany prepared for war, negotiations between Britain, France, and the Soviet Union became the last chance to halt Hitler's aggression. Michael Carley's gripping account of these negotiations challenges prevailing interpretations by situating 1939 at the end of the early cold war between the Soviet Union, France, and Britain, and by showing how anti-communism was the major cause of the failure to form an alliance against Hitler. 1 Kg. Seller Inventory # 154953

Synopsis:
At a crucial point in the twentieth century, as Nazi Germany prepared for war, negotiations between Britain, France, and the Soviet Union became the last chance to halt Hitler’s aggression. Incredibly, the French and British governments dallied, talks failed, and in August 1939 the Soviet Union signed a nonaggression pact with Germany. Michael Carley’s gripping account of these negotiations is not a pretty story. It is about the failures of appeasement and collective security in Europe. It is about moral depravity and blindness, about villains and cowards, and about heroes who stood against the intellectual and popular tides of their time. Some died for their beliefs, others labored in obscurity and have been nearly forgotten. In 1939 they sought to make the Grand Alliance that never was between France, Britain, and the Soviet Union. This story of their efforts is background to the wartime alliance created in 1941 without France but with the United States in order to defeat a demonic enemy. 1939 is based upon Mr. Carley’s longtime research on the period, including work in French, British, and newly opened Soviet archives. He challenges prevailing interpretations of the origins of World War II by situating 1939 at the end of the early cold war between the Soviet Union, France, and Britain, and by showing how anti-communism was the major cause of the failure to form an alliance against Hitler. 1939 was published on September 1, the sixtieth anniversary of the Nazi invasion of Poland and the start of the war.
Review:
Any book named after that most fateful of years, 1939, is sure to tell a tragic tale. As Michael Jabara Carley writes in the opening pages of this volume, "This is not a pretty story. It is about appeasement and the failures of collective security in Europe against Nazi aggression. It is about moral depravity and blindness, about villains and cowards." Carley offers a provocative thesis: anticommunist passions in England and France prevented these countries from forming an antifascist alliance with the Soviet Union that might have headed off the bloodiest conflict in human history. This is not a totally original idea, but Carley makes a forceful case that just a few years ago was an especially tough sell: "Cold war ideology tended to overshadow Anglo-French culpability and responsibility for the path to war in 1939." In other words, the anticommunist sentiments that made it so difficult to deal with the Soviet Union during the 1930s also made it nearly impossible during the cold war to blame anticommunism for what went wrong. Carley's tale is not entirely bleak; he devotes a fair amount of attention to "a motley, imperfect group of heroes" who warned about the rise of Nazi power and urged a joint strategy with the Soviets to contain Germany. One of these Cassandras was Winston Churchill, but others have been nearly forgotten. Carley revives them on these pages in a thought-provoking--and certainly controversial--book that takes a fresh look at an old topic. --John J. Miller

With a permanent inventory of 250,000 hand-picked volumes and with publication dates ranging from the 1500s to the present, MW Books has much to offer the conscientious bibliophile as well as the avid reader. Travel and Exploration, European Literature, Modern Firsts, 19th Century Illustrated, Asian & African Political History, British Topography, Regional Art Reference, Signed & Gift editions etc. etc.; we'd love to hear from you - let us know if we can help in any way.


Orders usually ship within 1 business day from our Irish or US locations.
Shipping costs are based on books weighing 2.2 LB, or 1 KG. If your order is heavy or
oversized, we may contact you through ABE's 'Request Extra Shipping' facility
to let you know extra shipping is required.