Items related to Crashing the Gate: Netroots, Grassroots and the Rise... 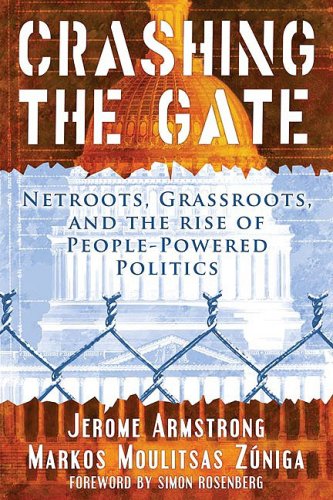 Crashing the Gate: Netroots, Grassroots and the Rise of People-Powered Politics

AbeBooks Seller Since May 23, 2001 Seller Rating

195 pp. Close to new, no markings, very clean. Two pioneers of the political blogging movement expound on how an Internet-based movement can revitalize the Democratic Party and make it more populist. They operate the Daily Kos and MyDD blogs. Worth a closer look in the wake of the Hillary Clinton defeat in 2016 election. Size: 8vo -- 9.25 in. Tall. Seller Inventory # 005086

Crashing the Gate is a shot across the bow at the political establishment in Washington, DC and a call to re-democratize politics in America.

This book lays bare, with passion and precision, how ineffective, incompetent, and antiquated the Democratic Party establishment has become, and how it has failed to adapt and respond to new realities and challenges. The authors save their sharpest knives to go for the jugular in their critique of Republican ideologues who are now running--and ruining--our country.

Written by two of the most popular political bloggers in America, the book hails the new movement--of the netroots, the grassroots, the unorthodox labor unions, the maverick big donors--that is the antidote to old-school politics as usual. Fueled by advances in technology and a hunger for a more authentic and populist democracy, this broad-based movement is changing the way political campaigns are waged and managed.

A must-read book for anyone with an interest in the future of American democracy.

From the Publisher:
There's a powerful new force in the Democratic Party. People around the country are banding together to take back the people's party. Jerome Armstrong and Markos Moulitsas explain how the Republicans rose to power and what the Democrats need to do to take back Washington. This is the playbook for a new century of Democratic leadership.

An online book business providing choice books about entertainers and other celebrities at reasonable prices. Secondary specialties include Art, Business & Investment, Culinary, Crime & Courts, Detective, Gay & Lesbian, Transgender, Media, Paranormal, Politics, Royalty & the Rich, and Spirituality. We are a member of the Independent Online Booksellers Association. For more details, visit our Web site at www.kingchampbooks.com NOTE: Most titles are acquired from charitable organizations. Profits from books in the Church Benefit Center catalog benefit New Church Family, an independent Christian church, which provides emergency supplies to people of all faiths in Daytona Beach, Florida. Thank you for your support.