Items related to In a Dark Place: The Story of a True Haunting 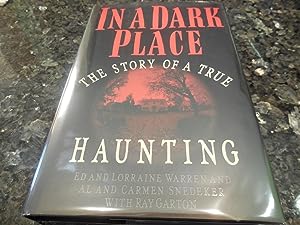 In a Dark Place: The Story of a True Haunting

Title: In a Dark Place: The Story of a True Haunting

An intriguing account of the Snedekers' encounter with the world of the supernatural describes the family's move into a converted Connecticut funeral home and their battle with sinister, inexplicable phenomena. 25,000 first printing. Tour.

This story of the most terrifying case of demonic possession in the United States became the basis for the hit film The Haunting in Connecticut starring Virginia Madsen. Shortly after moving into their new home, the Snedeker family is assaulted by a sinister presence that preys upon them one-by-one. Exhausting all other resources, they turn to world-renowned demonologists Ed and Lorraine Warren the paranormal investigators portrayed in the blockbuster films The Conjuring and Annabelle.

But even the Warrens have never encountered a case as frightening as this No one warned the Snedekers that their new house was once an old funeral home. And their battle with an inexplicable and savage phenomena has only just begun. What starts as a simple "poltergeist" soon escalates into a full-scale war between an average American family and the deepest, darkest forces of evil. A war this family can't afford to lose.

Don't miss the blockbuster films based on the Warrens' true experiences, The Conjuring and Annabelle.

We specialize in all areas of Metaphysical, Paranormal & Occult material with a huge selection of out-of-print UFO books and periodicals in stock. Please visit our website at www.mysticlink.com for all our catalogs in specific subjects, or to search for specific titles or authors.