Items related to FABLES VOL. 4: MARCH OF THE WOODEN SOLDIERS 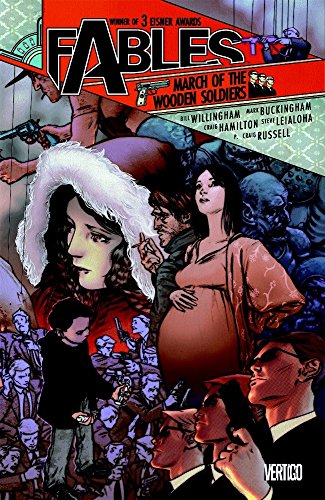 Quantity: 2
View all  copies of this book
Buy Used
Price: US$ 22.50 Convert Currency
Shipping: US$ 4.99 Within U.S.A. Destination, rates & speeds
Add to basket

Bill Willingham's runaway hit series FABLES continues its success in this fourth trade paperback, collecting issues #19-21 and #23-27 (issue #22 will appear in a future collection) and featuring the rise of a new threat to Fabletown. Also included is the Prestige Format Special Fables: The Last Castle. When Little Red Riding Hood suddenly walks through the gate between this world and the lost Fable Homelands, she's welcomed as a miraculous survivor by nearly everyone - everyone except her old nemesis, Bigby Wolf, who smells spying and subversion more than survival. But will he be able to prove his case before disaster strikes? And how will it all affect Prince Charming's upstart campaign to become the new mayor of Fabletown?